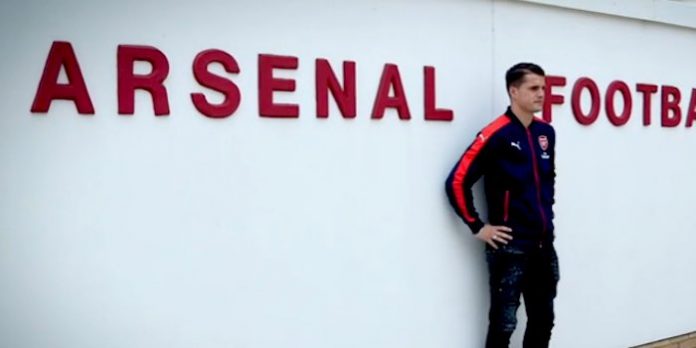 Granit Xhaka has revealed that Arsene Wenger promised him football ‘paradise’ if he agreed to a move to Arsenal.

The 23-year-old, who sealed his big-money move from Borussia Moenchengladbach to the Emirates last month, also spoke of his admiration for his new manager.

“It was madness, he’s a legend for me,” Xhaka told Sports Bild, recounting the first time he spoke to Wenger on the phone.

“He suddenly is on the mobile and wants me. I will never forget his first sentence. He said: ‘If you want to enjoy football, you have to join us. Here is the paradise.’

“He has an incredibly calm but convincing manner. It makes me proud to work under such a coach.”

Xhaka also spoke of the importance of completing his move to Arsenal before heading to France for EURO 2016 – something the Gunners have failed to do with striker target Jamie Vardy.

“It was very important [to complete the deal before the tournament], I wanted it by all means,” said the midfielder.

“It could be very costly if you don’t have a clear mind during a tournament. Then agents or clubs call you all the time, you are just distracted. I am just delighted that everything’s sorted now.”

Touching on the confusion over his new squad number – the Swiss was initially handed the number 16 shirt before plumping for 29 – he said:

“My favourite No. 34 was already taken [by Coquelin], so I’ve picked my year of birth, 92, and switched the numbers around.”

More good stuff from Xhaka and a tasty line from the boss…we wonder how many times he’s used that?

My guess was something along the lines of “You’re making me hard as Granit 😉 😉 😉 xx”.

Maybe things are different on Strikr as opposed to Tinder?

…I now realise that Granit Xhaka is not, in fact, a striker, and hence would be on the trendy new app, Deep-Lying-Ball-Playing-Midfieldr, rather than Strikr

Personally I use High Utility Midfield Playmaker. HUMPr always gets me my man.

One could say when making that joke… You were stuck between a rock and a hard place?

Brings back memories of Arsene on the beach in Brazil wooing Alexis..

Must admit my first reaction to this comment was scepticism. After all, we’ve not exactly been inundated with transfers in the last couple of years, and there’s no reason to think Wenger’s successor won’t be able to attract good players.

But then I read it again, and the word ‘enchant’ changed my mind. Jesus the way some of these guys talk about their first contact with Wenger – it’s like they’ve had a religious experience. It’ll be a real tragedy when he retires because despite his flaws, we really won’t see his like again in major European football.

Yea it’s crazy isn’t it.
It’s easy to forget, because we’re all so used to him for so many years, just how respected he is in world football. The guys a legend.

Big money enchants players much faster and much easier. Aubameyang going to City, Morata to Chelsea, Ibrahimovich to Man U. Wenger had no other choices other than Vardy.

The Stig
Reply to  Nacho de Montreal is tasty

Lewa to Real could also trigger Benz as a possibility, but we dont want blackmailers, do we?

Baaa!
Reply to  The Stig

“but we dont want blackmailers, do we?”
I think we’d make an exception for Benzama.

Somebody wants to get their French arse in gear and get that whole case sorted. If he’s guilty it would be handy to know about it before trying to sign him. If he’s innocent then him, his club, his National team, and any potential future employers are all in bloody limbo.

As I’m a Pom living in Australia I am a great believer in “Innocent until proven guilty”, but all this waiting isn’t helping anybody.

He said Allardyce but Xhaka misheard.

I stay in Santa Clara

Can’t wait to see him play in Arsenal jersey!

and you have to refer to him as ‘bruv’

that explains no.16 situation completely

I heard he actually sang:

that’s should be the song he sings in front of the squad at is indoctrination.

If you love football, you love Thomas Rosicky – I’m starting to see a trend in Wengers game.

Hopefully Wenger can use that line on Rodriguez, Koulibaly, Mkhitaryan and a striker if Vardy stays with Leicester.

Someone needs a work with your marketing team! The horror of opening an Arsenal story and being subjected to Wayne Rooney’s face, and not even his face are being hit with a big stick!!

Wenger has a way of painting pictures with words. I understand what Blogs means sometimes when he says he can listen to the man talk all day. Beats me how a speaker like him fails to motivate our players against certain teams. I’d be running through walls for him. Unfortunately, my footballing skill is a big, fat zero.

“I want to paint you, like one of my French girls”

In all seriousness, when calling for a change in management, we shouldn’t underestimate the pulling power that Le Boss has. There can only be a spattering of managers world wide that have the same sort of draw, especially when trying to lure players who are keen to develop and progress.

The only reason I would ever want to see Wenger retire is to read his autobiography. Would be such a fascinating read.

Dear Jaime I sent you an offer, but you still ain’t calling Bumped your wages and left a substantial goal bonus at the bottom I sent two other offers for Mahrez and Kante Ranieri must not-a-got them He was probably busy tipping the pizza guy or something I eat pizza too when my chef lacks the mental strength But anyways, fuck it, what’s been up man, how’s Jack Wilshere? I know you’ve both been training but i want him fit back here I heard about your wife Rebekah too, I’m sorry I read Twitter was disrespecting her instead of making… Read more »

this is so good

You smashed it mate!

Actually I have should have put a 🙂 on that post, as it’s good to be 51 in my humble opinion. 🙂
COYG!

Smooth is Le Prof!!
Liking what seems like a spending era from the manager. Hope this season he buys for the positions we’re now expecting and his team surprise us on the pitch.
And, as said above despite his flaws (which human/manager doesn’t possess), Arsene is a legend, a one off, and along the way, in the tussle for success we as a fans, let the media take that admiration away. Cherish his days, while he’s in charge! Hopefully he’ll bring us some more of the success he deserves. COYG

Now that Arsene’s pick up line has been exposed, he is in an immediate need of changing it.
Which I am sure he will, being the Playa he is!

Jeez… I actually had to check to make sure that I wasn’t on the Le Grove blog instead.

GET OUT WHILE YOU CAN JOEL!!

I wonder what language Arsene conversed with him in.
Someone should do a list of successful Arsenal transfers with the Language of conversion.

I can’t wait to see Xhaka in the Arsenal Jersey…. I love and admire Arsene much as he has not yet achieved what he deserves to… I think he is yet to to lead the arsenals to triumph..

he told Granit he would be playing alongside magic man Sanogo

When he’s not wooing players on the beach, he is flirting with them on football tinder. Wenger to play James Bond.