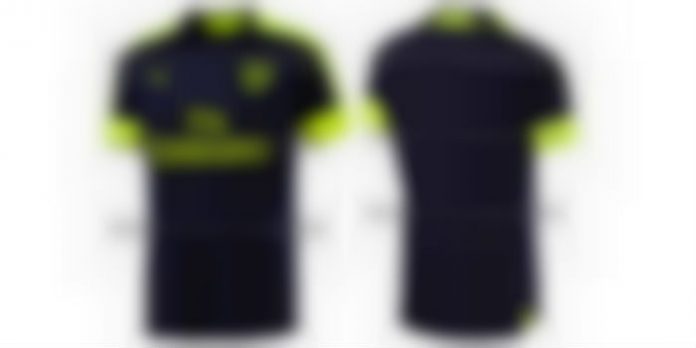 We’ve had some ‘interesting’ third kits over the course of the last decade, with both Nike and Puma treating the shirts like a blank canvas for Frankensteinian experimentation.

It’s got to the point where Arseblog News wouldn’t be surprised if the first team was told to play League Cup matches sporting fishnet onesies.

Thankfully that won’t be the case this season, although we’ll leave it to you to discuss whether Puma’s latest cup kit is any better.

First a trip down memory lane…

…next season, we’ll be wearing the below as our third kit (tip of the cap to Footy Headlines for the snaps). The socks have that delightful, dipped in uranium look. Hmm.

If you’ve not yet seen the new home and away kit, they can be seen here.

Looks like a training kit. Hate it when they change the crest colours. No need.

I personally loved the 2011/12 anniversary crest in monochrome, so to see its return suits me.

Fair enough that worked out more than fine, but to me the anniversary crest was even better with badhe in original colors and the leaves in gold.

Not adverse to a bit of fluorescence, quite liked the 14/15 third kit.
This, however, is just… no, no thank you.

Is the “dipped in uranium” look to allow us to switch off the lights during mid- week games to save electricity?

Stan Kroenke’s £3mil has to come from somewhere…

I like it, just wish it were gold highlights instead of the uranium green lol

No, I love it. My two boys will look great in that!!

and they’ll be safer crossing the street at night.

That design with black and gold would have been nice. If puma guys are taking notice black primary and gold on the strips not the otherway around.

To be on honest I think Puma’s kit design in recent years leaves a lot to be desired. None of the kits they’ve designed for us so far appeal to me.

Looking forward to seeing us lose our champions league dead rubber in this!

Oh no!!! Dear Puma, if you have already started producing, please donate them to traffic controllers

someone should reverse the colours on it. go bright like a lot of those 3rd Barca jerseys…

Don’t want to be that guy but the purple kit was an away kit in the 2012/13 season. Think the third was a yellow kit with maroon shorts.

I’ve got that third kit that was maroon and navy hoops. I’ve got no idea what I was thinking – it’s hideous!

3rd kits are a pointless money making exercise, so by definition they’re all cack, although this one isn’t bad in comparison to the last couple.

This must be some joke right ?

Who gives a shit? It hasn’t got a fucking cock on it, does it? thats a manly cannon, my friends.

Serious question: in the blog today, Bloggs states: “The deals clubs do with their kit manufacturers now mean that what they earn from shirt sales is very small, so it’s just daft to suggest that we’d spend money in this way or for that reason only, because it doesn’t even make sense financially.” Why, then, do we get all-new kits every year? Is it Puma that makes the money here, more so than the club? If that is the case, surely it is in Puma’s interests to come up with an awesome-looking kit? Or is it the case that nobody… Read more »

Puma won’t make all of the money either, as they sell them to the companies that actually sell them to people (there may even be a distributor in between – someone else more knowledgeable may be able to confirm). However, the more demand for shirts there is, the more shirts will be purchased from Puma for ultimate re-sale, so they have a vested interest to make them more desirable, hence why they change them every season (shiny new toy syndrome). The money shirt manufacturers pay clubs is effectively a licence to sell shirts with the club’s logo on. Therefore, the… Read more »

the only sam is nelson
Reply to  Michael

the answer is in the question. the regularity with which kits are redesigned and relaunched is all about the fact that the manufacturers are raking in the takings from selling them. having said that i doubt the club would behave any differently – they just take the profit in the form of the sponsorship deal, which of course simply increases the need for the manufacturer to release 1,826 kits every two years to recoup their investment. as to the need for the kit to look awesome, you only have to look around on any given matchday to realise that club… Read more »

I cant believe it, but I love it!

Honest question: How do they decide the colors/design for a new run; who makes the decision and approvals and how are clubs involved vs what the supplier can make?

Scrolled up twice to get another look..and…still hideous!

OMG! That’s FUCKIN’ HORRIBLE! The worst third kit yet in my opinion! Its really pissed me off for some reason. Get a stripe midway round the socks or the shirt colour on the top 4/5 inches of the sock to break up the horrible boring kit! You know Puma? Like your old kits!!! Fuck me! They were good kits. I always liked the style of the socks. Very Arsenal. And now we get Puma and they go for the classy thin as fuck lines that break nothing up coz u can hardly see em! Pathetic. At least the Home kit… Read more »

I think the original idea was to make neon shirts but the whole stock was just shat on by a load of birds.

*After the barrage*
PUMA: “You know, it looks much better than the original idea.”

Flamini points at you

Is anyone else struggling to get through to the specific blogs at arseblog.com?

I get through to the site in a breeze but when I click on one of the daily blogs it seems to load forever, to infinity, and I become infinitely sad. This happens on this news site straight after games, when I assume everyone is trying to find out what happened and how players performed in the game we just watched, lol. But recently this is happening more of the time.

If anyone could let me know that I’m not crazy..?

2011 we had that blue/teal diagonal kit away and the yellow with maroon pinstripes 3rd.

Either way this season’s 3rd looks crap. Put an unknown betting company sponsor on it and you’ve got a Championship/League 1 away kit right there.

Why does it looks like our boys will be playing for Wigan Athletic? Is this a statement of what we should expect on the pitch this season? Is Emile Heskey going to sign da ting and become that top top top class striker we have been waiting years for? Find out on the next episode of Dragonball Z!

I quite like it. Better then last years monstrosity

I like if, a lot. Does remind me of a Chelsea kit, but usually their kits have nice designs.

Home jersey is really nice too, but not as fond of the away..home or 3rd kit this season, both if my financial advisor says so!

Not the worst ever but its a bit like comparing which bout of violent food poisoning was the best.

I go with this one being the best: http://www.mirror.co.uk/news/uk-news/spurs-in-poisoned-lasagne-claim-624141

I suppose it saves us from ever having to trot out that shite, Red Nose excuse of the players blending into the background and being difficult to see.

(Unless we get to play a match at night, in a stadium with faulty floodlights in Pripyat.)

The sleeves make me want to vomit

I like it.
Its exactly what my younger self would have imagined a futuristic football kit to be.

I think it’s awful. It’s not quite as bad as the kaleidoscopic banana peel from 1995 or the velvet bumblebee from 2011 or the cross between Chel$ki and Man Schitty from whenever, but it’s definitely high on the list of all-time bad kits. It makes my eyes hurt.

Should never play in dark kit, especially at night. Bring back May 1989 Anfield kit please or Invincibles yeller and blue.

For games where we have poor visibility issues?

Since Puma came into the scene, Santi has had trouble scoring. Just saying.

Gotta say I didnt like last season’s third kit at all until I saw it alongside some of the others just now, yikes.
The new one, is that black or midnight blue? Kinda like it.

Made by Puma and uranium dipped – clearly not made to last.

This has been a slow burner for me. Initial thought was “aye carumba!” But now it’s kind of grown on me. Agree with other comments that the shreks piss green probably would have looked awesome if it were gold though.

It’s like those dino rod vans…the colours hurt my eyes !!

Its a damn THIRD kit with a contemporary look. I’m starting to think everyone who comments are there old man who yell at children to get is their lawn

This website uses cookies to improve your experience while you navigate through the website. Out of these, the cookies that are categorized as necessary are stored on your browser as they are essential for the working of basic functionalities of the website. We also use third-party cookies that help us analyze and understand how you use this website. These cookies will be stored in your browser only with your consent. You also have the option to opt-out of these cookies. But opting out of some of these cookies may affect your browsing experience.
Necessary Always Enabled
Necessary cookies are absolutely essential for the website to function properly. These cookies ensure basic functionalities and security features of the website, anonymously.
Functional
Functional cookies help to perform certain functionalities like sharing the content of the website on social media platforms, collect feedbacks, and other third-party features.
Performance
Performance cookies are used to understand and analyze the key performance indexes of the website which helps in delivering a better user experience for the visitors.
Analytics
Analytical cookies are used to understand how visitors interact with the website. These cookies help provide information on metrics the number of visitors, bounce rate, traffic source, etc.
Advertisement
Advertisement cookies are used to provide visitors with relevant ads and marketing campaigns. These cookies track visitors across websites and collect information to provide customized ads.
Others
Other uncategorized cookies are those that are being analyzed and have not been classified into a category as yet.
SAVE & ACCEPT
wpDiscuz
63
0
Would love your thoughts, please comment.x
()
x
| Reply