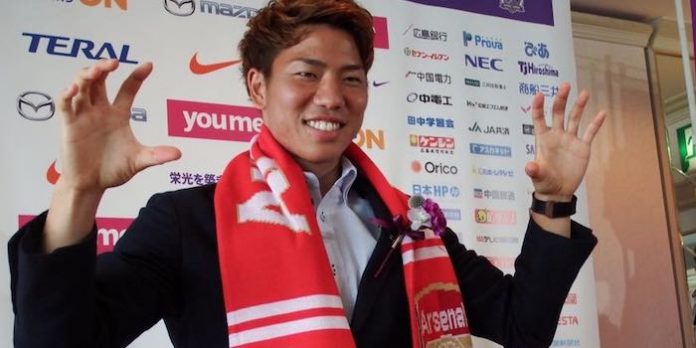 Arsenal’s latest signing, Takuma Asano, says he’s long wanted the challenge of playing abroad and is keen to show his prowess in front of goal.

Although he’s likely to be loaned out next season – with a number of Bundesliga clubs reportedly interested – he’s looking forward to showing people what he can.

“I am glad that I can have a challenge overseas, which I have always wanted,” he said.

“I want to play aggressively. I want to score many goals on the pitch, performing with my quick moves and eagerness.”

Quick moves and eagerness sounds a bit like a rejected Oasis album title, but still.

For a bit more on him, this interview with a writer for Japan News is interesting. He describes Asano as, “Incredibly fast and particularly good at one-on-ones. He is perhaps more of an instinctive finisher though, and is slightly less accurate when he has time to think.”

Can’t think who that reminds me of … still, the whole thing is worth a read.

One for the future, at best (I guess). But he’s got to drop the groping hands gesture, it looks simply… strange.

It is the jaguar pose

Yeah. Boobs are too wide.

Mate, if it means he’ll score goals, i don’t care if he brings an inflatable doll and gropes it.

and you guys moaned about vardy’s stance on race?

I hope he’s no Gervinho :S

If has better luck with injuries than Ryo we might be on to a great player.

Hope he turns out to be a quality player for us! Looking forward to seeing him in action!

Looking forward to seeing him on loan next season, good reason to watch the Bundesliga – hopefully the fans of whoever we send him out to are less narrow minded, fickle or racist than some of the vocal Arsenal ‘supporters’ spouting nonsense on the internet about this signing and actually give the lad some encouragement.

(I’m not talking about fans on Arseblog by the way, who are a far more intelligent bunch)

I am going to say something invariably unpopular but he is here to sell shirts in the far east. A marketing decision not a football decision. On the other hand the Japanese national team will benefit from his further development if he remains injury free …

Do yourself a favour and listen to yesterday’s Arsecast. It will illuminate your thinking.

It’s now clear you know nothing about marketing.

Arsenal doesn’t buy players to sell shirts but there are cases in the football world. Even though James Rodriguez is a very talented player, he was bought by Real for them to be even more popular in Columbia and South America. Real almost recouped half of his transfer fee before he played his first game for them.

I trust Arsene enough to believe he would not waste his time on a shirt sales signing.
Kid’s got talent.

I thought Blogs wrote well on the shirt-selling theory, yesterday I think.
It’s not worth it financially and actually a bit patronizing.

I think if signing Asian players just to sell shirts was such a money maker then I’d expect every premiership club to have their own Asian player to boost profits..

I see he’s ready to deploy the five point palm, exploding heart technique on any opposition defenders who get in his way.

Clearly these are the unique skillsets that are driving this signing

The Buddhist Palm is not a technique to be trifled with, I want Arsenal to win the league, not indefinitely suspended for war crimes!

But what if he uses it only on Spurms players and cunts like Costa or Terry?

Who.s that guy at leicester…ohhfuck it, he helped them win the league! Shirt sales bonus!

And yeah i do know his name

it baffles me how some fans got angry at the signing of an “unknown” when the same fans also take offence at the face that we no longer unearth hidden talent. Pointing towards vardy, mahrez etc. the question is if u don’t give a chance to the takuma akano’s of this world how do u find a hidden gem? but i must add that this does not imply that proven players should not be signed , just that one or two akano’s in the squad will not harm it.

May he be more a Honda and less a Miyaichi.

I’m more hoping for a Nissan Skyline GT-R and less of a Honda tbh.

He may not be as beautiful as Ryo *swoon* but I will now be an early investor.

Best Japanese players currently plying their trade in Europe is probably Okazaki and Kagawa. So Asano will have to raise the bar if he is gonna make his way in to our first 11.

Hope he proves a gem, But I wont hold my breath.