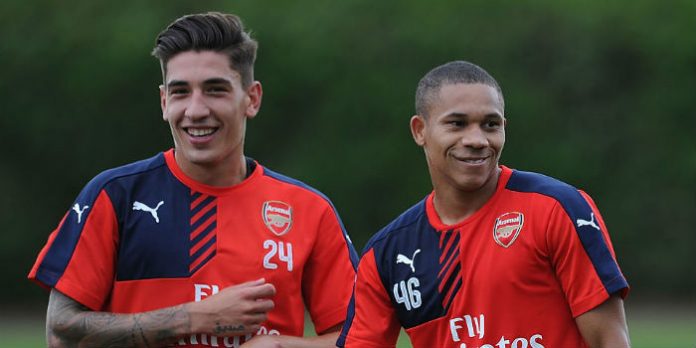 After 2392 days, six loan spells and precisely zero appearances for the first team, Wellington Silva’s time as an Arsenal player is officially over.

The 23-year-old Brazilian, signed as ‘one for the future’ way back in the past, has returned to former club Fluminense on a permanent deal.

Much like fabled South American counterparts Samuel Galindo and Pedro Botelho, the winger never really came close to first team action at the Emirates; initial excitement over his signing dampened by work permit issues in his early years on the books.

While Wellington did finally get a run out in England last term, his spell at Bolton Wanderers, who were relegated from the Championship, was never going to be enough to turn the head of Arsene Wenger.

Speaking about his return home, Wellington told Fluminense’s website: “I am very happy. I want to thank Fluminense for this opportunity to return after so long, I’m eager to start. I am very anxious, it really is like the first time.

“The desire to return has always existed. When I learned that it was possible to return ten days ago I was nervous, anxious. I am very happy and I have no words. Now it is time to train and get onto the pitch as quickly as possible.”

The lad returns to Brazil with a European adventure under his belt and will no doubt be hoping to make an impact in his homeland. He’s still ridiculously young and has more than enough time to try and live up to the potential that saw Arsenal splash out £3.5 million.

Good luck Wellington. We mean it so much we’re not even going to use the ‘boot’ pun.

All the best to the bloke

Hey, fellow gooners, a bit off-topic, but is there anyone who’s been at Anfield for the away game that can tell me how to get myself tickets (obviously not now, but to know). I’m from Chile, but I’ll be around for the match at Liverpool in march, so I looking forward to go. Any help will be fully appreciated 🙂

I don’t want to dampen your enthusiasm, but it’s almost impossible to get tickets to an away match if you haven’t already attended a lot of away matches. The ticket scheme for members of foreign supporters clubs normally works only for home matches.

But that said, it never hurts to ask. There aren’t many supporters clubs in South America, but here’s a link to the official list of them: http://www.arsenal.com/supportersclubs/south-america. Contact someone at one of these clubs and ask if they can help you out.

Good luck to you. Anfield would be an awesome away match to get into!

As noted – tough to get tickets in Arsenal section. You can check to Liverpool site for game packages – lunch, programs, tickets. Pricey and sitting with home crowd but you will get into the match.

Thank you both! It’s a pity there isn’t an official supporters club in Chile, we are many! Some of us have been following since a lot of time ago, but with Alexis moving in there’s been a huge boom of popularity for the club.

Anyway, I’ll keep moving until I find something! Cheers from Valparaíso!

But it takes someone to start a fan club, no? Start on like I am trying to do in Kenya.

Has to be the most pointless purchase-and-loan signing in the history of the Arsenal, not even a single game for us. Can I please have back the 42 cumulative minutes I spent reading updates about each of his loan spells?

why did wenger never give him a fair chance in pre-season to show what he can do? Some players always perform much better when their teammates are of much better quality than Championship material.

Some players get a 100 chances, others get 0. weird

Wenger did give him couple chances to perform but it was ‘not good enough’ and the quality was ‘not there yet’ from his viewpoint. Even if he performed well, in the end Wenger held the last call and was too good to be a coach for him.

Are you Wenger’s secret assistant?
The boy never played for the first team once; not even behind the scenes or trained with. This was usually when the first team were training themselves, so unless Wenger can be in 2 places at once, you couldn’t possibly know that’s what happened.

No big deal
Reply to  ArsenalANewDawn

Why try to read more into these situations than there actually is ? People do this on here every time a player leaves & it’s pointless.
The overwhelming majority of young players at a big club don’t make it….and the overwhelming majority of those don’t make it simply because they’re not quite good enough. There’s no shame in that. Good luck to the lad back in Brazil. We move on. End of.

I remember hearing stories about him destroying clichy in training when he first signed for us. It’s a pity we never got to see him get an opportunity at Arsenal, not even in pre-season.

When he’s in the mood’ he’s a real live wire. A bit Alexis like in the way he makes things happen.
But his problem was consistency. He’d be man of the match one game then you’d hardly notice him on the pitch for the next 2 or 3 games. He’s at the age when he should be improving his consistency and maybe that’ll happen next year, but maybe never…

Ever cloud has a silva lining.

I’m in Brazil at the moment – Rio de Janeiro to be exact – and I can tell you Fluminense are very happy to have him back. A shame things never worked out for him at Arsenal. Have a suspicion his card was marked fairly early when he ran into immigration problems …

I’ve got nothing against the lad.

I’ll make a bet he will return back to Europe in the next few years.

I have a feeling he’s the next to do an Afobe.

Speaking of which, if be much happier having Afobe in the team right now rather than Sanogo (the boy we brought in that seemingly pushed him out).

Sanogo wasn’t bought to ‘push out’ Afobe.
Afobe was always (really always) injured when he was needed.
I’d guess that if we’d got an offer for Sanogo instead of Afobe then he’d have gone instead.
It’s all just ‘circumstances’ with Afobe which is really regrettable.
I didn’t want them to sell him but he had to get games which wouldn’t have happened if he’d stayed.

Good signing.
But what does this mean for Chambers?

Next out without kicking a ball arsenal is toral, precisely next year when wenger bows out unceremoniously.

Shame Wellington wasn’t strong enough to Duke it out with the rest of the squad.
I had high hopes for him. Best of luck to him for the future. He’s still got immense talent. Just needs to apply it properly.

Good luck to the lad but, if it hadn’t been for Arseblog, I would never have heard of him and I would be no poorer for that. Just saying.

And he was dubbed the “New Neymar” lol