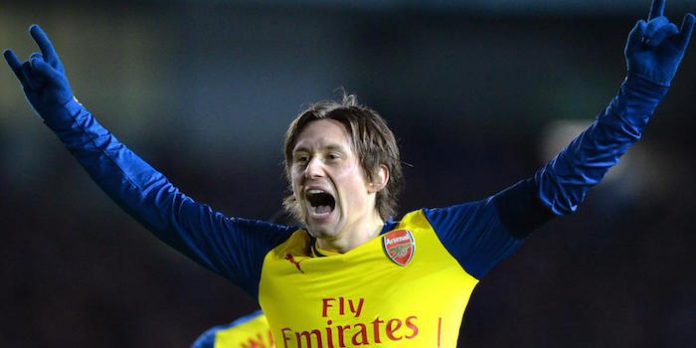 Tomas Rosicky is set for an emotional return to Sparta Prague, 15 years since leaving his boyhood club.

The 35-year-old midfielder has been training with Arsenal in recent weeks in an attempt to overcome a thigh injury he picked up playing for the Czech Republic at Euro 2016.

He’s due to be confirmed as a Sparta player at a press conference this afternoon.

Tomáš Rosický is going to return to his 1st club @ACSparta_EN Press conf. announced for the afternoon. @EuropaLeague pic.twitter.com/GGqIH2fTNL

Super Tom spent a decade with the Gunners after a big money move from Borussia Dortmund in 2006 scoring 28 goals in 246 appearances.

Arsenal bid farewell to the midfielder on the final day of last season when he was presented with a silver cannon and a guard of honour to recognise his achievements at the club.

Best of luck to him back at Sparta. We’ll be keeping a close(ish) eye on him from afar.

Rosicky on Wenger’s exit and his farewell match invite list

Glad he’s carrying on. All the best, Tomas!

Best of luck to you Tommy! #TR7Forever

They should have given a small statue (the size of the silver cannon) of him hitting the ball with the outside of his foot.

While in sliding pose..

Danny Rose, is that you with the thumbs down ?

Could have been one of the greatest, damn you Gids of Injury! Damn you all to White Hart Lane!!
*sobbing on my knees

Rosicky My Man!!!
Will never forget the tiki taka partnership with Hleb and Fabregas. Amazing player!

Alphie
Reply to  Gooner by Blood

We dominated teamsteams. Put them into submission by force but in style. Loved partnership

Yes good point, Hleb should have stayed with us,his carear faltered at Barca, Cesc was great, I get most upset when our fans boo him, good luck tom

Outside of the foot!

And those slide tackles…

This is Sparta!
This takes me back to that movie scene!
Rozza forever and ever!

There’s a ground pass he hit with the outside of his boot two seasons back in the left side of the pitch almost 70m. Glorious. Magical.

Was even replayed on motd. Drooling is an understatement.

Gonna miss him. Really feel his career could’ve been more.

Can somebody be kind enough to post a video of that. #TR7

Rosicky: Star player at Arsenal in a tough period, Legend at Arsenal ALWAYS. <3

I wish we would have given him a proper testimonial. The guy deserved it. Best of luck little mozart. By far gave me some of the best memories in an arsenal jersey over the past decade. Pure class.

The Ghost of Pete Storey

A fantastic player whose best years were blighted by injury. Best of luck in Prague.

He was the reason for both FA cup victories.

Not normally a fan of testimonials, but hope this man gets one so can finally get a real send off and thank-you from the fans.

Best of luck you legend! Here’s hoping for a Sparta v Spuds Europa league tie (if Spuds scrape through via 3rd place) later in the season and the inevitable super Tom winner!

Too sad we couldnt see more of you Tomas, what a player! if not for injuries there definitely would have been a statue of you doing the ‘outside of the boot’ pass.

I’d rather a rotating one of him doing a pirouette.
That would be awesome.
Tutu optional.

Off to youtube to watch countless videos of Rosicky again

Indeed, why would he not get a testimonial? He was 10 years with Arsenal. Is it because he’s not retiring?

Love the guy – all the very best of luck Tommy

All the best for him, great player

I love that man. All the best to him! Now I just have to recover from shedding a single, manly tear.

Good luck TR7. My favourite Arsenal player of the last 10 years.
Hope he can get over the injuries for one last hurrah.

As a 30 year old he was an Arsenal player for a third of my life which is a fair old chunk. With Fabregas & Cazorla, he was probably my favourite player of the past ten years. Such elegance on the ball, great skills in ghosting past players and when needed he had some strike of the football. see Hamburg away 2006. I will definitely keep an eye on the Little Mozart. Legend

Any chance of Sparta playing Spurs? I’d pay good money to see another stonker past spurs from SuperTom.

Love him. Bittersweet to contemplate what might have been but for injuries that robbed him of so many games.

God I miss this guy.

God I miss this guy. He was Arsenal the way Wenger is to me, somehow. Lesser degree, but the same sentiment.

Tomas the Legend, one of my favorite players besides Bobby Pires.

Really wish nothing but the best for TR7. Good luck, Tomas!

Mr Blogs any chance of a compilation of his best goals 🙂

the little mozart may not have a statue erected for him at the emirates, but he will forever remain one of my best players.

An absolute legend. I wish him all the best at Sparta.

Oh, that tika-taka goal against Sunderland! I was actually at the match for that one, sat at the front of the upper deck right behind the goal he scored into. One of the most magical moments of my far too infrequent visits to London.

Just scored a screamer with the outside of my right foot in tribute.

It was in my back garden and the keeper was a labradoodle but it still counts.

My favorite Arsenal player.. Will miss the buzz he use to bring to our midfield.