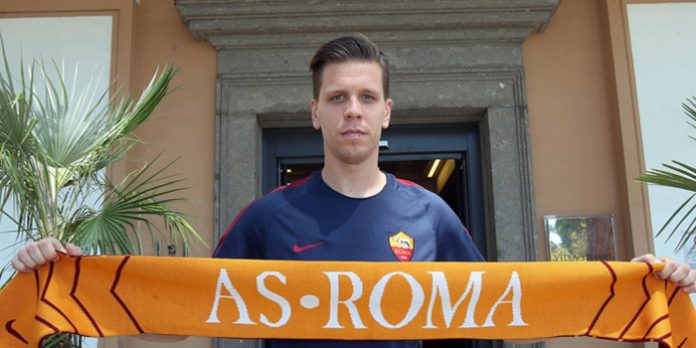 It has been confirmed that Wojciech Szczesny will spend a second successive season on loan with AS Roma.

The Poland international made 42 appearances for the Serie A outfit last season impressing between the sticks as the Giallorossi finished third behind Napoli and Juventus.

It’s long been rumoured that Szczesny would return to the Stadio Olimpico even though Roma pushed ahead with the summer signing of Brazil international goalkeeper Alisson from Internacional.

Speaking about his return to the Italian capital, Szczesny said, “I am very happy after a good season I had a chance to come back and I’m glad that the coach wanted me.

“I hope that we will improve what we have built in the last championship.”

Szczesny hasn’t played in the Arsenal first team since the 2015 FA Cup final after being replaced by Petr Cech as the club’s first-choice keeper last year, and rejoins Roma despite the fact they have already signed Brazilian stopper Allison this summer.

Good luck to him, we still have a szczoft szczpot in our hearts for Wojciech. It also means that David Ospina’s departure is now basically impossible, so the Colombian will understudy Cech again this season.

Saw something at one point that indicated it was going to be a permanent deal. Glad its another loan but eventually Wenger is gonna need to figure out what’s going to happen with Cech, Ospina and Szczesny. Loaning Szczesny is just a temporary fix. Cech has at least 2-3 more seasons in him.

Blogs! Having trouble opening a lot of your news pages!

Yes, we have some issues. Working on them.

At what point does Martinez become a suitable no.2? I think he has looked absolute quality every time I have seen him play for us but how does he get the experience he needs? Personally, I would be fine with him as our no.2 this year. Of course the risk of a serious injury to Cech would be catastrophic as I don’t think Martinez is ready for a massive chunk as no.1 but as a no.2 who plays the cup games I think he would be great. He could then build on that with the prospect of becoming the no.1… Read more »

Please Ospina kick the Mourinho loving Cech to the bench.

Anyone else having problems with the site at the moment?

I can’t get into the Mustafi article at all. Whole site is quite slow.

I want to know who is in the Norway/Sweden squad!!! 🙁

A Different George
Reply to  Paul

The official site has it.

Reports in the last few weeks had him leaving Arsenal permanently or giving Roma an option to buy. I’m really glad to see that isn’t the case as I reckon it would have been a huge mistake. This is the best option for all parties involved – Szczesny gets more quality experience and Arsenal have clarified the goalkeeping situation for the coming season. Wish him the best of luck at Roma – hopefully he’ll come back to challenge Cech for a first team place!

Good move to loan Szczesny. Ospina was pretty good in the Copa America competition and Wenger would have known that. He deserves to be No. 2. Maybe a loan move Martinez would do him good.

My Dearest Bloggs this site is banjaxed quite a lot recently, clearly due to its popularity (doffs cap) you may want to consider spending some money on an upgrade to your server?
Get the advertisers to pay for it?
Arsene wouldn’t! 🙁

I’m on the site now and can see a couple issues. Upvotes and downvotes are not working, couple articles not loading. But I must say I never noticed it before now. I always just use the mobile app and haven’t had any issues.

How much money do we get

Happy with that. Ospina the better keeper and has already showed he has the right temperament to understudy Cech.

He looks absolutely delighted to be going on loan again, doesn’t he?

Martinez could probably do worse than a young szcz and go to Bradford or the like on loan for a season. With us using one of the youth keepers behind him in the very unlikely event we need the 3rd choice

Szcz looks absolutely buzzing to be there!

You’re so lucky the site is broken right now, otherwise you would get such a thumbing (down).