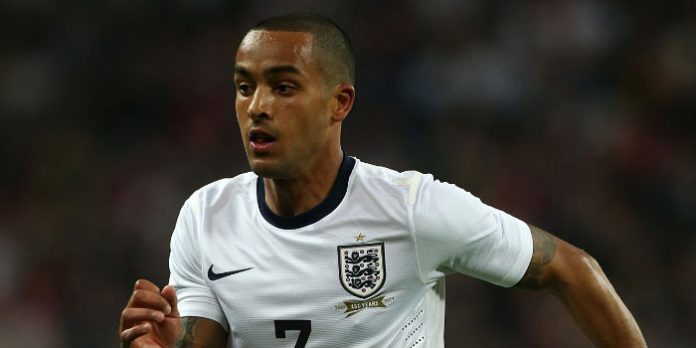 Sam Allardyce has called up Theo Walcott to his first England squad for the upcoming World Cup qualifier against Slovakia.

The attacker returns to the national team set-up having missed out on selection for Euro 2016 after solid performances in Arsenal’s first three Premier League games of the fledgling campaign.

After yesterday’s victory at Watford, Arsene Wenger said he was hoping for a renaissance from the player he signed as a 16-year-old.

“I said before the season started that we will get a different Theo Walcott this year,” the boss told Arsenal Player.

“If he can maintain that focus, that desire and that fighting attitude then he will have a great season.

“I hope he has no setback because he is an intelligent player, he is focused and has a great desire to prove his critics wrong and he’s on a good way.”

Walcott is the only Gunner in the 23-man squad; neither Jack Wilshere and Alex Oxlade-Chamberlain have been included…thereby saving themselves from the horror of showering with a naked walrus.

Fair play to him, his workrate yesterday was much, much better. It was a very encouraging performance. He’s ahead of Ox for me right now.

Completely agree with both of you!

every team fan is fickle

I didn’t agree with you yesterday, Paul. But today that makes a lot of sense.

Thanks but I’ve changed my mind…:-)

Tbf… Theo and Ox are fickle players. In fact pretty much our whole team has been fickle for over a decade now. I’ll never forget how we beat Barca 2-1, and then lost the cup final to birmingham 2 weeks later.

I think Wenger has told him to work harder on workrate. He could do himself a favour by providing an assist now and then and show he is a team player. Wilshire is going to struggle to get a start in the midfield with all the competition. I think he could the 70th minutes sub. I wonder if he’ll go out on loan to get a starting place.

First of all, I agree with you on the part that Wenger must have asked Walcott to work harder.. Because I remember at the start of the season, when Theo came out and explained how he wanted to be a winger again..Wenger took a sly dig at him and said he is not good enough as a winger because he just can’t track back!
That must have irked Theo in his ass.

And on the part about loaning out Wilshere! Are you kidding me? Of course till he proves his fitness he is going to be a 70th minute sub. But after that he is a starter for me in the team. Inspite of all the midfielders we have got in the club..He is probably the second best midfielder or something.. maybe behind Ozil and on the same level as Santi. Definitely ahead of The Ox.. who for some reason just can’t deliver what is required of him!

Yeah, but its such a shame that it has taken him 10 years to apply himself. Ultimately its not hard to improve, work rate, defensive + offensive understanding, first touch; they’re the areas of his game that consistently let him down – and if he wanted to, he could of easily work on all of that if he wanted to. Like how he has he not realised that all he has to do is knock the ball into the space behind any full back / centre half, then open up the tap and leg it past them? its school boy… Read more »

“neither Jack Wilshere and Alex Oxlade-Chamberlain have been included…thereby saving themselves from the horror of showering with a naked walrus.”

Will do his confidence some good and we can reap the rewards as a result.

And the medical bill.

It’s really sad to see Gibbs’ decline from one of the most promising young left backs England had a few years ago to now being behind Rose in the pecking order. Luke Shaw no doubt is a massive talent but would have loved to see Wenger bring in Ricardo Rodriguez this season and send Gibbs out on Loan to strengthen his case for the England first team.

I think Wilshere and the Ox need to prove themselves before they get back into the squad, which I hope they can do. Jack, especially, needs to get games under his belt; however I fear they may both struggle in that respect. On the other hand, if Theo continues the way he’s started the season, he’ll be in contention to get picked. And Danny Welbeck will get into the squad when he’s fully fit again.

The fact remains that there is no England player who plays like Jack when he is at his best (Ross Barkley showed a little of that in the past).

Wengaboy
Reply to  A Different George

When was the last time, Wilshere was at his best though? Do you even remember? Is he even capable of bringing that back? Can’t say till he proves it on the pitch.

I’m not gonna ask why the coach needs to get in the shower after games.
I feel sad that just when the season started n I got so so excited, now I have to wait two weeks
:'(

Chewing gum on the sidelines is enough to get Fat Sam perspiring enough to require a shower.

He probably sweats a lot

His sweat probably sweats a lot.

The whole thing stinks of Spuds…

Can’t believe the fat fool has left out Rashford, what a joke.

I think “fat fool” may be a little harsh on the incoming England manager at this stage of proceedings??
🙂

Yeah. Show some respect and wait until the fat fools utter lack of tactics is laid bare after his first game in charge of England.

I think it makes sense to leave jack and Ox out. Haven’t really played well and consistently enough to earn a call up. Might help focus their minds on doing well for Arsenal first.

What a shit squad.

Seriously, what a very average team, perhaps even a tad little below average

I think it depends if some of the players actually turn up, though they never seem to …

There’s at least 3 guys there who haven’t had a look in at their clubs yet get picked. Hart, Smalling and Sturridge.

When will an England manager pick on form?

Do you want to tell him about his use of ‘however’ as well?

At least this time it’s gonna be other teams getting their players injured rather than us! And Spain didn’t call Santi nor Bellerin either, awesome!

What has walcott done to deserve the punishment of having to shower with a naked walrus. Life’s so unfair to monsier walcott

Seems more like that should be punishment for underperforming

That’s pretty much guarantees the whole squad will be showering with the walrus already then. I mean… England!!!

Could be a strong motivator

These qualifiers are a total waste of time, they are just a distraction from the real football. I hate them they totally suck ass.

can’t imagine there’s much for viewership or ad revenue for Moldova vs Faroe Islands, if it even gets coverage outside their countries.

Yep that’d be the only thing that makes sense

It would make no difference if they did, England would still be playing in them.

Beware of Martin Skrtel Theo, for once I wouldn’t mind you being invisible on the pitch. Allow the mouth breather get his season ended by the half formed humanoid

Aye, i don’t think folk would mind too much if we just did away with it.
In fact i had a conversation earlier today about how in the age of technology we now have we should just do away with the whole concept of counties and boarders entirely…

Who gives a fuck about England and internationals,
Just hope no injuries

Good for Wilshere. No unnecessary injury potential, and being overlooked should help him to regain his focus if he ever wants Allerdyce to pick him.

Wait… Michial Antonio is English?? Where have I been

What is Tottenham Hotspur?

Wilshere could use some game time and help himself back in Arsenal line up. Remember last couple of games for National team he was named MOTM. When fit he is certainly Englands X factor

I dont get the Ox hate he looked pretty tidy in that Watford game. I have far better hopes of him fulfilling his promise than Theo feckin Walcott

I’m sorry but Sam Allardyce is a sad pathetic walrus and he is not good enough for England, his style of football is very negative, predictable and incredibly boring to watch. England need a manager who plays beautiful free flowing passing football. P.S. He is a cunt for leaving Jack out of the squad.

Disagree. Fat Sam is a better manager than most, imo. And did you see the shortlist? The rest were hopeless (Steve Bruce?!) No top manager would touch the England job.
Rather not risk Jack with England.