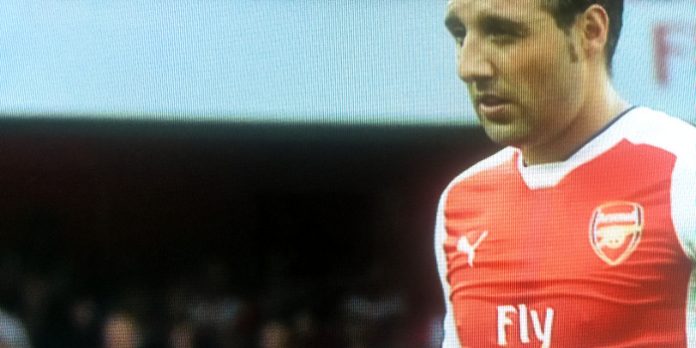 The first 20 minutes looked sluggish from an Arsenal perspective but the overall stats were pretty even: both teams tried 118 passes; pass accuracy was even with 98 completed passes for Arsenal and 102 for Southampton; Arsenal had 150 touches, Southampton had 154; and Southampton even had more turnovers with 6 to Arsenal’s 4.

But the problem arose in the final third. While Arsenal made the same number of overall passes, Southampton got more joy in the Arsenal final third with 37 passes compared to Arsenal’s 25. Southampton still struggled to capitalize on all of that possession until the referee gifted them a free kick on the edge of the box for a dive by Nathan Redmond. They were lucky on the goal with Cech awarded an Own Goal after getting a finger to the shot but only enough to push it off the bar. For those keeping track, Cech had his error rescinded in the Liverpool match.

Most of that dominance was down to Tadic and the Southampton right back, Soares, who combined for 18 of the 37 final third passes in that 20 minutes. Soares was Oxlade-Chamberlain’s marker and led all players in that period with 10 passes in the Arsenal final third. He only made one tackle in the game (total) and gave up a foul in that first 20 minutes.

Cazorla dominated that second period and pretty much everything from the 21st minute onward. He finished the match with 109 touches, tied with new center back Mustafi. He was also second on the team in passes with 74/80 (Mustafi was first with 85/96), was second in attacking third passes with 24/29 (Özil was first with 36/42), created the second most chances with 3 (Özil had 4), won more dribbles than any other player with 4/6, scored the winning goal after being iced out by every Southampton player on the pitch, and even had a clearance at the end of the match.

Cazorla also created Arsenal’s only (non-penalty) Big Chance of the game, that curling cross to Giroud for the header that flashed just wide. Have I ever told you my favorite number is 19?

Monreal was under aa great deal of pressure in the first 20 minutes, no thanks to his partner Ox’s lack of defensive support, but Monreal ended the match with the top defensive numbers of any player.

This is actually a common occurance: when you see a player with a lot of tackles, interceptions, clearances, and the like, the chances are that he was targeted by the opposition as a weak link. The trick then is to see how well he responded. In this case Monreal passed with A-Levels.

He led all players with 12 ball recoveries, led all Arsenal players with 3/4 tackles (Coquelin was 3/5), led Arsenal with 6 interceptions, and only committed the one foul. Which as we have discussed wasn’t actually a foul.

And still had enough to get forward! He was 3rd in final third passes (16/17), created a shot for his teammate, and won a corner with a well drilled shot in the second half.

If he keeps up with those types of performances Chelsea might want to buy him (back) for 5X what they just sold him for.

I think I agree with Lee Dixon and I’m not sure I like this new rule. Dixon pointed out that basically, the new interpretation gives attacking players every reason to pull shirts on defenders. The attacking player potentially gets an advantage if his shirt pulling is missed, and the worst punishment is a turnover. If the defender tries to get equal with the attacker, he could give up a penalty.

All stats from Opta

PSG are ripe for the picking! I hope we start Giroud against the French team with Sanchez on the left and maybe Walcott on the right.

he’s been working harder this year and creating turnovers. Although Iwobi looked decent when he came back.

I’d prefer Iwobi on the right

Yeah, Walcott. You know, that little English winger? Played a few games for us over the past decade?

Oh dear. No player ratings for this one?

Are you new here?

@7amkickoff you wouldn’t consider the shot Cazorla had blocked from 8 yards out a big chance?

An out of form Özil still made 4 chances! Nice..

I did too, even when pressed by several Arsenal players he never lost the ball. Him Tadic and Long were the difference, especially Long, ha!

Romeu Romeu wherefore art thou [Romeu]! It means ‘why are you named Romeu?’

I suspect there is a mistake in the article because it says both Nacho & Romeu led all players in ball recoveries. Very informative read. I find that I have only like bits and pieces of games this season.

Also says Cazorla and Romeu led all players in dribbles..

Did it look to anyone like Alexis and Santi were arguing a bit over who would take the penalty?

Arsenal could have lost.The fm doesn’t realise most if not all teams know how Wenger likes to play soccer.It s endless possession etcetc.
All these teams need to do is hit on the break.Against Mu and Mourino he will probably lose again though I hope he can scorea first win against the Portuguese.
Incidentally I saw rf grimacing when 2-1 down. He better know the days when MU can win 99.99% of the time is history.As many and I have reckoned he couldn’t dominate in the cl and that’s why he left.

We got very lucky, just like we did in the other game we won this term. Not trying to be negative, but we need to improve quickly.

And starting Ox and Theo on each side worked out almost exactly how you would have thought it would – i.e., it didn’t.

I think this is what makes Özil world class. I think by anybodies standards he didn’t play well today, and I clearly recall American commentators criticizing him a lot today, and then you see that he still completely dominates attacking third passes, with ridiculous accuracy, and has the most key passes.

Never listen to American commentators… …after the ManUre v. MancShitty match I was forced to sit through a 30 minute analysis of how ‘Claudio Bravo uses his feet’… …seriously? Pep doesn’t rate Hart, comes up with some polite rationale for getting rid of him and now we have American commentators dedicating 20 minutes of post-match analysis to a goal keeper who can control a ball with his feet and essentially credit the 2-1 win to that one facet of that one player’s game and it’s all because Pep is a genius. *rolls eyes* It’s complete bollocks. Have Pep take-over at… Read more »

Any stats for Lucas ?

That final second goal the winner v saints was a result but kosc goal surely a goal of the month.

@7amkickoff
Just so you know I definitely did notice Romeu…he was a monster for them. They aren’t going to miss wanayama if he plays like this. I was in awe at the number of attacks he broke up. He was right up there with Santi and King Kos for MOTM. Impressive from him…