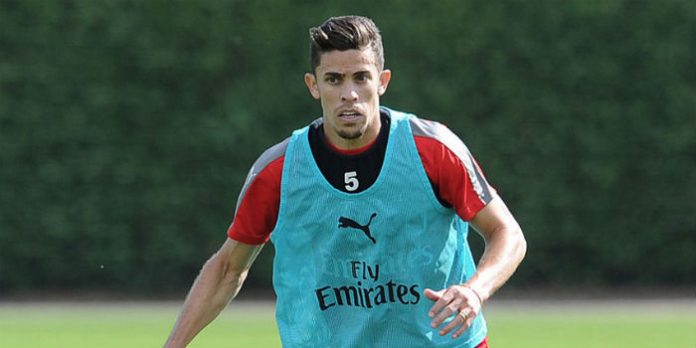 Gabriel has returned to first team training just 34 days after going down in a crumpled heap against Manchester City in pre-season.

The Brazilian centre-back suffered ankle ligament damage in a clash with Kelechi Iheanacho in the dying moments of the 3-2 win and was initially ruled out for up to two months.

Ahead of the Watford game, Arsene Wenger was optimistic that the 25-year-old might make a quicker return stating: “He’s progressing very well. He’s ahead of schedule. We said six to eight weeks and we think it could be six.”

It looks as though his recovery has been even swifter. It’s unlikely Gabriel will be part of Arsenal’s squad for the visit of Southampton on Saturday, but he should be available soon.

Laurent Koscielny, Rob Holding and new signing Shkodran Mustafi will hold the fort until then.

Partey back in full training ahead of Newcastle visit

I still have hope for him – fast, uncompromising, no looks to spoil.

He does indeed look like he fell backwards out the ugly tree hitting his face on the branches on the way down.

I bet that you gave thumbs up to yourself, Vin_Unleaded, you miserable excuse for a “fan”. Get lost and never find your way back.

Gabriel’s looks come up every now and then where some fans fail to realise that an Arsenal shirt makes even Shrek dashingly handsome. The shirt maketh the man and the man is both suave and dashing!

On the flip side a Chelsea shirt makes even Brad Pitt look awful. For example rumour has it that Costa was once the spitting image of HFB before he joined Chelsea. Some he was even a decent human being but I find that hard to believe.

Somehow I’m hoping holding doesn’t get dropped .I think if it ain’t broke don’t fix it. He’s been superb and I think he should keep playing while we slowly ease Mustafi in. Until he makes a mistake I think mustafi and Gabriel should be taking a Que behind

If Holding gets cut out of the picture as you are suggesting then what happens when we have either Koscielny or Mustafi out injured? A still-inexperienced Holding is what we get. We cannot concentrate only on playing our/your first choice team every week. The squad needs to be integrated so that we don’t have virtual strangers playing alongside eachother as soon as a first choice player gets injured.

A Match needs a team. A Season needs a squad.

It kind of makes sense why Chambers was put out on loan. Kudos to Gabby and the physio team for getting him back into the fold so quick.

Smashing news. Real competition now and if (hopefully a big one) Mustafi doesn’t take to it as quickly as we want we will have Gab there to hopefully step back in, not to mention how well Holding has done. Argument to be made to keep him in there for Southampton game.

Lots of people saying Holding could keep his place for Southampton, but I have to disagree. We have a hugely difficult game in Paris on Tuesday, so I’d much rather give Koscielny and Mustafi the 90 minutes together to prepare for that match than throw Mustafi in at the deep end and play an untested partnership in a game of that magnitude.

A Different George
Reply to  Sean

I don’t want to sound too negative, but I did not see Holding, yet, as a genuine option to be Koscielny’s regular partner. Holding does not–again, “yet”–play the ball the way Arsenal centre-halfs need to do. Too many of his passes are to his central defensive partner or to a retreating–not advancing–fullback or holding midfielder. He did a good job for us, especially in the last two matches, in purely defensive terms, but that’s just not enough. I think he has the makings of a future first-choice defender, brought along in the course of the next few seasons, which is… Read more »

@sean That is a very good point actually I hadn’t even considered it. Was just thinking along the lines of ‘If you play well you stay in the team regardless’ but probably more pragmatic to bed him in early. HOWEVER, Will one game make a huge difference? Genuine question!

Mustafi is going to be excellent, from the first minute, he is going to fit in immediately.

He will be ready for TGSTEL when we play Forest

Competition for places is such a quick healer

Waste of 35million. Could.have bought a 50million striker instead. Or 2 25 million ones

Duck off. Let me troll for once.

Or three Bendtners for sixpence each

Always good to have depth and to be able to rotate, even at central defense. Play Gabriel and Holding vs. low table league matches and cups, save Mustafi and Kos for Champions League and top 5.

This is the real world not fifa ultimate team..

Ah. One man is off the injury table

With our record,
*Shudders* Who do you think is next?

Not being pessimistic, it’s part and parcel of being a Gooner.

I think the critism of Gabriel has been unfair and a bit OTT.
He’s done ok.
To find consistancy you need a consistent run.
He’s certainly got all the raw ingredients to be a success.

His aggressiveness is great too. hopefully he tackles the shit out of diego costa the cunt and keeps him in his back pocket next time

This is the sign of the END OF DAYS!