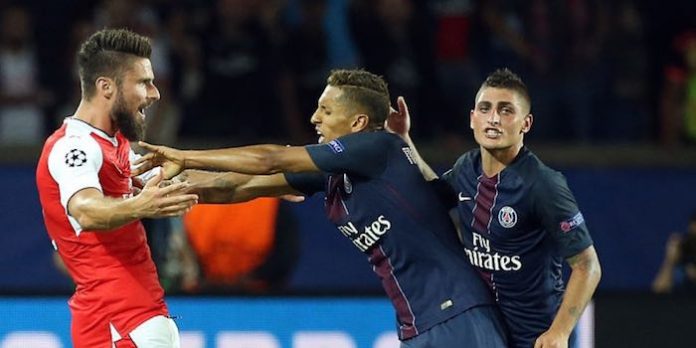 Olivier Giroud has hit out at Marco Veratti, saying he was surprised at the behaviour of the PSG midfielder which led to both players being sent off towards the end of Tuesday night’s 1-1 draw.

Giroud had picked up an earlier yellow card for dissent, and insisted he was trying to avoid anything that might get him in further trouble with referee Viktor Kassai.

However, Veratti and defender Marquinhos seemed to be instigators of an incident while the official’s back was turned, and his decision to issue second yellows was a frustration for the Arsenal striker.

“Being on a yellow card, I didn’t want to make waves,” he said.

“I obstructed Verratti, he threw himself to the ground. Marquinhos pushed me from behind and I don’t know how Verratti falls a second time.

“It escalated the situation. It’s frustrating, especially since I don’t know if the referee saw what happened. I was really surprised at his behaviour.

“I told him: ‘What are you doing?’, I think that the referee was tricked.”

Giroud will now miss the next Champions League tie against FC Basel unless Arsenal launch an appeal (if that’s even possible).

Giroud: Wenger did his best to make me happy

Giroud opens up on his decision to leave Arsenal

I’ve only ever seen yellow cards, or inaction come from Players dissent. The Referees do not listen.

Obviously I cant speak from experience, maybe the heat of the moment is too overpowering not to say anything. But I really wish we could just take any ‘wrong’ decisions on the chin.

The problem is that we get far more ‘wrong decisions’ than we do correct decisions, which makes continually turning the other cheek rather difficult.

We should appeal. That decision was simply ludicrous.

I hit out at you, you egotistical id1ot. You should shut your mouth and show respect to the ref, stop whining and focus on the game and how to help the team. He does not seem to learn or grow with time – he did the same thing against Dinamo Zagreb last year. I thought that he should’ve started the match yesterday, but seeing how he acted, we would have a 10 man squad for more than half a match according to what he showed. Guy has an ego like Ronaldo, with not a half of his talent and ability,… Read more »

Nice. You’d have run the team well. Well into obscurity.

Yeah, in my experience it really mellows players freezing them out of the team for three months. He’s been a bit silly but in his defence Veratti has a face that begs to be slapped. I think we need a certain amount of perspective here, people are so quick to assassinate players characters. Rooney gets almost applauded every time he gets a booking. But it’s called desire when Rooney does it.

The Giroud hate is strong in this one…

Should have put money on him to see red after he stormed on and seemed riled by the boos of the home fans. Even if the red card decision did make as much sense as Owen Hargreaves.

Owen Hargreaves is on E. Everything is the best ever.
Aurier best ever right back performance
Ospina best ever go performance.
Best pass ever
Fuck off

Well at the moment he seems to be third choice striker so let’s not lose too much sleep over it. Not only is Giroud’s disciplinary record poor, it’s always for handbags and pettiness. If you’re gunna get sent off, go through someone fella!

Giroud didn’t fall for Veratti’s cuntery, the naive referee did though.

This “can’t appeal a second day yellow” bullshit has got to go. Giroud did nothing to earn a second yellow and the subsequent red.

Sometimes the ref is just wrong. After playing organized football for over thirty years I can’t count on one hand many times the wrong guy was sent off. It happens. Marriner/Chelsky/Gibbs/Ox

I think I’m wrong but just in case, was the ref not wrong to show Giroud just the RED card? I thought he had to show the second yellow and then red. Apologies if this is nonsense

The referee did in fact show Giroud the second yellow, followed by the red.

Doesn’t change the facts that (a) Giroud has only himself to blame for being on a yellow in the first place, and (b) those cunts Verratti and Marquinhos engineered the whole incident with their shameful play acting.

I think you can only appeal direct reds. In this case it was a second yellow I believe, so no chance of it being overruled.

The second yellow was a bit harsh, but he was looking for trouble since the moment he got on. Kept talking to the ref (even before he actually got booked for it) and was making unnecessary, cynical fouls and pushess. He doesn’t have anyone to blame but himself.

I thought the same.

He seemed to be asking for the yellow when he came on, arguing with the ref for nothing. I thought maybe he was frustrated, not to have started the game.

The second red card was ridiculous by the ref!

in arseblog we trust

I am probably wrong as I am not a football manager, but maybe AW does not select Giroud for us to play differently up front.
We might struggle atm as we are not used anymore to have more mobility up front and the only way to change routine is enforcing it game by game and hope it will be fast to gel.
But then it is insanely frustrating to see us play as badly as yesterday first half.

I can’t believe how much an a**** Verrati is! Scandalous!

Not overly fussed by this.

My bigger frustration is at Coquelin’s yellow…did anyone see that?

How the ref booked him for that challenge is a joke…he didn’t even touch the other player.

Agreed. That was far more frustrating. Not the best night for the ref.

Giroud looks innocent enough but he tends to get into these situations far to often by talking and waving his arms. The first yellow was for him being a dick for the second time and the ref got fed up. Don´t know if he said anything to Veratti but I wouldn´t put it past him.

He gets a rough treatment from defenders but he gives as good as he gets so nedds to grow up and stop whining at every decision that goes against him. Seems like a bit of a brat to me.

The coverage/camerawork (in the States) wasn’t great for either call. I had to guess at the first yellow, and had no idea what happened on the 2nd. Nonetheless, the first was dumb, the second seems nonsensical.

Undeserved second yellow, but I thought it looked like he had one of those matched where he would be sent off. Was not surprised

Shit happens. Good opportunity for Lucas to make his cl-debut. Basel at home then Ludogorets home and away. The qualification really should be done and dusted before november. Last nights result was a great gift, let’s make the most of it.

but does Veratti wear Manscara?

It’s eyeliner more like. He has the same make up artist as Lamela ?

He didn’t deserve to be sent off, simple as that. Yes he was naive getting himself into a situation to be sent off in the first place but that has no bearing on this. The ref made an instinctive call and got it very wrong, not placing any blame on Giroud for this one. Clearly the first incident was a clumsy coming together, then that other cunt came in and pushed Giroud into the his own team mate and got annoyed at Giroud for it, if anything he should have been sent off.

I can understand his frustrations, especially the first yellow. Jeez, it was series of nothing fouls & yet he got called badly everytime by the referee. Does he not suppose to fight for the ball? He did absolutely nothing wrong in those circumstances.

Nothing wrong except for mouthing off to the referee and earning himself a stupid first yellow.

He is expected to take fouls, opposition climbing all over and pulling him about, and keep quiet when he is penalised for doing far less. Not one person mentioned the opposition fouling Giroud in full view of the ref and the TV cameras in the penalty area as Alexis scored. Absolutely disgraceful

So Giroud blocks Veratti with his arm, Veratti falls down and trips Giroud up. All a bit handbags really. I’d say that Marquinho is the one who really deserved a card as he pushes Giroud from behind and in doing so knocks Veratti over again. It’s a marvellous piece of slapstick. I can understand a ref wanting to cut out any gamesmanship, diving or nonsense. Maybe they’ve been instructed to take a hard stance, but this could have been sorted out with a few words. “You’re grown men, stop embarrassing yourselves or I’ll send you off” Still the positive is… Read more »

You beautiful idiot, the talking back to the ref got him offside and he carded you the second time to placate the home crowd. Why are the pretty ones always the dumbest?

I don’t think a yellow card can be appealed wither so its all the one really! 🙁

I was in the stadium, and the Giroud block was pretty obvious (and pretty useless). Deserved a yellow.
The mess that followed was a bit pathetic but useful to us at this stage (we could get knocked out any second). Anyway, a yellow for both seems fair.

I’ll probably get downvoted to hades itself, but I thought Giroud initiated the contact. The clip you linked to doesnt start early enough to be definitive. I was watching and I saw OG, after the ball was away, give an obvious shoulder to Veratti. I haven’t rewatched, and I suppose I could be wrong, but I remember immediately thinking “Shit, that was stupid, Ollie. You’re on a yellow!”

Did Veratti fake falling over and grab OG after he went to the ground? Absolutely.

But should Giroud not have been such a dumbass anyway? Absolutely.

It looks like when Marquinho pushed OG the first time, Veratti drags with his left leg on purpose to force contact.

I think his wizard beard seems to be laughing at the ref and the ref was like ‘i am having none of this shit anymore. you’ve got to go’.

Sooooo late in the match.

Ref should have applied a bit of common sense. Granted players were being silly, so just calm it down and finish the match without the cards.

Italians, the wind blows and they fall down.

You should know that being French Giroud. Look what happn to Zizou, He poked out Materrazi’s eyes with a hair from his head (The only one.