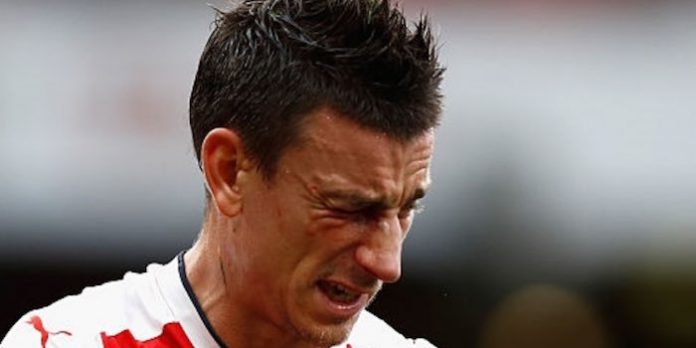 Sky are reporting that Laurent Koscielny took part in training today, hopefully a sign that the eye injury he suffered has recovered enough for him to make the trip to Paris to face PSG.

The 31 year was booted in the face by a Southampton defender in the closing stages of Saturday’s 2-1, leading to swelling that concerned Arsene Wenger at the time.

If he is in full training today though, chances are he’ll be ok to make the trip at least. Should he not make it, Wenger will have to decide between Gabriel – just back from his pre-season injury – or new boy Rob Holding who played in the first three games of the season.

The Arsenal manager will provide a full fitness update later on at his pre-game press conference.

Mein Bergkampf
Reply to  A Gorilla

Titus
Reply to  A Gorilla

I only hope he won’t be included in the team just to be subbed a few minutes later. Otherwise,i wish a speedy recovery to the big man.

I love our one-eyed monster!

We need Kos the Boss! May he make the trip as his experience will be crucial in this game vs PSG. #COYG

I can see the headlines now:
One eyed koscielny scoring a 45 yard bicycle kick to win arsenal the champions league

Always good to be optimistic ?

Good to see him focused on the game. Just hope the medics keep a good eye on him.

You mean keep a good eye on the bad eye?

Well, they should keep him under the microscope. He obviously has his sights set on playing.

He is our best defender and he needs to play the game of this magnitude .
Hope everything is alright and kosc scores the winner this time with his trademark rabona.
A man can dream…

I nearly shed a manly tear when Koscielny got back on the pitch with his botched up eye to see the game through. Absolute fucking warrior.

Also abit off-topic, but it only occurred to me today that Wenger has tried out 4 entirely different midfield combinations for our last 4 games (Xhaka/Elneny, Coq/Xhaka, Santi/Xhaka, Coq/Santi) – albeit it’s a bit risky but if doing that helps narrow down the strengths/weaknesses of our potential midfield partnerships I think it’ll really pay off as the season goes on.

Wenger said ” if he doesn’t make it, he will decide between Gabriel and Holding”
At long fucking last ……some depth in the squad.

Koss the boss will play!!!

I for one am glad that Koscielny will be able to spare both eyes to look after our defence.

The things i’d give to make this man 4-5 years younger, just imagine the state of our defence without him. Let’s hope holding learns everything he can from per and kos and takes over them in good time.

Koscielny could boss any game blindfolded, So one good eye should be more than enough. 😉

If he played for Man U we could say that in the land of the Blind, the one eyed man is king…..but he doesn’t play for Man U (fortunately) so we can’t say that…..but just saying….

Am I the only one that feels more comfortable with Holding playing over Gabriel?

No, I don’t think you are

Why do you say that, is Wenger going to play Holding instead of Mustafi?

Oh sorry just noticed now the paragraph under the pic

Love how he doesn’t drop focus and lunges to try and win the ball before the clearance, after taking a full on kick to the face. Absolute legend.

How can you be holding and playing over Gabriel at the same time…..

All this negativity about Ox is annoying frankly. Granted he still has much to prove but he was energetic and useful on the ball pushing us forward. he has the technical ability to hold the ball and beat 2 players either with pace or in the dribble which he did on a number of ocassions. Plus the first goal for us came from his run chasing down the ball and sucking in the foul. In fact Walcott who got a higher rating (presumably for two headed attempts off target) actually was the player on the team with least touches. Ox… Read more »