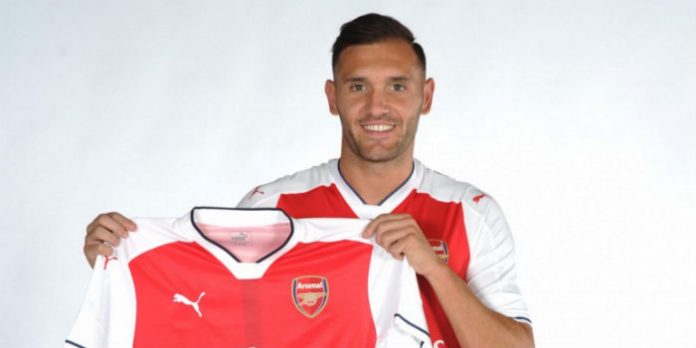 Lucas Perez will wear the number [9] shirt for Arsenal having completed his move from Deportivo La Coruna this week.

It’s a number that many Arsenal fans believe to be cursed as the recent incumbents have been less than successful sporting it on the back of their shirt.

Famous names like Julio Baptista, Francis Jeffers, and Park Chu-young didn’t do well because, you know, they were kinda rubbish. Not because of an evil shirt.

Eduardo da Silva’s Arsenal career was ruined by a horrible challenge from Martin Taylor, not three 3s added together. And Lukas Podolski did ok in it.

The number 9 has been vacant since the departure of the social media guru German, and whether the new boy does well will be down to his footballing ability and application.

The striker had worn number 7 at his old club, but that was taken by Alexis who inherited it this summer from Tomas Rosicky. As was the case at Deportivo he’ll be known just as ‘Lucas’.

I knew it would be 9 just made sense. I personally think he should be starting ahead of giroud and giroud would be our plan B I think he’s style will suit arsenal very well.

That depends on the oposition we play and the form of the player, plus they can play both, lucas can compliment giroud. And don’t get me wrong i want lucas to be a great player for us but when Giroud is on form he is irreplecable as long as we don’t have an auguero in our team, becasue giroud when on form he is not only scorring he is dictateing the attack whith his hold up headers, inviting peiple in attac he does everything plus defending corners briliantly.

Perez creates more than Giroud and is probably a better finisher than him. If he fits in well, he’s def relegating Giroud to the bench.

Giroud is just not the striker you have as your main starting striker if you’re trying to win the league. His shots and chance to goal ratio is just terrible in a team like arsenal 12 15 16 goals a season is just plain average and not good enough.

And Perez is Lionel ducking Messi

Alright, Thierry, we get it.

“When Giroud is on form is is irreplaceable”

I see that, with the good transfer window, general optimism has now swung again to bizarre exaggerations again.

Dude do you read the whole comment, he is irreplaceable as long as you don’t have a world class striker like aguero. When he is not in form or have a drought wenger drooped him for walcott last year, but when is on full form he is one of the first name on starting eleven.

The fact we are simply having this debate is a blessing. We have options ! Doesn’t matter who’s first choice, we are finally talking about real tactical options… and it’s fuckin excellent.

But he seems a counter-attacking player. These days, we are more a scheming team than the days of Henry, Pires, Vieira, etc.

Rather have Giroud I reckon he is better than most of our English players by some distance.

Will he be our main or secondary striker ?

Wenger will ‘do a Bendtner’ and play him on the wing probably.

When Skies Are Grey

Guessing 20 for Mustafi? Only decent number available for him!

Sam
Reply to  When Skies Are Grey

My thought as well. Ozil should be given the number 10 shirt.

We should learn from the days of Gallas. Never return to the times of CBs wearing 10.

But… Number 9 is cursed. No, noo! NOOOOOOOOO!

Like Poldi and Eduardo before him….Wenger will play Perez on the wing once Walcott inevitably begins to fade.
Giroud up top with Alexis and Perez doing damage from wide areas.

Or he could just bring in Iwobi.

And I thought number 2 was cursed

I hope the new Lucas has the old Lukas’s emoji skills down. That’s really what’s expected from a No. 9 these days.

Alexis has obviously been our striker so he could even remain in that position and leave giroud and perez fighting for the secondary role….. that said without signing a wide player and letting joel and serge go sanchez will probably shift out left again….. Or lucas may play out wide…..

No curse in the no 9 shirt. Lucas will prove this!

Let hope the gamble by Wenger pays off this time around!

Wonder if Ozil will ask for the number 10. He clearly likes to wear it. But it might be harsh on Jack.

Don’t think jack will mind too much this season.

If so, will he hand it back to Jack on his return? Awkward

Sinbad So Good
Reply to  @arseferret

I think Ozil’s made the 11 his own. I know he just changed his German squad number, but don’t players like continuity at all?

What were we thinking giving Park-Chu-Yong number 9.
It also goes to show that we haven’t had good strikers in recent years

That was a strange one wasn’t it. I think it was one of the signings forced on Wenger and probably the last!

See what I did there?

It’s all humour, I know I know … but the Podolski thing still rankles. How the boss, normally so good at footballing matters (if not transfers), couldn’t get the best out of such a clinical finisher is beyond me.

Well I guess he did not like to work that hard. He did not have a good season in Italy too.
Can’t help when a footballer does not want to run a bit.

Well Barcelona have the tedious MSN but now we have Perez we can safely navigate our way through the season with GPS (Giroud, Perez & Sanchez)!!!

or AOL to go with the MSN theme!

Giroud is good sometimes, I hope Perez will be good all the time.

No one is good all the time.

Once again, amazed by how much blog space can be taken up by just an update on a player’s shirt number. #amazeballs #AMZ #OOFT

For what I ve seen of Lucas last season in Spain he is perfectly capable of keeping Giroud on the bench. Hope so as that would mean many goals!

The bench will be interesting

Giroud is not a problem. he is an enabler. Even when not scoring, he brings in others. I thin the issue has been confused by the press deliberately. The issue is due to the fact neither Welbeck nor Walcott have been scoring when fit and they have also not been fit for a spate. What Wenger hopes he is getting from Perez is something different to giroud in both pace and technical ability in tight areas where he may not be as strong physically or as good aerially. BUT he wants both players to be enablers and be able to… Read more »

As far as the timing is concern with regard signings, I mentioned early in the window that the Euros will probably delay things. We see teams signing players at 47m in mid summer at high stakes. Should these players not work out, they may end up stuck bc of wages and the team will then have to expend on loans taking up the high wages (See City with 4 major players loaned) You look at some of the prices paid (sissoko for 30m) and you should (if you were sane) wonder what the media are going on about us panic… Read more »

£35m for Mustafi is definately excessive but I guess that’s what happens when you wait so long that you need to sign someone just before the window closes.

What was our previous most expensive defender signing, I’m assuming Chambers @16m.

Totally agree ,average English players with half the ability and a smug attitude cost twice as much as ,say a Croatian unknown with twice the ability and the motivation to succeed along with it.
Unless… you have someone who has the savvy to identify talent and desire to succeed you’re screwed .That is unless you have a multi billionaire mate who allows you to make mistakes and lousy judgment calls forever

It’s simple really guys…..none of us really have a clue how this is going to play out.
There’s certainly an excitement which is probably based more on hope…however there is an inbuilt fear in us arsenal fans that casts a doubt in our minds before he’s even kicked a ball.

Either way
..time will pass and if not perez…we will have new things to deal with good or bad come may.

Let’s just try and enjoy being fans a little more….we invest far too much to constantly have the hump.

I liked the last Lukas who wore the number, I wish to like this Lucas more