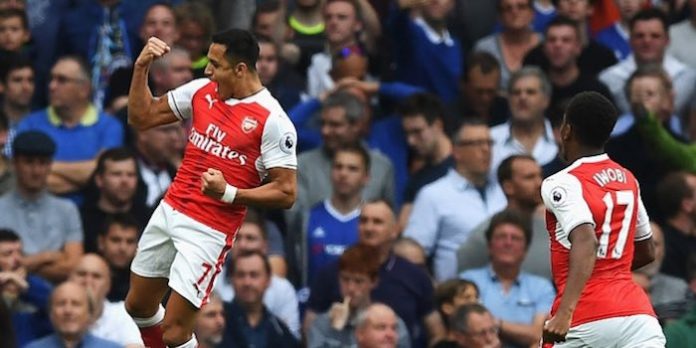 Ok, maybe it wasn’t on the whistle but who cares? We beat Chelsea 3-0 and here are the thoughts of Gunnerblog as he missed the opening two goals!

Video: Chelsea 2-2 Arsenal ‘On the whistle’

The good news is that the third goal was by far the best. Wengerball supreme a la moutarde.

I disagree. The second goal was the best.

Pundits blabbered on about all our goals being on the counter.

We worked the ball one touch through traffic to score the second. They stood like wax figures because our passing was so pinpoint and so quick.

The system Wenger is employing also confused them with Walcott moving in field to add a second body into the box. They did not know who should track him with Calamity Cahill and Sideshow Bob tied up in knots.

It was a surgical move.

Don’t get me wrong, I like the third one too on the counter. Ozil spun every pundits favorite ‘never do wrong’ DM Kante.

In fact Ozil was having an outstanding day, symptomatic of when the team plays well. He put in a no look pass and that volley for the goal was every bit with intent.

But the heavy pressing by Alexis (and Coquelin) simply made them uncomfortable and led to the first goal with Alexis preying on Cahill.

Meanwhile our panic buy Mustafi was solid through the game.

I just don;t think many understand what Arsene is doing. Many simply think they know better.

I put my hands up. I was with others in thinking Alexis would struggle up top.

He’s scored 47 in 100 appearances for starters which is one less than Henry in same number of games.

But he hasn’t stopped when pushed top.

We lose the height, wall passes and power but we play a different approach with Alexis as false 9.

I think key to it as well is Walcott has been afforded space to pinch into the middle so effectively we have two players the opponents have to keep an eye on and they simply don’t know how to handle us.

Part of the freedom in pushing Theo in field has been Bellerin’s better ability to bomb forward because Mustafi (again bought for a number of reasons) is comfortable closing out the right side being played there before.

This gives us the added weapon on the right and plenty of speed from Walcott to Bellerin to Mustafi. They are also working for each other on that flank with Theo putting in a wrokman’s shift, Bellerin able to track back with his pace and Mustafi taking up good positioning to cover them when they go forward.

Again most people are simply clueless with transfer window.

They listen and bleat on the sweet nothings from the media.

Mustafi a panic buy they say. for 35m. Wrong man for the job.

Well I think he has been fitting in rather well.

There’s also a soft human side to Wenger’s selection of Mustafi.

When Ozil scored his goal, he got a friendly pinched of the ear from his compatriot German.

Contrast this with the heralded buy of the window in David Luiz, the clown who never was reliable for them.

The press bigged up the sale saying 34m on final day was not a panic buy but a coup since he was sold for 40+M neglecting the fact they bought him for some ridiculous price in the first place.

Then you have Marcos Alonso who cost them 23m on final day. Not panic buy? We paid 17m for Perez who didn’t make the pitch despite scoring 17 goals in La Liga.

So why did we not see Lucas or Ox (who has the usual numpties on his back). Instead we saw Gibbs.

Wenger doesn’t do tactics I heard Zola say on BT Sports, he doesn’t like to tweak.

Alonso was putting in crosses from our left and Gibbs was brought in to keep him in check. As soon as GIbbs came on, Alonso shifted to the right with equal in effect. But we saw the merit of the gaffer’s decision late on with a ball that when through our box only for Gibbsy to clear for us when everyone else missed it.

Give the gaffer some credit. He has been 20 years in the business has never dropped below 4th as a minimum, won a number of doubles, the most FA cups for a a manager and gone a year undefeated.

He is one of the best in market with ‘panic buys’ and if he doesn’t do tactics, he still outfoxed a number of more “tactical astute” managers in his time from Klopp to Conte (last season against City and United)

Credit where its due.

Only James would book a flight that landed an hour before kick-off and then try to get through NYC traffic before the match started!

Great to hear the shout out for Gibbs. Thought he came on and showed real fire, contributing defensive cover and solid interplay on some attacking moves. Squad depth is a good thing.

I love that third goal

WOOOOOOP WOOOOOOP THAT’S WHAT I’M TALKING ABOUT. Holy shit what a game. Not 1 bad game amongst the Arsenal players. Walcott on the wing terrifying their defence with his pace, Sanchez looking menacing up front. Ozil exposing Kante for the fraud he is. King Koscielny and Mustafi had that good looking bastard Costa in their pockets all game [he was nearly in tears] ha ha ha. strength in depth. Clean sheet. Just what we Gooners needed against one of the bigger teams. Best midfield in the Premier league. Oh yeah what about that tackle from Bellerin??? AWESOME-COYG!!!!!!!!!!