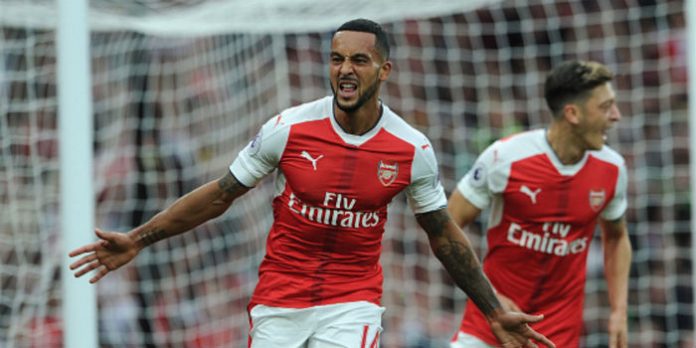 Theo Walcott says Arsenal’s hard work behind the scenes paid off against Chelsea as Arsene Wenger’s men ran riot in the first half to secure a 3-0 win at the Emirates.

The England international doubled the Gunners lead on 14 minutes with a strike from close range in between goals from Alexis Sanchez and Mesut Ozil.

Reflecting on the result and performance, Walcott highlighted the importance of the squad’s collective hard work.

“We worked really hard, we worked hard in the week and we obviously know what’s happened in the past. But the past is the past, it’s all about now and this team is bright and young and has got a lot more experience in these games now.

“People would expect us to go on and get four or five but that’s not the case. You saw on the kick-off this morning, it’s always easy to actually get 11 men behind the ball and they’ve got to come for us then. And then it plays into our hands. But the guys did well today, really well done.”

The manner in which the Gunners raced to a three-goal advantage was reminiscent of a similar showing against Manchester United last season when Wenger’s men bagged three goals in the opening 20 minutes.

“When we played Man United at home last year it was fantastic, but I think it’s been quietly coming actually, to be honest with you,” he added.

“We’ve been quietly doing our business and like I said, everyone is just working for each other now. We’ve got some great individuals but when you get those individual stats you play as a team as well, everyone is focused and you could see that the 11 men wanted to win this more than the other team today and thankfully we did that.”

Having been party to a few false dawns in the past, Walcott cautioned against getting carried away by the result.

“You know what, we’ve been here before. I’ve had so much experience in the years, but like I say, we’re not doing ourselves any harm. We just want to keep on doing our business, that’s all we want to do.

“We want to try and improve and see what the negatives were in the game, I’m sure there’ll be a few. We always wanted to keep a clean sheet, if we keep clean sheets we’re going to win games because we can score goals up front, so you’ve got to give credit to everyone today.”

Theo Walcott: I fell out of love with football at Arsenal

I'm only making plans for Nigel

Theo was much improved yesterday, but that really is a load of jibberish!

mannyg
Reply to  I'm only making plans for Nigel

Just words. It’s a great result which gives me hope for he season….at last. But as he says, we have been here before and need to do it again

Wizardry
Reply to  I'm only making plans for Nigel

You need to lighten up my friend. Give credit where credit’s due. Not only has he been good, but his presence has made Sanchez more effective in the striker role.

spot on, it’s been touched upon before how much him and Sanchez seem to compliment each other. It’s no coincidence that the few bright spots in his season last year were when Sanchez was playing.

Georgeycharles
Reply to  I'm only making plans for Nigel

Made a lot of sense to me – a measured and sensible response to the questions he was asked.

Theo’s performances this season have thus far been very good. Watching him track back and get stuck in defensively has been a pleasant surprise. Keep it up.

Not trying to be overly critical, but he is always a different animal during contract year

He’s already tied down to a long-term contract… Only need Ozil and Sanchez to sign da ting. By the looks of they already might have (Sanchez thumping the Cannon after scoring against Hull and Ozil yesterday).

His contract runs until the of Summer 2019.

I have been getting online every few hours for a *by the numbers* article. Please Mr. Good Blogs.

What a day to be alive #COYG

And can all the fans just keep supporting these lads no matter what happen? Seriously no one wants to lose but when it happens it means a slip in the way of success. We should learn from experience that no player is a total waste for instance Montreal, Coq, Rambo etc all of these players have their moral dented by the fans at some point of their career but thank God we did not have a clueless and a cunt (The Mourni Man) as a manager but rather a mam who believes in every player that have passed through his… Read more »

Word. Some of the whinging at the Emirates is just embarrassing… occasionally passes go astray, so what? Look what happens when it clicks!

So far Theo has had a really good start to the season. Really hope he consistently carries on and fulfills his potential. Was at the Emirates yesterday and he was truly phenomenal, attacking wise and defensively. Took on players successfully, decision making was excellent and kept on tracking back making good contributions. Loving Walcott and looks like a completely different player reminiscent of the 12/13 but better. COYG!!!!

As an attacking force he’s back to his best (maybe better) but this new defensive dimension is taking him above and beyond. Apart from his new-found, incredible work-rate and tackling ability (“did he just outmuscle Matic??”) what I’m really enjoying is his involvement in the build up play. He’s no longer satisfied to just be on the end of things, he now wants to come inside and create for his teammates as well and that’s a big reason why his partnership with Bellerin has improved so dramatically. Intelligent passing and movement, tracking back and winning tackles and of course scoring… Read more »

Theo was an absolute fucking monster yesterday. 100% sure they chose him for the drug testing. That’s how good he was.

What did they test on him? Want some

It has to be an improved consistency patch that they’re testing.

Theo has really knuckled down and is working much harder so credit to him. I did particularly enjoy him saying he was “quietly confident” in a MOTD interview broadcast to millions…!

Theo’s conferences makes him come off as a really smart guy with a stable mind. Speaks like a gentleman. In my opinion He should look forward to coaching some day.

Tell you what, seriously impressed with Walcott so far this term, and more than willing to eat the humble pie he’s serving me after I criticised him last year

He was a mess last year a messi this year.. I think he’s eaten the humble pie and realised that he wasn’t good enough for any team in the premier league let alone Arsenal.. He’s knuckled down and that is a terrifying prospect for a defence… Theo Walcott with a clue!!

I criticised Wenger for shipping out Campbell and gnabry but of this is the taste of THAT humble pie, I’ll scoff that shit all season

I think alexi’s arrival has something to do with instilling the fighting spirit in the team. Recently you can see that trait in the Ox too.

With the energy City put in every match, I hope they will lose steam after the brutal winter weeks in the PL. I think we have more experience in managing such a crucial period.

we’re playing great! problem is Man City look really bloody good under Pep. We need to win both games against Citeh I think to have a shot at the league.

How bad did Kante look yesterday? We just ran right around him like he wasn’t there yesterday 🙂

I’m hoping they might falter next month when they face Spurs, Everton, Barca and Man u. All of their games at the start of the season have been easy. December is bad for them too.

Yeah the way Ozil left him for dead was just weird. Not the initial turn, that’s just Ozil being Ozil. But after that Kante didn’t even TRY to get back, he just let Ozil run off into a 2 on 2 with the Keystone Cops. Bizarre.

Like Liverpoo! they play at a very high tempo, so they will be effected by fatigue and Injures, and their squad isn’t that deep.

If I could ask him one question it would be “how the fuck did you keep that ball in play on the touch line before sprinting down the line and leaving their left-back for dead?” Everything else was pretty much perfect from him in terms of attitude, so if he’s now adding some of Ozil’s wonder touch to his game I think he may actually live up to some of those high hopes we’ve all got for him. COYG

I’m one of the Walcott detractors. I still think he is guilty of too many loose touches and control issues. BUT I have to admit he is starting to prove me wrong with his industry. He has a more mature and serious end to him (as perceptable by his interview after the match) And he was indefatigable in both attack and defense yesterday. Wenger has Mustafi (cofortable covering right side) which affords Bellerin license to better go forward. Walcott however has also been dilligent tracking back. BOTH have the speed to recover from poor positions. The other thing is Walcott… Read more »

I guess the Theo bashers and the Wenger Out brigade took the wknd off to go camping or something.
Theo was absolutely gassed in his BT post match iv yesterday, and why not as he covered alot of ground and rarely left Bellerin exposed on his flank. More like that Theo and you’ll be starting for England again!