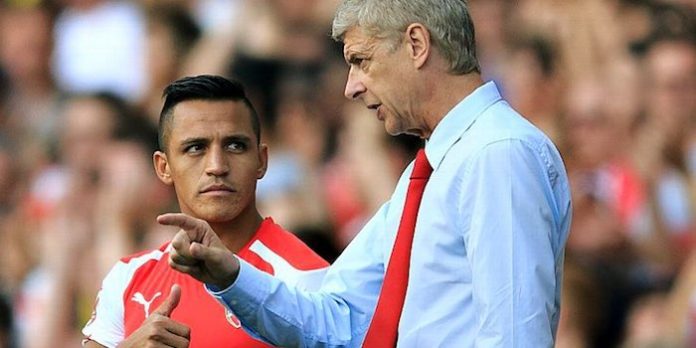 After Alexis Sanchez spoke about how he viewed his qualities on the same level as Lionel Messi and Cristiano Ronaldo, Arsene Wenger has backed the Chilean’s ambition and says it’s down to the player to prove it.

Speaking during the week, Sanchez said, “I do not feel inferior to anybody. I liken [my qualities] to Messi and Ronaldo. I have the same abilities as them.”

And when it was put to him at today’s press conference, the Arsenal manager said that was the kind of attitude he likes to see.

“It is good to have that kind of ambition to be the best,” he said. “He has the potential and the quality, but it is just up to him to show that. I hope Alexis can do that.”

“That’s what you want him to do, but Messi and Ronaldo have done that for years and the consistency of their performances speaks for them.

“Alexis is ambitious and is the sort of guy that wants to win every game.”

If he could produce a season that came anywhere close to what those two do on a regular basis for their clubs, that would be very welcome indeed.

A squad of ambitious men, with winners in it. Could do well…

We may not have that world class striker but Sanchez certainly does have the potential to get 20-30 goals in the premier league. He just needs to stay higher up the pitch. With the addition of Xhaka and the return of Cazorla hopefully he will not feel the need to get involved in the build up play as much as he was doing last season.

Has the ability…. Has the right mindset…. And now seems to have the right team around him… So Yeah! GO ALEXIS!

Oooookay, here come the thumbs down but ultimately true comment: Alexis does not have the ability of Messi and Ronaldo. Everyone knows it, and pretending otherwise does not make it any less true. So go ahead, hit me with that down vote, but you know it’s true just as everybody does. The proof is in the pudding. I love the ambition, and if it propels him to greater heights, then more power to him, but I think inviting such comparisons just feeds the trolls.

Alexis has goals in him. . .lots of them. If He, Giroud, Walcott, Perez and others mix it up well, the league is ours. Alexis was out due to injury for some time which hampered his goal chart last season. Giroud didn’t score for (was that 12 or 15) straight games, yet he got 16 in the league, that’s a lot considering. City, United and Chelsea don’t have more goals in them than our team do, it’s just a matter of character and defending well together.

Funny how people bang on about Giroud not scoring for x number of games, but conveniently forget that Jamie “Walks On Water” Vardy went 19 league matches in the middle of last season with only one goal to his name. Folks, EVERY striker in the world goes through dry patches. Despite the long drought, Giroud still tied for seventh top scorer in the league last season, and don’t forget he missed a considerable time injured.

This sounds like indirect context haggling on both sides. Alexis: “I want my 200k contract.” Wenger: “Look at your stat line last year; Let’s make it contingent on the ballon d’or…”

Is anyone else having problems trying to launch the Arsecast??