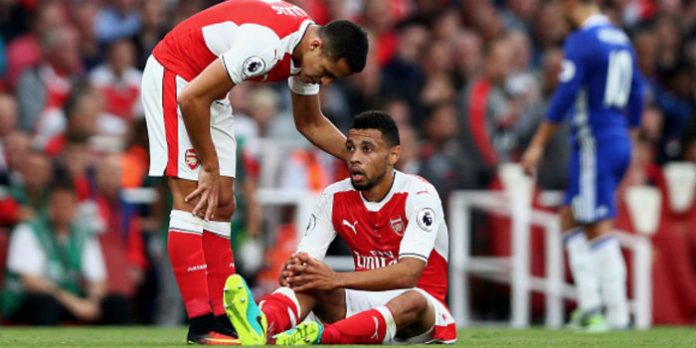 Arsene Wenger admits he’s worried that Francis Coquelin left the Emirates in a brace but says Arsenal will have to wait 48 hours before the full extent of the player’s knee injury is known.

The Frenchman cut an energetic presence in the centre of the park as the Gunners raced to a two goal lead but was substituted on the half hour mark after twisting his knee blocking a shot by N’Kolo Kante.

Speaking after the game the boss confirmed that Coquelin’s injury has been sustained in the same place as a problem picked up last season.

“He has a knee injury at the same place he had last year at West Brom,” the boss told press after the game.

“That’s the negative of the day. We don’t know if the damage is as big, at the moment, we have to wait for 48 hours. But he left the stadium in a brace and I’m a bit worried for that.”

Last season’s knee injury saw Coquelin ruled out for three months. Let’s hope we get some good news because that would be a real blow. In the meantime, Granit Xhaka could fill the void on Wednesday against his old club Basel, while Mohamed Elneny is another option in the holding midfield role.

I always hear people say Bellerin has a bit of Coq-knee in him, maybe he can be of some help.

We ripped apart their back and pummelled their cunte after such violent shagging its little surprise that we broke our coq.

Lets hope getting him off immediately will help with the recovery.

Shad is a fitness coach/sports scientist not an orthopedic surgeon or physio.

From 6 midfielders to 3 in a month.

No disrespect intended, but I prefer the Xhaka/Elneny replacement options over Flarteta. Though, as always, the prof will be in what’s delivered in his absence.

I hope Xhaka is made of sturdier things

Yes, I hope his knees are made of liquid metal, unlike Francis Coquelins old fashioned bone and cartilage crap

If feel really badly for Coquelin as he is such a brave and incredibly underrated player that every game gives the team his body, heart and soul. Despite the unfair criticism he has been receiving recently in large part because folks want Xhaka to start, Le Coq has been playing his best and most complete football in his career. I am confident Xhaka will be flourish and that Elneny also provides solid, solid cover, but Coq is going to be missed because of his mobility to cover so much ground defensively, his uncanny capacity to break up play in both… Read more »

Don’t feel too bad though because he has Le Prof’s backing and that’s worth more than that of some (I emphasise “some”) fickle fans.

Isn’t it beautiful… We lose a major player… No problem we have two other guys that can come in and do that job.
Life is good at the moment being a gooner!

True, but I’m sure we’re all just a bit concerned that next game we’ll lose another, and before we know it we’re in “that” situation again. We have a big squad, but we all know we’ll need it, based on recent history.

Regarded as just a midfield enforcer, he has been quietly developing into a very decent all round player.
We have good alternatives, but I hope for us, and him it is nothing long term.

I’m sure we can cope. I wish him a quick recovery.

Last season it would have been a disaster to have Coquelin injured. This season we have two players who can come in and do, dare I say it, a better job. That’s not to say that it is in any way a good thing to be without Frankie Cockles, but we will manage in his absence.

I just hope that once he comes back he will still have the same passion that defines his game. We have seen players afraid of committing too much after an injury so imagine 2 in the same place… Fingers crossed it’s better than what we fear.

Coq was given a real seeing to yesterday by a number of chelsea players (basta d’s ) let’s hope for he’s sake it’s not as bad last year’s.
But as for Arsenal we have Xhaka and Elneny as cover for Coq

Quick recovery , but no need to worry we have depth.

Coqs big enough to handle it….

Damn. Why does this never happen to the horrible cunts in the game like Costa.

Why does it take close to 72 hours to diagnose the injury , in NFL players injuries are diagnosed almost immediately and part of it is because they have the X-ray taken usually inside the stadium . It would be a good investment to have one such machine in the emirates so that if a player sustains an injury a quick X-ray and prognosis can help to determine how quickly he can be treated and sometimes can also help in preventing the worsening of an already picked up injury while in play .

Really hope he has a speedy recovery. We need BOTH Coquelin and Granit. Granted its great to have Granit come in and simply slot into the whole framework seemlessly, we will need a bit of rotation. Opportunity I suppose for Elneny. He’s bulked up a bit. But all those professing to know better than the gaffer simply don’t understand what he’s doing. Coquelin’s forward pressing in conjunction with the rest of the team unsettled Chelsea and led to Cahill’s comedy. Wenger also showed preference for the most established partnership in Coqzorla. That doesn’t necessarily mean he has no faith in… Read more »

I hope we get to play with our Coq again soon! But I love the fact that we have a £35m player to fill his boots as well as Elneny who can do a job. Gone are the days of sticking a child back there or a Denison back there!

Really hope Coq recovers quickly,he s been playing very well. However, we do have a top central midfielder in Xhaka who can also tackle on top of creating play going forward. With Elneny as a back up we will be fine.

Coquelin is Busquets of Barcelona, ​​the spare tire, no equal in the arsenal like him, behind alexis, ozil continues Coquelin, so important is the work done by the French in the team and can not do without a player characteristics, that goes for all those who unjustifiably require ownership Xhaka

I wonder if someone comes to the comments section just to satisfy their fetish for thumbs down.
Come on man, there is thumbs down in each of the comments. Who does that?