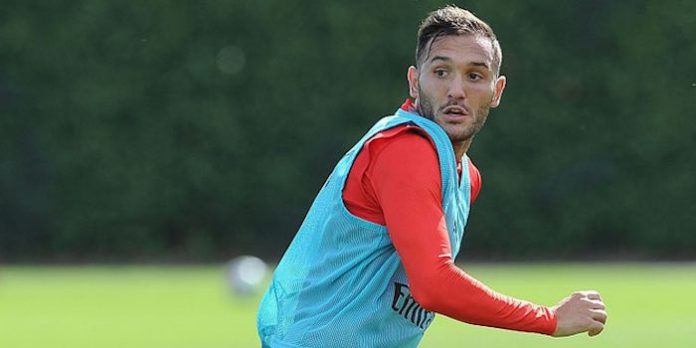 Arsene Wenger says that Lucas Perez has the ability to play from wide positions, but that he bought him to add a different kind of threat as a central striker.

The Spaniard had a stand-out season playing up front for Deportivo la Coruña las season, and it’s there that the Arsenal manager sees him most often in this Arsenal side.

Speaking to the official site, Wenger said, “I see him more centrally, especially that’s why I bought him. He was a little bit of a late developer and as well I believe he had big success because he changed position and he has been moved central.

“He’s a left-footed player who has good movement and good link play as well. He’s not only a goalscorer, he’s good in assists as well and because he has played on the flanks before, he can give a good cross. He has a short backlift and is very dangerous in the box.

“He can play on the flanks because he has done it before, but my target was more to add one more player who can play through the middle.

“With the way I like to play, that’s an interesting quality.”

I can’t wait to see what he brings to the side. Lucas #9 has a nice ring to it.

You mean the guy with 130 caps for Germany and nearly 40 goals?

Hmmm, if he’s half as good on the pitch as that guy is be pretty happy.

As long as he scores/assists, anywhere is fine…

Is Santi the only true veteran starter? (Can’t quite count Theo.)

The Manchester managers have cutthroat reputations, but Wanger has quietly redone the squad. Some angst, but love it and believe we largely needed it.

Inadvertent trolling. Apologies to all.

“He is a little bit Eduardo you know.”

After a long and drawn out transfer window, we finally got the transfers (we think) we needed. Follow this with a dull international break, a new article and a new quote each day from wenger..and it’s really building up the hype about our two new signings! Let’s hope they can live up to our expectations! Looking forward to tomorrow and hopefully seeing Perez in action. COYG

Thank fuck for that. I’ve always hated to hear it. Totally disrespectful.

Brace yourselves. Left-footed volleys are making a comeback.

Hmm. He did also say he doesn’t see Walcott as a winger then started him there every game since. This should be interesting. Can’t wait to see him link with Ozil though!

Former bosses talking about Lucas Perez. Worth a read.

If he is half as good as this piece makes out he will be a success for us. If he really is that good this will be a fun season to watch!

I wonder if the translation made these seem a bit more emphatic?

Would be great to see a By The Numbers piece on this guy.

I recall a tricky little Russian who had one, but he couldn’t resist a pie.

Selection headache for wenger. Grow some and go 4-4-2

yes, because playing Ozil (and potentially Sanchez) as a wide midfielder in a 4-4-2 makes perfect sense…

He wasn’t saying that fool

What was he suggesting? Playing a diamond? If you played a 4-4-2 who would you actually play, and where?

wow, resorting to name-calling rather quickly.

4-4-2 could definitely be an option, especially when we are behind.

Giroud plays well with someone to run onto his flicks and nods and and Mesut can play out wide, with fantastic delivery (see: Euros assist to Schweinsteiger).

Honestly, we tend to be a bit narrow in our attack. Getting the ball out wide to a playmaker like Mesut can offer some tactical options (a plan B).

Exactly. Thank you. Take your pick in midfield but giroud plus lucas or alexis or even wally at a push!

Perhaps I am mistaken, but if our problem is that our attack is too narrow, then we need wingers and overlapping fullbacks, not a diamond midfield. I think that Ozil plays wide for Germany when they have no recognized striker, not when they have two.

4-4-2 Diamond is a slightly different tactic than a traditional 4-4-2 with wingers. In a traditional 4-4-2, the central midfield tends to work in a “pulley” setup (one advances, the other drops back to cover). If the ball goes to one side, the winger and fullback both advance, still leaving you with 3 defenders for cover. It’s weakness is that you can be over-run in the center of the pitch by 3 man midfields in solo striker formations. In a diamond setup, you have a DM, 2 central midfield (all-around players) and playmaker (the diamond shape), along with the strikers.… Read more »

Absolutely. Why are we not fielding ten strikers plus Cech?

which is why you’re a hugely successful football manager, then? If it’s that simple, why stop there? Why don’t we just play a 2-2-6 and line up with Giroud, Lucas, Sanchez, Walcott, Akpom, and Sanogo up front? Surely we couldn’t fail to win a game with all those strikers on ready to score their trademark game-winning goals for us.

Fuck me, we haven’t even kicked off yet, leave it out fella’s

Stop fighting over your tits! You guys are giving me a (selection) headache.

Was just asking what pfo stood for.

What I “stand for”? Not sure I understand the question. I’m sorry if I reacted too dismissively and sarcastically to your suggestion to play 4-4-2 and that upset you. Personally I don’t want us to play that way because (at least according to most proponents of that option) it will almost always involve starting Giroud, and while I don’t mind him as a plan B, I’d prefer we don’t adopt a formation that gives him a central role in the team in most games. I just think he can hold us back in certain ways and after several years relying… Read more »

And wenger hasnt been hugely successful for over 10 seasons now.

Whoever thumbed that down are you saying 4th or 2nd and a couple of fa cups is hugely successful? With the prices we pay, cash reserves and a tactical genius in charge, he needs to deliver titles again and better than last 16 of CL

Will Theo finally play in his best position as left waterboy substitute in the reserves tho?

Play him as a number 9. We need the fluidity of old upfront. Imagine alexis perez and an inform walcott up front. It’d be Chaos. Alexis loves and thrives playing alongside a mobile striker. We’ve seen this time and time again with welbeck and walcott.