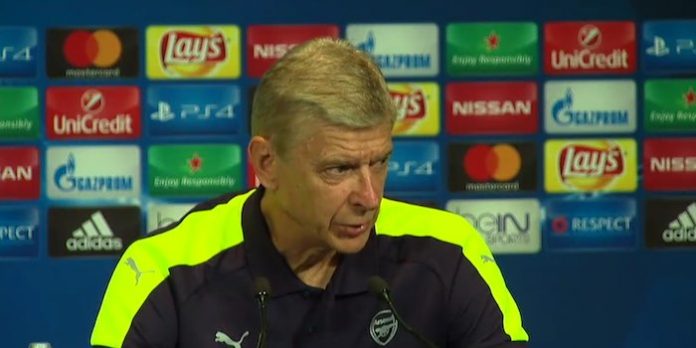 Arsene Wenger has provided a team update ahead of tomorrow night’s Champions League tie against PSG.

Laurent Koscielny has made the trip despite concerns over his swollen eye, and should be ok to play.

“He had a big knock to his face, I did fear that he might miss the game,” said the manager, “but he is all right. He has recovered quite well.”

Beyond that there don’t appear to be any other fitness issues for the manager to contend with, although it’s expected that he will rotate his side a little bit after Saturday’s win over Southampton.

Olivier Giroud, Alexis Sanchez and Granit Xhaka are all expected to return to the starting XI as we look to get our Champions League campaign off to a good start.

Same time last year, Ooooospina was playing is first game of the season. I suppose he will have to wait a bit longer this time. I really hope we top the group and lead by a big margin so he can play the CL too at some point.

I think Giroud will score a hatrick if he starts.

4 goals is much more likely

I know Wenger likes to rotate the squad for the CL but please let’s resist playing Osprina, Gibbs & Debucy until we qualified. They will get opportunities to play but it would be nice to field our strongest team and if we get a good result it could be the transformation to our season. I would like to see: Cech, Bellerin, Monreal, Mustafi, Kos, Coq, Xhaka, Ozil, Iwobi, Sanchez and Girroud.

No place for Santi? I’ll rather Santi for Coq.

I’d rather El Neny Xhaka. El Neny is very solid defensively and a much better distributor than Coq. He is excellent for retaining posession and stifling momentum

We do have a few of those that can do that when our enforcer plays.

Coq has a fairly decent range in him for one even though he is a ball winner. Also playing a player like coq in this sort of match is a good idea, psg do have a fairly energetic midfield. On top of this all of our player do not need to be able to olay killer forward balls. We learned this for some time before the coq himself rose and solidified our term. You need a variety of players in a successful team.

And don’t rotate or rest first choice players until we are guaranteed to finish top of our group. Otherwise we rest players in the last few games and end up finishing second and then have to play Barca or Bayern in the next round.

It would appear that our objective is to advance rather than to win the CL. We need to build a team that should be capable of taking on the Barcas and Bayerns of this world at whatever stage of the competition. My impression reading all this is that we believe that meeting Bayern or Barca in the round of 16 spells exit for us. So let’s come first in our group so we can exit later than round of 16. To win it we have to meet and beat those teams.

Grande! Time to stuff some fillet mignion up them **ses

I don’t want to get ahead of ourselves here but the fact that we can ‘rest’ players luke Giroud, Alexis and Xhaka is something we haven’t had the luxury of…in what feels like 10 years. I’m always wary of Champions league away game, no matter what the opposition, a draw no bad result, but a victory will boost confidence no end.

This seems like the kind of game that would benefit Lucas as PSG will have to play attacking football at home, leaving space for our new number nine to exploit. Anyway, I’m sure we can get three points with Giroud leading the line. COYG!

Little Mozart, I was rooting for you when you said game is perfect for Lucas. Then you ended by saying Giroud would score a hattrick. We couldn’t possibly field both of them in an away game against one of the best sides in Europe. That would mean an ultra-offensive line-up.

PSG 1 – 5 Arsenal fc. it’s just about time we spank a supposedly European powerhouse in their own junkyard

Wouldn’t get THAT optimistic but I’m hoping for a good result. I fancy us to win the group this year for a change 😀 PSG are good but not amazing.

What’s the bet we win our group and Bayern or Barcelona finish second in theirs? … You know the rest.

That reminded me of watching the Inter game in 2003 at about 6am in a weird motel near fox glacier in New Zealand’s south island. I was camper banning with a kiwi sooner and we splashed out for a night in the motel so we could watch the game. Money well spent.

Giroud will enjoy being in France tomorrow, I feel a brace coming for him.

PUMPED. This is what football’s all about, big European away games. COYG!

Watched their game against St. Etienne and they were very lacklustre, they had rested Di Maria now but overall Matuidi was their only real threat throughout the game.

A draw would be a decent result but they are currently there for the taking..

Anybody think Wenger will play Lucas on the right?

That would be interesting. Rather than Theo.

Any tips on how I can get out of my own birthday dinner so I can watch this game?

Yeah… Say “fuck you friends, it’s my birthday and I’ll do what I want”.

Download Live Media Player on your phone from the App store and watch while you are eating!

We’ll present you with a 2-goal Arsenal victory on your birthday, mate – have a blast 🙂

I think I would go with this XI:

Not sure about Theo…but who is??

I think we need to rest Santi’s little legs and use someone with a bit more energy a la El Neny. His tidy short passing and energy box to box will compliment Xhaka’s deep playmaking and shielding of the back 4. Also he’ll cover more ground defensively than Cazorla freeing Ozil up to always be a threat.
Cazorla is at that time in his career where he needs to be looked after.

I like your input basically what i have been telling my friends, xhaka playing deep with his long passed, ozil to receive them and assist giroud. sanchez will have to play behind giroud to finish up things. elneny is good with his short passes a key contributer to this game linking up with ozil. I would have Perez get in as a sub in the second half, he can still start though and giroud to get in as a sub that would be nice.

Definitely, I’m really looking forward to a midfield trio of El Neny, Ozil and Xhaka….Unfortunately I don’t get to pick the team lol. I’d look at a front 3 of Sanchez, Giroud and Walcott. Walcott the runner off the ball for the likes of Xhaka and Ozil to pick, Giroud for hold up/link up and Sanchez for being Sanchez 🙂

Have a couple of beers and tell them the day of ur birthday has been changed.

12th Man in the Clockend

I absolutely love the STRENGTH and depth our squad has now got. I got shivers knowing we put a very good 11 out for Southampton with 3 big names on the bench. Lets hope and pray that this will end our injury hoodoo….?!

Sorry to say this but in fearing the worst… PSG can keep the ball for fun and were one of the worst teams around at winning the ball back. Whenever we play possession based teams at this level we suffer. Just hope we press well as a team

I was thinking the same mate.
Need to get at them and cut the passing out through pressing.
Shame no Danny fit, a trident of Lucas, alexis and danny would work so hard from the front.

2/3 ain’t bad though, I’d be starting LP9 over giroud today for that reason.

Back 4 and keeper stay the same.

Giroud likely to start. There’s a reason why he wasn’t started against Soton.

Other flank is open. I don’t think it will be the Ox or Walcott. Maybe Iwobi. OTOH if Wenger should think PSG is suffering from nervousness or a gap in capability at the back, then maybe he could start Theo.

Mids will be Granit for certain then maybe either of Santi or Elneny. Preference for Santi and then Elneny to carry on energy levels.

You only get seven subs.

Never have I seen such flagrant optimism on the arse…
..And although I want it to make me more cautious
*slides stack of casino chips into middle of the table*
I’M ALL IN BAYBEE *double hand pistols*

The Only Olivier is Giroud
Reply to  GJ

Psg have a really good team. We do need Coq and Xhaka in d middle to disrupt their rhythm as much as possible and play on the break. Let’s not judge them on a few bad results this season, their line up is still d same bar ibrahimovich.
We need a disciplined performance. Not sure I will play Santi in the first half

Neither team have started the season very well and this fixture, on paper, looks like our hardest challenge of the group.

A win would be great, but l’d take a draw now. GOYG!

Would definitely start Elneny and Xhaka as the DMs. Carzola did great on Saturday, but worry it would be too much to start him on such a short turnaround.

I assume Giroud will start due to his experience at this level, but nice to have Perez off the bench if we need him. The other question will be the right wing and whether Iwobi will return to the starting lineup or if Walcott will stick in that spot.

Start perez and if we cant play our game how we want to bring on giroud. Defo go for xhaka coq ozil with perez sanchez iwobi. Back four names itself really.