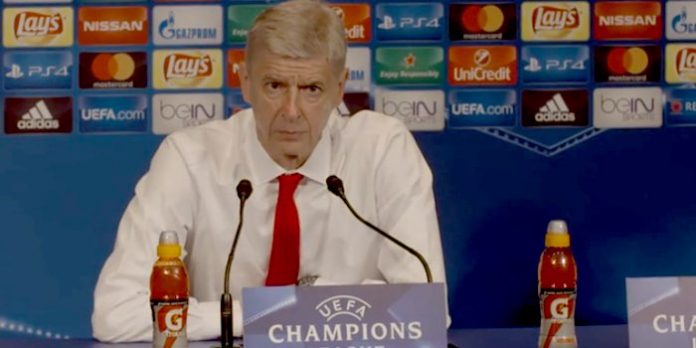 Arsene Wenger says Arsenal’s European experience helped them win a point last night against PSG. The Gunners conceded after just 42 seconds and, but for some outrageously wasteful finishing, might have been on the end of a real pasting.

However, the home side came to rue their missed opportunities – as is often the way – and Alexis Sanchez’s equaliser was enough to take a point back to North London.

After the game the manager admitted his side had started poorly, but said an improved second half display was down to the fact his side kept going under difficult circumstances.

“When you start so badly against a team of that quality you need experience,” he said. “If you are too young, you can be caught. I thought that we didn’t panic, and overall we were resilient enough, and the resilience comes through experience.

“I told the players at half-time that if we keep playing we will come back, because we could see if we had better possession we could score goals. They played at a high pace, but even in the first half I think we were in trouble mainly when we lost the ball on the counter-attack because they pressed well.

“Overall, I think it was a good result to come here and not lose and pick up a point.”

It’s certainly a better start than last season’s European campaign, but obviously there are things in the performance and team selection that have to be addressed before the next game.

I like how he phrases things…he is too polite, publicly.
But I think he really has seen the same game though. Hope he has…

Where are all those people who wanted to buy Edited son Cavani over this summer transfer? Vat got your tongue?

Not a great performance against PSG but a good draw. We need to find a better way to link play between defence and attack. We also need to find a way if playing against a high press.

The issue is not whether Alexis can play CF but whether the Midfield 5 can be made to work effectively against pressing teams. We would be crucified against Shitty or Barca playing the way we did.

I’d still sign Cavani tomorrow if we got him for a fair price. Don’t be so short sighted!

If it was Giroud or Walcott playing like that, they would be crucified. I think you are looking at reputation rather than performance here!

To be honest although his finishing was comical the runs he was making were different class and once hes got confidence back hell be burying those. I actually think an on form Cavani with Ozil finding those runs would be devastating.

I saw nothing in Cavani’s performance that would be better than we have already got. There are people who believe the grass is greener and totally ignore what we have.

The real issue is the Midfield was not playing well and it may be down to balance.

Can’t go into a game talking up the experience you are glad to have in the squad and then sugarcoat a bad performance as ‘gaining experience’.

Systems not working, sort it out Arsene, ASAP.

Erm he didn’t! Wenger said that it was thanks to the experience in the team that they dealt with a difficult situation and came away with a draw.

Yes, but if you read the headline and not the article, how would you know that?

As an intelligent manager,he expressed his analytical thoughts succinctly and correctly. I am no football pundit,but Arsenal in the first half could not keep the ball.PSG wasted their chances and in the second half our boys were not resigned to failure,but conjured up a fight mentality which paid off. They are now grinding out difficult games,with the hope of winning. Let us as fans support them to the hilt.

Couldn’t have said it better myself.

I didn’t see experience in last night’s symbolic display in france. Arsenal has to be thankful that Cavani contrived to fall over like a stunned goat when it seemed easier to score. ospiiiina earned his corn in a big European night

I thought that in difficult away games like last night we would be playing with a double pivot of two of Xhaka ,Elneny and Cocquelin to absorb pressure and then counter attack with pace. Easier games, home or away, we would be playing with Xhaka at the base to allow both Cazorla and Ozil to play centrally ahead of him. How could I get it so wrong ?
Is Xhaka not cutting it in training I wonder?

Maybe it is down to the red card he recently got (again) – a bit of disciplinary action or so ..

I think Xhaka and Elneny were being rested for Hull. It’s important not to drop more points in the league if we’re to qualify for the 20m CL cash cow next season, at which point we can put out a weakened team again so as to qualify for the following season – and so it goes on. There was nothing unusual about the team selection, or the lack of focus in the defence, or the fact that PSG looked fitter, slicker and massively more confident than us – actually overconfidence in the second half was probably their undoing – Wenger… Read more »

The problem with playing Alexis as a striker is that our other wide forwards aren’t very good.
The Ox and Theo have far more bad games than good ones.
Giroud is still our best bet as striker until Welbeck comes back.
We we’re doing ok up until November last year when Santi+Coq both broke down both with results+performances.
I’d get back to this.
Cech
Mustafi Koscielny
Bellerin. Monreal
Xhaka Cazorla
Rambo Ozil Alexis
Giroud

Your opinion is Rich!

Unyoke The Ox
Reply to  Rich

Theo’s been pretty effective this season and has actually learned how to beat a defender. Giroud is also still better than Welbz and we haven’t seen enough of Perez to rate him properly.

I can’t understand why he started with cazorla in this game. Clearly AW set up to play on the counter, so I can only assume he played santi to create fast breaks – BUT, We have the options to play two defensively minded CMs, all of whom have creative ability and can start a move (or at least pass with enough accuracy to supply mesut Ozil to do his thing..) So why on earth start with santi when we have the better defensive options that were so blatantly needed (as has been the case on many, many tough European and… Read more »

This is my issue too. You have a team selection that can only be justified by setting up to defend and counter then within the first minute we have both CBs on the centerline, both FBs ahead of it and Coq farther forward than he ever should be. In other words, same possession and undermanned defense you’d see at the Emirates against a Tony Pulis team. WTF? Tactics didn’t mesh with team selection and that is on AW. And yes, City and (God forbid) United will murder us if we play with such tactical naïveté against them.

Experience my arse, if cavani took the sitters he was given we would of been hammered even with all the super experience wenger shites on about

I adore Wenger………..but I fear he may be losing it.