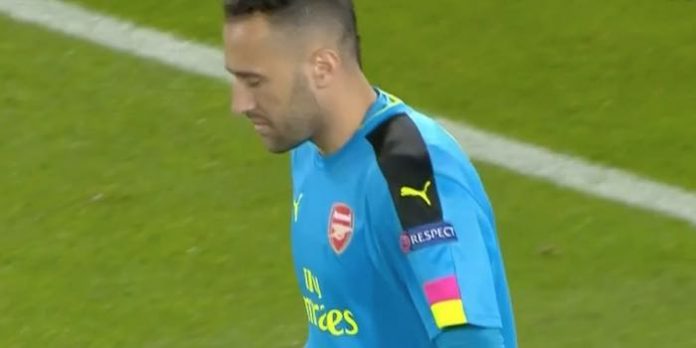 Arsene Wenger has hinted that David Ospina is set to be Arsenal’s Champions League goalkeeper, claiming that the Colombia and Petr Cech are both aware of their roles for the season ahead.

The former Czech international gets the nod in the Premier League, and although Ospina’s selection raised some eyebrows before kick-off, his outstanding display went a long way to securing the point in last night’s 1-1 draw with PSG.

The Arsenal manager was quizzed about his selection decision after the game, and was keen to stress the quality of both his goalkeepers.

He suggested that it had already been made clear to them who would play and when.

“we have the roles that the keepers know,” he continued. “And that’s why it’s important to have clear roles when the season starts and when that changes I inform them. But they know what the roles of the season are.”

As for whether Ospina would play in the next game, at home to FC Basel, he said, “I would not like to answer that question tonight, because we can always change our mind because it’s down to performances.

“He has the right, based on what he did tonight, to stay in for the next Champions League.”

So, there we go. It was an excellent performance, and the Colombian was the highest rated player by Arseblog readers after the game.

Was worried when I saw that Ospina would be starting. But what a game he had. Shaky start, but was fundamental in keeping us in the game.

May get voted down into oblivion for this but I’d play him at the weekend. Cech hasn’t had the best start to the season.

I know I’m speaking for a lot of Arsenal fans here when I say I was genuinely worried that Arsene gave him the nod over Cech, but you have to give it to him, he genuinely was the difference last night – he made that really crucial save in the last 10 minutes against Cavani where he rushed out, 1 on 1, and he scooped the ball away from under Cavani’s feet in an excellently timed bit of goal keeping – he gets that wrong and it’s a penalty and we lose the game. Top drawer stuff. Hopefully his performance… Read more »

I for one thinks Ospina deserves his run in the UCL. He’s far too good to be playing so little.

I suspect Wenger really believes in Sanchez up front. Similar to RVP in 2009 when wenger moved him to lone striker, or moving Henry from the wing. Struggled initially but it paid off eventually. Having said that I’d still rather see alexis on the wing.

What’s happened to Monreal? Seems a bit rusty so far…

wondering if we go for Rodriguez (Wolfsburg) in Jan. Ship Gibbs out and keep Monreal as a backup. He certainly looks a little slower. I hope it’s just a matter of finding his groove in a few more games because he was our most consistent defender for 2 years.

Ospina has his weaknesses (dealing with balls in the air into the box like crosses, corner kicks, etc.) and distribution, but certainly is a great shot stopper and does very well in 1 v 1’s. Much quicker than Cech especially going down for low balls and to me is not a big drop off from Cech. We are lucky to have two solid keepers and Ospina absolutely deserves some games. I do see Wenger staying with Cech in the league and Ospina in the other competitions for now, but has shown in some instances he will go with the hot… Read more »

Ospina is one of the best cup keepers in the world, and his performances have confirmed that. Seems logical that if we were using the two keeper system that we would use him in the cups and thats essentially what the CL is. Also, his weaknesses are more magnified in the English game, so seems doubly logical. However, my only annoyance with Ospina is he is a bit of an embelisher. Seems he gets a knock in virtually every game which almost takes him out, but usually it seems to me to be something that most keepers would shrug off.… Read more »

Good to see David Ospina getting the love he deserves. If he made some of the mistakes Cech has made lately he would have been slaughtered. No goalie is perfect, but I’m always happy to see Ospina get games.

One save in particular, where he palmed the ball away as cavani tried to go around him, that was world class. he will definitely start next CL game, and if Cech keeps letting long distance shots in he might get a run in the league as well. Nice to have two very good goalkeepers, and Wenger is right to play them both.

Yeah and it came immediately following Alexis’ goal too, Cavani got by Kos a little to easily in that instance and we almost handed the advantage right back to them, but Ospina was on his toes and just – JUST – got a fingertip to it to divert the ball away from Cavani. It was brilliant goalkeeping under a lot of pressure at a critical moment. I was among the many who were doubtful regarding the change, but now if/when Ospina gets the call in the next group stage game he’s earned complete confidence from me.

I’m baffled why he was rated so highly after his performance yesterday. I think he played well, but many of the saves he made were because of his own mistakes in distribution. He had a really good performance, don’t get me wrong, but we’re skating over the few times his distribution directly led to chances on his goal. Furthermore, I thought Koscielny was poor and suffered from his weekend injury (or so it seemed). In fact our whole team was defensively very poor, and we were very lucky to get through. It’s quite satisfying to not feel hard done by… Read more »

Only one of his saves was after poor distribution so no need to exaggerate. What’s most worrying is this CF experiment and our midfield letting teams run through us. And Ozil looking like the idgaf Ozil of 2 seasons back.

no problem with this . Good performances will put pressure on Petr Cech to up his game!

Distribution can be fixed easily, his courage and saves in the face of mounting opposition attack was world class. He was MOTM for me

We all know your biases against ospina blogs.Funny you still struggling to give credit where due.Ospina is certainly a world class keeper.

Yes, struggling to give him credit by saying he was excellent, man of the match, and giving him the highest rating out of an any Arsenal player.

You shouldn’t rise to it Blogs.
Keep up the good work!

I can only recall one instance where his distribution was to blame for the chance ( for which he duly made amends). His kicking may be poor (hardly goes past the center line) but I hardly think his distribution is as bad as it seems to you. I do agree Koscielny’s positioning was amiss yesterday. He went missing for their goal. Him and Mustafi have some synchronising to do. They are both aggressive defenders that attack the ball unlike Per whose strength is in his positioning. We had similar issues with the Galas & Kolo Toure partnership. They were too… Read more »

I hear a lot of “Cavani was terrible” and I utterly disagree. Great goalkeeping makes the best strikers look ordinary, this time Ooooooospinna! Made him look! A good example is that time he forced him out wide and showed him the side netting to shoot at, he harried and hurried him and closed him down! It was all Ooooospinna!
And don’t tell me to not get ahead of myself, have your cuppa tea however u want yours, I’m having mine at least half full and creamy.

People moaning (as they always seem to do) about Wenger making changes. Plenty to whinge about not starting Giroud maybe or Xhaka but Ospina? He put in an excellent display. He deserves feature this season and that certainly seems to be in the plans to play him for the cups. That said, I think as someone-else mentioned the comparative strengths of both keepers. Cech is generally better dealing with crosses where Ospina is a better reaction keeper. There could be call then to be a bit more nuanced in approach, less absolute. Say if we face a tall pysical side… Read more »

Not convinced Ospina warrants a place above Cech at anytime as all competitions are crucial, except perhaps League Cup. Crucially, he does not dominate his box, especially at corners and crosses. I am always edgy about this. Remember West Ham last year. Good shot stopper, but does not convince me overall and add that extra confidence needed to his defence.

Remember Cech first game for us against Westham too? Cech makes mistakes as well, baffling

I remember one of the things we enjoyed about Cech when he came in was his ability to martial the defence.
I didn’t see the game so only commenting on highlights and comments. But it seems the defence was all over the place and that’s why Ospina was called upon.
Is it wrong to suggest that the defencive shambles may have been in part at least a product of how Ospina managed the defence in front of him. There’s more to goalkeeping than stopping the ball.

Ospina is largely an underrated goalkeeper, whilst the arrival of Cech at the club created the perception that he was second rate. Not the tallest, but a fine shot stopper, and certainly deserves to be more than an occasional back up and bench warmer.

ospina’s selection raised my eyebrows. His subsequent performance lowered them.

Ospina is better suited to the Champions League than the EPL. Games are generally slower, less physical, and there are far fewer crosses, so his (relative to other keepers) lack of physical stature is less of an issue.

I’ve posted on twitter a couple of times that more mistakes seem to be creeping into Cech’s performances. Its an old drum to beat but the goalkeeping coaching at Arsenal doesn’t appear to be as good as it could/should be.