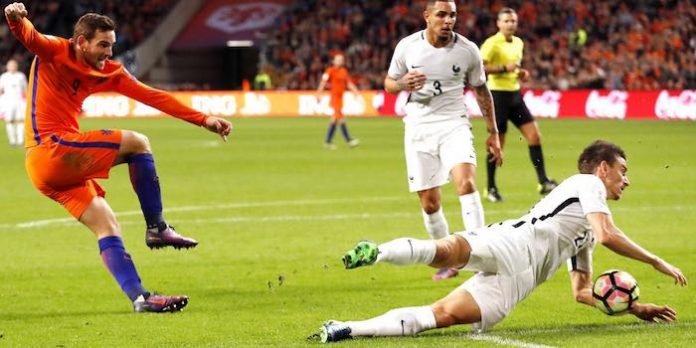 After a bit of an injury scare last week, Hector Bellerin appears to be just fine as he played the full 90 minutes in Spain U21s 5-0 win over Estonia.

The Arsenal right-back had taken a bit of a clatter to the ankle against San Marino but was fit enough to play the full game for Albert Celades side.

With Arsenal short of right-back cover at the moment, it’s good news, but this is already Bellerin’s 11th game of the season (he’s played to the final whistle in almost all of them), and although he’s young and full of energy, at some point we’ll have to give him a rest.

Meanwhile, there was Arsenal involvment last night for France as Laurent Koscielny put in what was described as the ‘perfect’ centre-half performance in their 1-0 win over the Netherlands.

‘Koscielny: new dimension’, said L’Equipe, adding, “He probably signed his most accomplished performance in forty selections, prevailing in all areas of the game with a head of authority in the France team. We had to cover on the side of layvin kurzawa? Koscielny was there. We had to give the shoulder on Janssen, who had a tendency to mistreat Raphaël Varane? Koscielny was still there.

“We had to cut the balls of the head late in the game? Always present. He took arise to intercept another, in the first period, causing the opening goal Pogba (30th)? He, always him, him again. His ability to defend standing sense of anticipation and reading of the game were valuable assets to destroy the Dutch offensive.”

We couldn’t have put it better ourselves.

He might have been well served by France finally sporting decent looking kits after what seems like a decade of football-fashion horror shows.

Sorry, 2004 was the last time they wore anything anywhere near “timeless”

Didn’t you know he Kos the boss? Well now you know.

Kos is an incredible player! And being French, i keep on reading comments from so called fans ignoring him… Anyway at least the Arsenal fans know the luck we have to have this gem with us!

The game was miserable but I enjoyed it just for our Kos. I’m surprised no Dutch player hit him a slap for being so good, like how you hate when a really good player plays your 5 a side game, reminding you just how shit you are. Dutch shouldn’t have offended him by putting a spud in his vicinity.

This guy has never got the credit he deserves. I’d go as saying that Koscienly is currently the worlds best defender , above the usual media favourites like boateng , bonucci , Ramos and T.Silva

Bronze statue of Koscielny’s ‘pied piper’ celebration after the goal he scored against Newcastle to secure 4th, please.

Love this guy. He monsters every game he plays. I think it’s quite possible we have the best back four in the league now.

Best injured players on there way back ramsakerwel

Kevin from malta
Reply to  Gio

I believe you meant “the Boss”. “The Loss” might be a more fitting nickname for a defender like Gary Cahill.

“Phenomenal midget.” What a phenomenal way to put?

There’s a reason he’s the ‘boss’. One of the best in the world at the moment.

While some twats thinks Pogba is the only player that gets the 3 point. The most underrated defender in the world. #KosstilltheBoss

Never in doubt- confirms what we all know about Kos. But my favourite story is still that he donated €600,000 to save an accordion factory from closure

tapps
Reply to  The Blerch

That’s only accordion to some newspaper reports. Anyone seen my coat?

twopack
Reply to  The Blerch

I agree, he was instrumental to its survival.

Damobot
Reply to  The Blerch

I think if you think that’s his finest accomplishment as a human being then what sad times we are living in. To save a factory that makes more useless entertaining things over what we can describe as human tragedies that beset our fellow humans everywhere is not to be admired my friend, but to be bewildered.

Says the guy using a worldwide network of computational power and human interconnectivity to comment on a football blog.

Well aren’t you a twat.

I’ll put my hands up and admit I initially thought the verminator had more potential but I am wrong about so many things.

It Is What It Is
Reply to  Cliff Bastin

I’ll blow my own trumpet and say I called it – his immense potential, and being better than Verm- early on.

Why? Despite the early mistakes, that couldn’t keep happening every week, he threw his body around like a maniac and had good physical attributes. Also unlucky with some of those cards…we had a victim mentality and feeble mental strength.

Considering this is AFC, surprised at his relatively low injury rate. But glad…very, very glad. Auto-back-pating over.

Loving our mental strength these days.

Blogs, info for you:
Apparently if Sidibe’s interview is to be believed (http://www.lequipe.fr/Football/Actualites/Pourquoi-djibril-sidibe-a-dit-non-a-arsenal/735429), Arsenal tried to get the Monaco fullback but he refused to move, citing a possible lack of game time.
So we were looking for a fullback, it is now clear.

Also says in the article: arsenal wanted to put me on the left flank, but I am established on the right and want to develop there.

So Arsenal didn’t want a Bellerin replacement or backup, but one for Montreal / Gibbs it seems.

Whenever you need to cut the balls of the head, Koscielny’s your man.

Concerned about Bellerin playing so much.

Cech, Bellerin, Mustaphi, Kos, Monreal…. Not bad is it….I thought Wenger couldnt do defence?On a side note, has anyone seen Fatgunner? Seriously, though i didnt always agree with him I liked his little doses of miserableness.

Not sure what the sarcastic tone’s for. It’s an unquestionable fact Wenger doesn’t do defense. If he didn’t inherit that famous back five of Lehmann, Lauren, Campbell, Toure and Cole he’d have never gone 49 undefeated!

Hector Bellerin, a man so fast even injuries can’t catch up.
.
.
.
No, I haven’t jinxed it but I’ll see myself out

I’m am not going to start imagining the Spanish international coaches constantly in Hector’s ear about how he needs to move back to Spain to ay for the senior squad. No. I won’t.

Just did a google for best centre backs articles. I can confirm 2 things:

1. He is criminally underrated.

2. Some journalists talk a lot of shit.