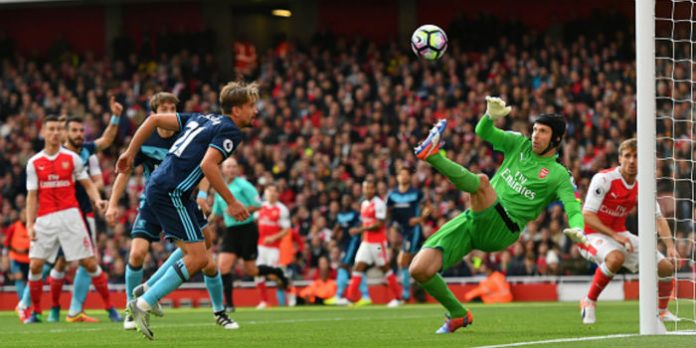 Petr Cech says Arsenal paid the price for rushing their build-up play as they were held to a frustrating 0-0 draw with Middlesbrough at the Emirates.

The Gunners thought they had stolen the points in stoppage time when Mesut Ozil converted Alex Oxlade-Chamberlain’s cross-shot only for the offside to be flagged by the referee’s assistant.

A victory for the home side might have been deemed harsh on the visitors who could have scored on three occasions were it not for the heroics of Cech. Speaking to Arsenal Player after the game the 34-year-old reckoned a draw was a fair result.

“We had a lot of possession but I think we rushed a little bit in the final third.

“We could have kept our cool better in the final third to find a better pass, to have better opportunities to score. We had a few shots where the goalkeeper did very well but in the end we didn’t find the goal – which is a shame.

“Overall, they had plenty of chances as well so I think we have to say maybe a draw is a fair result.”

“When they had their chances and they didn’t take them I thought that we were going to punish them for that,” added Cech.

“We had 45 minutes in the second half to find the goal, but we lost a little bit of our calm in the last third which is unlike us.

“But that’s the kind of game which can always happen. We know there’s a long way to go, I think we look in very good shape and just need to go back to work and carry on.”

Yeah no need to go into too much conclusions here. The team has looked solid recently and you can’t win every game, especially after a midweek CL game. Though we need to have Giroud back if we are going to have a chance at the title this season.

To think, I honestly wondered whether Ospina should start over Cech!

yeah, was commenting on another article that Ospina starting over Cech is not unthinkable, and Cech produced a masterpiece to silent all (including my) critics.

it is always easier to manage a team in the gaming world. :p

Playing mid week is not an excuse. Boro defended well and we lacked spark to create chances.

Please explain to me how playing a champions league game on Wednesday then having a 3 PM kick off 2 days later against a team whose only objective was to defend and make you work as hard as possible for a shot on goal would not affect a team’s perfomance.

Sp*rs and Man Shitty both dropped points, and Leicester deliberately rested their star players the previous week. “Playing mid-week” is not an excuse, but it’s a reason!

One thing that is pissing me off is the Ox. At the end we saw how he can run with the ball and create chances. However, until that point the whenever he got the ball he was passing it or pinging it to the wide players. Whenever he’s on the ball you know something can happen and you scream at him to run with the ball and he doesn’t. We all know he can dribble well and with control. Ox needs to have more self-belief and take players on which in turn would create chances. He has that ability just… Read more »

Well pundits favourites man city couldn’t beat Southampton – I assume this means they have no chance of winning the title? Thought not!!! Dippy pundits!!

I was going to say the thing about Santi Cazorla before seeing the By The Numbers article and I just decided against saying anything more.

Cazorla is as big a star in that team, if not more, than Mesut Ozil/Alexis. Plain and simple.

We manage without Ozil most times on his off days. When Santi’s missing we’re mostly just huffing and puffing.

By far the most important outfield player of the last 4 years, together perhaps with Koscielny.

He’s also been my favourite player since his arrival.

We can’t win every game, that’s not possible for anyone. It was a hiccup that was bound to come at some point and the great thing is we didn’t lose, we got a point. And with Man City drawing as well, it’s a good point.

Sorry…I also meant to add. 3 games in seven days is too much for any team, however good you are.

Many sensible comments here, though I wonder how we couldn’t find that spark in midfield given how many excellent players we have in those positions.

City also dropped points. I thought they were suppose to run away with the title like they did last season according to the press…oh wait… And then there is the Special Needs One. NO longer special, he bought feet of clay in market not that the pundits thought much, as they don’t, they claimed he had bought well and showed ambition spending heaps of money on two less than hungry players and neglecting the rest of the squad. And they said Wenger didn’t know how to buy in the market …panic bought Mustafi.:D Clearly some people are susceptable to listening… Read more »