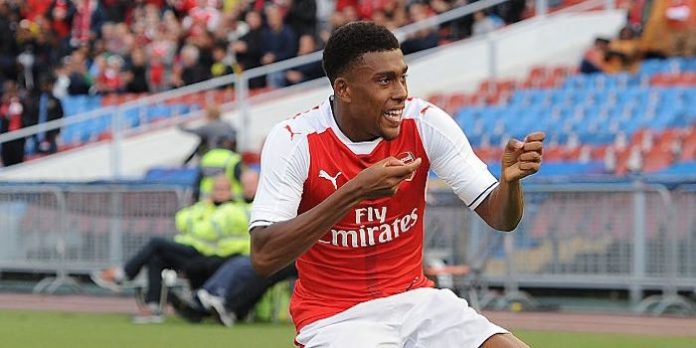 Alex Iwobi has revealed his Arsenal first team initiation ceremony went so badly that he was left singing ‘Happy Birthday’ after forgetting the words to his chosen songs.

It’s long been a Gunners tradition that players called up to the first team squad are expected to perform a song in front of their baying teammates. You may remember a video of Granit Xhaka’s excruciating effort in pre-season being leaked by Emiliano Martinez…

Asked about his own initiation, Iwobi reflected on the horror of failing the task at hand when called up for a match at the Hawthorns last season.

“Oh my word. I had to do it twice because the first one was very, very bad,” he recalled. “It was against West Brom away. And I froze, absolutely froze.

“I tried three songs and I forgot them completely. So I ended up singing Happy Birthday to Arsenal on that day, which was so embarrassing.”

Iwobi also touched on the extreme measures he’s had to take to shake off Arsenal’s more avid autograph hunting supporters.

On the crazy attention from fans, he remarked: “Especially after a game, I’m trying to go home and I see fans almost breaking my car just to grab a picture. It’s just crazy.

“There’s been a lot of crazy things. The last home game we played, I was driving for 15 minutes and there was one fan following me and I was getting a bit scared because I was close to my destination.

“I was thinking: ‘Ah, I’m going to have to make a detour just to get to the destination before he finds out where I’m going.’ That was a bit mad.”

Oh Alex! The Big17… Next time when ‘a bit scared’, Just call my number! I’ve got your back always. Always I say!

I don’t know how most players know a song I don’t know any. The best was nasri rapping with sagna beatboxing

You don’t know any songs at all???

is that a gun or a bow and arrow celebration he’s doing? Bow and arrow is much nicer and would get more style points.

Unrelated, but who has/had the best goal celebration for Arsenal? I always liked Henry’s double knee slides. Ozil’s thumb sucking is pretty weird, but at least he doesn’t do that stupid heart like Di Maria/Bale. I know he played for the enemy, but Cantona’s celebrations were always pretty funny…when he wasn’t kicking supporters that is.

I always liked Paul Merson’s ‘Downing two pints’ celebration. Or Bergkamp showing Sp*rs the back of his shirt.

He’s gonna be a ‘Mad Ting’ in the future.

If you were an Arsenal player(and that’s a big impossible if) and you were asked to sing a initiation song, which song would you sing?

Perfect Sense by Roger Waters probably, Or maybe something either Cohen or Dylan.

As a tribute to Mourinho, Hi-brid?

Well, he has certainly “gotta no respect” (ahem).

I shot the Sheriff (but I didn’t kill the referee)

blind boys of alabama – way down in hole

“When you walk in the gardennn, you better watch your back…”

It always has to be ‘Gold’ by Spandau Ballet… ALWAYS

The Wire!! The King of Television!

Hmmmmmmmm….when is our next game please!

At home to Chelsea his car was mobbed outside the Tollington pub by fans. At those traffic lights there are so many players getting over ran by fans. What strikes me however is how many players have people driving for them, strange really.

I love big butts and I can’t deny

Oh Iwobi you should’ve sing one of the indigenous songs, anyways I’ll get my cap…..

Hahaha washerey… Top gunner nice! They would have looked at him like he was on drugs but nice anyway.. Obey would have been proud

It was not me Iwobi. I swear.
I’m from Kolkata. Come to Kolkata pliss.

Everything about the girl – and miss you like the deserts miss the rain ( ruling the premier league again ) it’s coming I can feel it ?

Everything but the Girl?

SONG FOR MAMA BY BOYZ 2 MEN