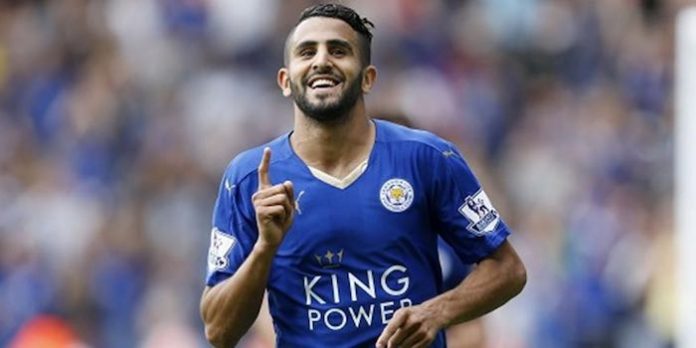 Riyad Mahrez has confirmed that Arsenal did try and sign him from Leicester during the summer but the champions refused to sanction a deal.

The Gunners, who had already failed with an earlier attempt to lure Jamie Vardy to the Emirates, are believed to have lodged a bid in the region of £40 million as they looked to bolster their attacking options. The funds were later redirected to the acquisition of Lucas Perez and Shkodran Mustafi.

Reflecting on the approach made by Arsenal, Mahrez told Canal Football Club:

“There was contact with Arsenal. But Leicester wanted to keep me and I was pretty expensive.

“I did not want to create a conflict when the offer came in.”

Mahrez has since signed a new deal at the King Power stadium but has struggled to match the consistency that saw him win the PFA Player of the Year last season. He’s staying positive about the challenge ahead though.

“Personally, I think it is a good thing I stayed put,” Mahrez added. “It’s now up to me to prove myself again.”

Arsenal 3-1 Leicester City: By the numbers

Okay so for a moment I thought we had signed him :/

I think the Mahrez signing massively hinged on whether we could find a buying club for Theo; I think this was the situation that Walcott has been referring to as the ‘light bulb moment.’

‘You not for sale … OK boss’ if I remember right.

Yeah definitely, but had we managed to sell Walcott for 25-30M (let’s say), I think we potentially may of moved for Mahrez.

If you gave me the choice now between the two players, irrespective of his start to the season I would still chose Mahrez every time over Theo.

What, people genuinely would rather have Theo Walcott because he’s played ‘okay’ for like 7 league games?

Mahrez won player of the year last year in his first season in the EPL.. Walcott’s never won that in his life

Not necessarily. But your statement also included the wrong point that Arsenal MAY have moved for him IF we were able to sell Theo.

Truth is we did move for him even though Theo was with us. Leicester were not interested in selling. Simple.

That feeling when you scream for your life for the team to sign X, and then wonder if that’s not for the best that the wheels didn’t click.

Similar to Vardy, would have been expensive and wouldn’t have been so good as last season.

Plus Theo has stepped up and we bought well. So not particularly upset.

Agreed about Theo. But i would still very much like Mahrez for the depth and quality he brings. Would be a great addition to have. Him and bellerin in the same flank!

Providing theo maintains his current trajectory then WALCOTT AND BELLERIN ON THE SAME FLANK! Im glad we signed mustafi and im obviously not in a position to rate perez but he also looks a potentially good signing. If it was a choice between a cb AND a striker or one wide player id have gone for the latter.

Exactly I don’t even miss a single moment and lose a sleep
Bought exactly everything we needed
Lucas Perez, a reformed Walcott and a decent defender
Love it.

I reckon Mahrez almost getting signed by Arsenal has something to do with Theo stepping up.

That and Theo now getting the call up to the Euros.

I reckon it’s more of the valuation nothing made and Leicester’s unwillingness to sell.

Maybe something to do with Mahrez’ dip in form also

I hated LANS during our austerity days because it injuries fucking us along with the oil money inflated market.

However Walcott, is a LANS I’m very pleased with 🙂

That was my feeling reading the headline….

Meh!! Water under the bridge. Moving on…..

If n when leicester doesnt qualify for CL this season, European teams will still b coming for Mahrez. Mayb not Real / Barca / Bayern, but most teams in EPL will b in for him n he’ll leave. Unfortunately the boat has left for Vardy, who i think will not make the 2018 National team.

Are the vowels on your keyboard broken?

I’m still curious as to why he followed Sanogo of all people on Twitter.

Where’s Scooby and the gang when you need them?

ramgooner
Reply to  Lord Nicki B

Both hail from Paris.

I’ll tell you what, players come and go, players are linked. Sooner or later said players either use our club as a prestigious compliment in their past or future or they say how wrong they were for leaving. Our club moves on but their conscience never does.

I hope he does alright this season.
Leicester are certainly gonna need him in their scrap with relegation.
Would be terrible a player his calibre plying his trade in The Championship

Surely you have to be aware that if they go down, there will be a wholesale of all the players on high wages.

Never wanted him.
Didn’t want Perez either.
Griezmann should be our top priority if he decides to leave Atletico.
We should also keep an eye on Draxler and Isco.
We won’t though we’ll go with continuity, until 60,000 ppl start kicking off and we decide to pull our finger out on the 29/8/17

I see your yawn and raise you one YAWN!

Sounds like he did want to move to Arsenal but had too much respect for his current club and too tiny a pair of beans to force it. Anyway, as a player I’ve got a lot of time for him and he seems to be saying the right things (at least not the wrong things *ahem* “playing style”). Maybe still one for the future!

He never wanted to come..

Maybe Arsenal was too slow for him as we are for Vardy! Good he stayed where he is: he’ll show that he and Leicester were just a one season mistake.

In that case I’d like Arsenal to have a one season mistake (whatever that means). One premier league in the last 10 years is better than none.

“There was contact with Arsenal. But Leicester wanted to keep me and I was pretty expensive.”

Sounds like we were very much bargaining tool to me. Screw players like this, it’s pretty disrespectful to both clubs involved for them to talk about it in public.

“I was pretty expensive”
Who says that?

That was exactly my first reaction.. only whores talk like that!

Marlene Dietrich would say something like that. And she’d be right.

Did you nearly choke on your coffee this morning?

I think a sneaky January bid for Mahrez would be a very shrewd decision. We are not as well stocked on the wings as people think in my opinion. An injury to Iwobi or Walcott, or of course, the rotation we will need to do, means that we’ll be playing players like Ox or Jeff there – quite a bit less depth than is ideal IMO. Now that Sanchez is the number 1 striker, we can’t class him as an option there. Sure, we have Lucas Perez who can play there too, but again I think seeing situations like this… Read more »

I disagree. The problem of the past couple of seasons was no plan B with respect to Olivier Giroud. If and when he was not firing, the goals tended to dry up completely. Now, he has become the plan B, something that he was supposed to be as mentioned by Arsene Wenger when he first got him. If Walcott and/or Iwobi get injured, sticking Alexis on the left and possibly Perez, Ramsey, Ox, Jeff, even Özil or Santi on the right, seems like quite a lot of depth on the wings for me. There seem to be quite a lot… Read more »

Like Bellerin said… You should have boarded the train when it came. Now sit and wonder what could have been!

Would prefer Mustafi and Lucas to one winger that wasn’t a priority over the summer. And that’s what we got!

Iwobi, Walcott, Alexis, Lucas, Giroud and Welbeck (when he gets fit) We have numbers for all those 3 forward positions. Not forgetting the Ox (hope he can push on this season) and even Akpom too.

if it meant we would not have bought Mustafi, then this is definitely good news.

when our defense is strong its only natural that we will do well given the attacking nature of our game.

If anything, I’m almost more upset about losing Gnabry compared to not getting Mahrez. Just really hoping there’s a cheeky buyback clause in the Gnabry contract.

This is exactly why Wenger is the man in charge and not me! Buying Mahrez at 40m would be the popular decision, but buying Mustafi a super solid defender and Lucas a proven goalscorer without an absurd price was the less popular but right decision. Respect to le Prof. Also, worth mentioning is if those are Mahrez’s exact words, oh boy he has such a down to earth approach. Many others footballers in similar position would be less humble!

U r absolutely right … we had a very good summer overall and in the position our club is now with new stadium and all… I think wenger deserves a contract . I would be pretty bummed if it happens to be his last season with us

He comes across as very polite and loyal.

How do these players minds work? Do they think if someone makes a bid, that it is then up to them to decide if they are going to sign or not? Surely agreeing personal terms works on both sides. If you did not sit down and discuss with Arsenal, who says we would’ve wanted you at the end of the interview?

So far, every game that Mustafi has played in, he has gone to show why he was worth it, and I’m super glad we got him. Yes, if Maharez would have been bought, then certainly it would be at the expense of a midfielder in our team. Thanx Walcott for making the managers decision the right one. Hats off to Mustafi and Walcott

Mahrez would’ve been a very good signing, but Mustafi and Perez are two excellent signings and Walcott seems to have woken up thanks to Arsenal’s interest in other wingers so all in all we did fine. Hope Walcott keeps playing like this though!

If we had got rid of Walcott, and he was doing what he’s been doing for us for some other club, I’d be pretty pissed off.

My knee jerk is to think that we need to improve on Walcott if we’re going to properly compete but I’m enjoying being wrong.

Mahrez wasn’t the answer regardless of other signings/ purse strings.

I would take a motivated theo than any other player in the world in his position. I remember Messi saying he was scared of Theo Walcott.

You realise Messi plays on the right these days?

Would have been good

Leicester are already 10 points behind City

Lucks Perez should start playing sometime. .just to show what’s he got.

We’ll see how long he sticks with Leicester for when they finish mid-table at the end of the season:)