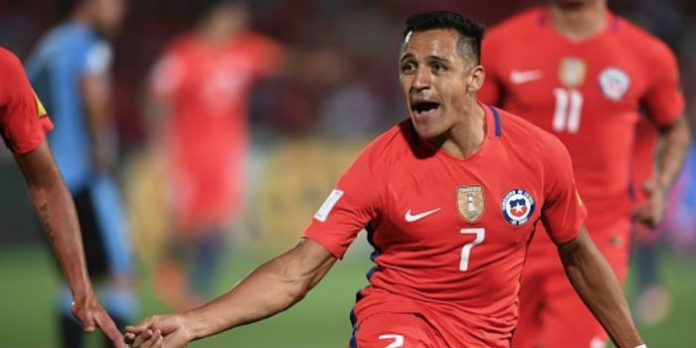 Juan Antonio Pizzi, coach of the Chile national team, says Alexis Sanchez is one of the world’s best players after watching the striker down Uruguay with a clinical second half brace to keep his side’s World Cup qualifications alive.

The Arsenal man, who was recently included on the shortlist for FIFA’s Best Player of the Year award, defied the odds by playing 84 minutes of the 3-1 victory just days after rumours circulated that he’d suffered a serious hamstring problem.

“Individuals speak for themselves,” Pizzi said at full time. “Alexis is among the best players in the world.”

Perhaps understandably, the coach – taking a leaf from Arsene Wenger’s book – also played up the importance of the collective. He added: “I am more in favour of emphasising the strengths of the group. And it is what allowed us to turn the game.

“We value individuality, but I think today the great merit of reversing the outcome is based solely on the collective.

“Everyone understands how to solve things by doing it together. Sometimes a few stand out as Claudio [Bravo], Eduardo [Vargas], Alexis…”

Alexis outlined before the season began how he considers himself on a par with the likes of Lionel Messi and Ronaldo. Having starred in two Copa America triumphs in successive years it’s fair to say his countrymen certainly agree…his next big challenge is persuading Arsene Wenger that he’s fit enough to make the trip to Old Trafford on Saturday.

This is hardly news.

If only we could harness the power of Alexis, we could provide for all the world’s energy needs.

A Different George
Reply to  Pooner

Hand on my heart, I wouldn’t swap him for anyone. And that includes Messi and Ronaldo (given their age) Although Griezman I wouldn’t sniff at! Plus the fact he’s doing such an excellent job at CF, he can play either flank and tbh would be immense at number 10 if required. I think he’s had a massive influence on the team in terms of work rate. If there’s anyone you break the bank for its him and Özil, I just hope our new found ambition is enough to convince him, he’s itching to win the big trophies and he deserves… Read more »

“his next big challenge is persuading Arsene Wenger that he’s fit enough to make the trip to Old Trafford on Saturday.” Im guessing if Mr. Sanchez can walk, he’s fit enough for shovelling some Manure!

He should have added that Alexis is also the Worlds healthiest player.

Goal #1 was a nice turn and shoot move, maybe a little lucky that the keeper didn’t keep it out. But Goal#2, man alive he made the Uruguay defense his personal gimps. If he played for a higher profile national team, that goal would be front page news.
Here’s hoping he has a nice relaxing plane ride in super mega executive class, puts his feet up, reads a book, has a pisco sour or 2. Perfect rest day when you think about it.

Alexis: chilean for ‘getting shit done’ 🙂

I am so proud of my country man love alexis

the conversation between Wenger and Alexis about playing on Saturday: AS: Ho ho hello Boss, I’m just calling to say that I’ll be early to training tomorrow. AW: Alex, my Duracell-bunny, you’re still in South America, and haven’t even boarded the plane yet. Besides, you know, tomorrow is a rest day for you. I want you to stay at home and put your feet up. Relax, maybe have a massage and watch a film… AS: But Boss, I don’t take El plane, I run so fast i can even run on water, so when I get to training I will… Read more »

I bet Alexis love putting away two while the man who replaced him at Barcelona, Luis Suarez spent the game looking comatose. There is no way Suarez is better.

Legend. Perhaps Pizzi was playing mind games with the opposition and Alexis wasn’t injured at all.