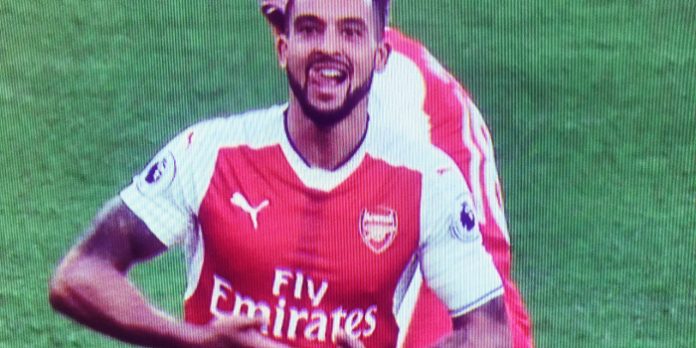 Arsenal created four big chances today against Bournemouth and scored three bringing Arsenal’s Big Chance conversion on the season to a healthy 55%. Last season Arsenal created more Big Chances than any other team (97) but only converted them at a humble rate of 38%. This season, Arsenal are still creating Big Chances at a good clip of 2.23 per game (last season was 2.55 per game) but the big difference is, of course, conversion.

Big Chances are best defined by the four chances we saw today; Alexis picking the ball off and rounding the keeper, Walcott nodding home a header from inside the six, Giroud’s miss from just in front of goal, and Alexis finishing off Giroud’s great drag back for the easy goal. In short, these are shots we expect the players to score.

Now before you get all “that’s too subjective for me”, all football stats are subjective. A human watches the game and categorizes events based on a set of definitions. Assists are a stat we all like to take as pretty solid but they are notoriously subjective, so much so that we have settled on a definition that basically any last pass before a goal counts as an assist, whether the passer intended to make the pass or not. I’m sure you can think of a number of instances where Walcott made a cross-cum-shot which was scored. Sometimes he gets an assist for those, sometimes not, but a human makes the call: it’s subjective. Big Chances are similar because the human has to say “oh he should have scored that” but I’ve almost never disagreed when they are counted and accept a certain amount of uncertainty baked in to the stat.

Big Chances are an important metric for me because even though the definition is a bit squishy they reflect what fans think of when they call someone a “good finisher” or when we think of our team having a profligate game. When Fernando Torres moved from Liverpool to Chelsea he was considered a good finisher. But when he started missing easy chances, which is subjective, his “finishing value” dropped. So, Big Chances are a good way of discussing how well we think the team/player is finishing.

Big Chances also account for most of a team’s goals. Last season Arsenal scored 63 goals, 37 of them were Big Chances. Remember that was a large return on a pretty poor finishing rate for a top club. If Arsenal had finished last season’s Big Chances at the rate they are this season, they would have added 16 goals to their tally and won the League at a trot. Even if Arsenal could have raised their rate of finishing to the average for big teams last year (43%) it would have been an extra 4 goals to the bottom line.

This season, both Walcott and Özil are 50% (5/10 and 2/4 respectively) and that is the difference. Specifically, Walcott is the difference. Walcott gets into great positions and this has always been Walcott’s strength, but his finishing this year is on point. Arsenal need a healthy Walcott, getting great shots and finishing them if they have any hope of winning the League.

Interestingly, Sanchez is finishing 57% of his Big Chances this year, with 4/7, but that includes 2 missed penalties. He’s actually 4/5 finishing Big Chances from open play. I expect that number to drop as the season goes on. Either that or for him to win the Golden Boot and celebrate the achievement with a 300 mile run with his dogs.

This game… specifically, this first half. UGH. Bournemouth did that high tempo thing that Spurs did against Chelsea and which football fans love to see. But Arsenal responded in the second half with some high tempo football of their own in the second half. The best way I can express that is like this:

Sources: Whoscored.com, my personal database, Flea the bassist from Red Hot Chili Peppers, a pile of cutting boards piled by my nightstand

I love how late that this article is always posted!

Lovely Stats! Can you please share some insights on THE November Month?

I think our poor performance in the first half could be attributed to the instability caused by debuchy going off injured. We went off the pace badly, but recovered some semblance of control and thus the better performance in the second half.
A great performance from the team.
Good work @7amkickoff. Bless your efforts. It’s 5.58 am here and it says this was posted 30 ish minutes ago. Someone must have lost sleep.
You should get some zzzzz’s.

7amkickoff lives on the US west coast. That’s why this article was “late” for those of us living in Europe…and Britain.

Comparison of stats of both halves shows the game to be pretty even in both halves with one exception: no of shots for both teams in each half which suggests Arsene told them to be more solid defensively at half time I take? And credit to Theo as well. All of us in the summer wanted a goal scoring winger as we needed extra goals. Theo has stepped up and provided and also worked exceptionally hard. Also can someone provide a link when welbeck laughs at Jack? I watched the match but missed that part unfortunately

Thank you, this is great and can you guys see Jack smiling under the cap? Jack Wilshere – Gooner for Life

I know this isn’t Arsenal related, but can you please do a stat on how many times Moanrinho has been sent to the stands. So we can laugh at the proud one.

Or a stat on how many times Mourinho has to insist he is the better manager than Arsene Wenger every time he accumulates a disappointing result even though Wenger has nothing to do with it and sits 8 points ontop of hi s abysmal Manchester United team.

Mourinho referenced Wenger during his official United unveiling. That’s how obsessed he is. He will never stop talking about Wenger.

Well chaps another nice win for arsenal fc v the cherries back to top four. It is an interesting top four group, it is gd to see arsenal fc team doing well and can be better seeing these stats in certain play.

Why do I hate mourinho so much? I mean apart from the fact that he’s a dirty [email protected] ?

RHCP for life, after arsenal

Liked the look of us yesterday. We lost some momentum with the injury to Debuchy and their penalty but the setup looked good. Bournemouth caused a lot of problems for example for City. Xhaka and especially Elneny looked solid. Talk about squad depth. Ozil has looked a bit off in the last 3 matches, maybe targeted by opponents, was more involved from the wing in the end. Maybe something we could try in some matches, a fluid front three with Ozil, Alexis, Walcott/Lucas with a midfield with 3 CM?

Özil was involved in our last 2 goals… Thats enough. I guess we need Giroud after all. Hes so much like a goal when he comes on and i like the fear he brings in with him. Who said ‘zlatan’

Anyone know the distance Elneny covered during the 90 minutes? He didn’t stop running all game, must have the worlds biggest lungs!