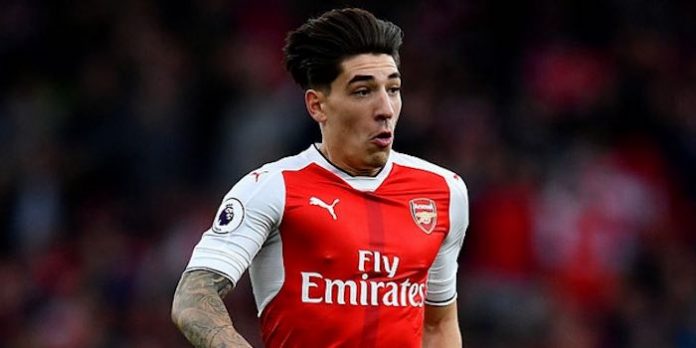 Hector Bellerin says he’s in no rush to extend his Arsenal contract, which still has three years left to run, but also that he’s happy at Arsenal and isn’t thinking about anything other than achieving things with the Gunners.

The Spanish international has been repeatedly linked with a move back to his home-town club of Barcelona, and there was keen interest from Man City during the summer which Arsenal knocked back in no uncertain terms.

But speaking at a Call of Duty launch last night (Hector is a massive gamer), he said of the Catalan giants, “If I wanted to play there I would have stayed there.

“I was very happy when Arsenal showed interest in me and I decided to come here. I’m not looking back, I’m just looking to help Arsenal.

“It’s nice for a player to know that big teams want you but I’m very happy here. I’ve still got three years left on my contract so I’m just focused on playing every single week, improving and hopefully making things happen here at Arsenal.

“I’m not in a rush to extend the contract. I’m happy. I’m comfortable. I want to be here a long time.”

And ahead of the North London derby, there’s no lack of understanding as to how important a game it is for the club and the fans.

“You don’t need to be told,” he said. “You just know. It’s like a rule you just learn when you come into the club and you can see when you interact with fans how important it is to them.

“Even though you haven’t been in the country a long time, even the new players like Granit and Lucas know how important it is for the whole club to win the game.

“We know it’s going to be hard but we have a team of winners and we’re going to do our best.”

Listen to today’s Arsecast, Ozil’s goal, the NLD and more

Hector certainly feels the Call of Duty to the Gunners.

THE FEELING IS SO FUCKING MUTUAL!

All he said was “Fuck off Barca” but in a nicer way.

“If I wanted to play there I would have stayed there.” Get rekt!

Sounds good. He could become one of the best RB:s in the world if he continues to develop. He has a big part in wenger’s system as a reall offensive RB/ almost a wing back and I don’t think he would get as big a role for example in Barca. Hope he stays forever but he is so young he could easily play 5 more years here and then make a switch to another club when still in his prime.

He can also stay at The Arsenal when he is in his prime, that is a better idea

Quick question, who is better than Bellerin at RB at the moment? In EPL, none. In Seria A, none. In Ligue 1, none, La Liga? . . . Just a matter of a year or two… That makes him the best in the world IMO

Lol was just stating a fact, really hope he has a long arsenal career.

Lassana, is that you? What I like about Hector is the fact that he pledges his future to the club without any if, but or maybe’s. It is refreshing to hear an exciting, young player speak about his future without fishing for a bigger paycheck or move to another club. Really seems like an honest, modest and level-headed guy. I’m not surprised Debuchy gave up so easily on retaining his spot in the first team. Hector and Jenks fighting for the same spot and both being so driven and focused on becoming better surely promises a bright future for us… Read more »

We want to love you long time too Hector

6 years ago articles like this gave me a sickly feeling due to the inevitability of the player in questions leaving, now, im still scared (im a football fan after all) but scared like you are of global warming not scared like when your significant other tells you ‘we need to talk’.

A long time is not forever. Hence, expect headlines in the newspapers tomorrow:

Bellerin says he won’t be at Arsenal forever as Barca, Man City and Chelsea lurk

I was watching Chris Kamara, bizarrely, commentating over the live stream of the Call of Duty event. He mentioned that when he talked to Hector, he said that he was “Arsenal through and through”, and asked “Who is Barça?”

You just have to listen to how the guy talks. He’s a Londoner and a proper lad. Think he loves the club as well. Long live Prince Hector!

I’m Arsenal wants Bellerin to be there a long time too. For what it’s worth, I do.

Cole, Cesc, RVP. I’ve been hurt before. He’ll be gone in two years.

I see you’re a glass half full fellow. Good man.

I bet you’re a lot of fun at parties.

As a Gooner who has seen top players leave the club on too many occasions, I’ll take this with a pinch of salt.

But either way, sod off Barca twats.

Graham
Reply to  Lord Nicki B

And we’ve survived bigger players leaving so what ever happens, we’ll be fine! ?

*provided that it happens under the supervision of the best manager in the world.

It’s my first match attendance and I’ll be watching Hector with high hopes. Hope we put on a great game.

The best news since man utd began being roasted like beans

I moved to Spain a couple of months ago and one thing that I think is fantastic for Arsenal is all my Barcelona supporting friends have been absolutely raving about a guy called Sergi Roberto who is also a La Masia graduate who has apparently been brilliant since he switched to RB for them. He’s 24 which should mean that if he stays in form Barcelona will never have a need to come chasing our Héctor, so we will never even need to test his loyalty!

Sammy and Pat move it into attack

We’ve got Hector. That is all.

This interview could be better only if he said:
“It’s nice for a player to know that big teams want you but ARSENAL IS A BIG CLUB AS WELL, AND I’m very happy here.”

Plus with Guardiola there. All we need to do is win the league and show we are a top top team then we won’t have to fear player exodus

Stick that where the sun don’t shine Barca!