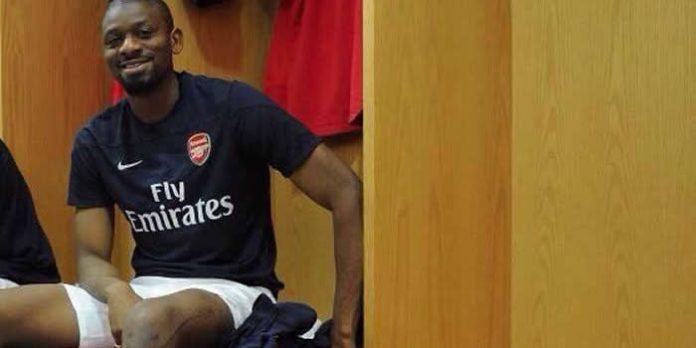 Despite injury problems that would have beaten most players, Abou Diaby says he feels lucky that he’s still involved in football.

The former Arsenal man moved to Marseilles last summer, but has made just five appearances for the Ligue 1 side because of his ongoing, relentless fitness issues.

However, in an interview with France Football, he says he feels fortunate that his career wasn’t completely ended like some of his peers.

“I have been enormously lucky,” he said. “Because at the age of 19, everything could have ended there. Today, at the age of 30, I feel lucky.

“I often look at examples of players who have had to end their careers as a result of injuries.”

Asked who he was referring to, he continued, “Dean Ashton. I saw his interview live when he was saying that at the age of 26 he ended his career as a result of an ankle injury.

“I also think about Fabrice Muamba. He half died on the pitch. Today, for his health, it is better that he stopped. But if he could make it back on the pitch, he would have done it. Look at Abidal! He is strong!

“I also see Djibril Cissé who, recently, still wanted to come back. For me, they are examples.”

It’s an outlook not many would expect, given how his career was basically ruined by injuries all stemming from that horrendous Dan Smith challenge, but the rest of the interview gives you an insight into his character and why he thinks that way.

Check out the full translation over on GFFN.

Report: Gazidis wants Wenger and Grimandi at the San Siro

This guy is such a fighter, and any footballer could learn from his attitude and will to just play football. Lot of respect for him.

And yet people, so-called “fans” in fact, used to give him such a hard time. What a player he is and his character is just exemplary. Good luck with the rest of your career, Abou!

When he was fit and on form he was awesome, should have been an Arsenal legend, such a waste….
Good luck Abou, hope you get a few games in before you hang up those boots!

He is already a legend in a way.

Don’t wanna sound harsh on him, but maybe it could have been better for him if his career ended somewhere in those long years. I always liked him while he played for us, at a certain point he was even my favourite youngsters, and andored (still do!) his relentlessness to come back again and again from yet another injuries; but at around the age of 30 and with only a few dozen appearences in the past several years combined I am really wondering whether he could have used the best years of his life on something more than chasing a… Read more »

However you have succeeded in sounding very harsh on him. Why would you give up on something you’re extremely good at when there’s still hope? He’s still managed 200 or so appearances in 13 seasons, playing some really good stuff at times, at the highest level. Most kids would bite your arm off for just the merest sniff of such a career. Good luck Abou.

That is an exceptionally mean-spirited and classless post – exactly the opposite of Abou Diaby’s attitude throughout his career. You should be ashamed.

We can all learn something from this. Diaby deserves more than his body will allow, but he remains optimistic despite all setbacks. A remarkable man.

And Dan Smith is lucky to get a game for his local pub side.

Anyone remember that Away performance at Aston Villa. Even after his injury he showed glimpses of world-class’ness. I’m happy wenger paid him out for a decade, true gooner.

Great show that day. Also remember Liverpool away a few years ago on the opening day of the season. He absolutely mauled their midfield

Also I think, lucky to be at a club like arsenal. Don’t think another top club would hang on to him for so long, maybe a smaller club would, but not with that salary.

Wow. What a guy. Hats off, Abou. I wish this guy the best for the future.

Who could possibly hate on this guy?

To Arsenal fans and sane human beings around the world, a career highlight reel that involves kicking John Terry in the face will always be considered successful.

That aside, he’s been a fighter of top top quality to comeback from all those injuries. His absence hurt us like it or not. There’s a reason this man could walk into the France team when fit.

Hate to constantly bring this back to refs, but schucks. The game against Sunderland was building up to this, the tackles were flying in. We were gonna either be stretched off or red carded for retaliation. The media and old red nose saying “southern softies don’t like it up’em” & “get in their faces”! I remember savage trying to two foot Cesc from behind having just come on in a Blackburn game. Reyes and Ramsey got lucky.
Diaby & Eduardo not so. Sigh

Such a humble guy. Met him at my physiotherapist on Harley Street this week. Wish he could have had a more prosperous career with us

That day we beat Liverpool 2-0 at Anfield. What a display from him. Absolutely amazing. Good luck, Abou!

The game away at Liverpool in 2012, where he bossed the midfield, sticks to the mind the most.

I will always have a soft spot in my heart for Abou Diaby, truly one of the most humble, dedicated, and classy gentlemen on the planet. Best wishes, Abou!

I’m glad people recall that Liverpool game on the opening day of the season. There’s a piece of skill he did while surrounded by Suarez, sterling, Lucas and some other liverfool which was outta this world. There’s his towering header against Liverpool during a snowing match played at night. Even that game he scored an own goal against manutd years back he’d completely bossed it. There were games irrespective of the opposition be it Barça or Aston villa where he bossed that midfield and forced opponents into submission mixing powers and skill with such ease. We were truly robbed by… Read more »