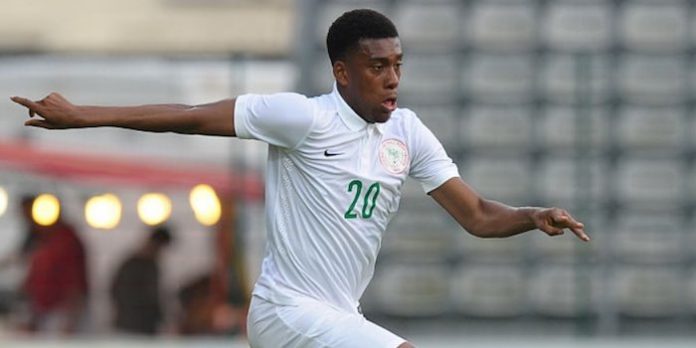 Alex Iwobi says the popularity of Arsenal in Nigeria is such that when he made his debut against Egypt, fans just shouted the name of the club at him.

The 20 year old chose Nigeria over England having been overlooked at youth level by the FA for a number of years, and is now establishing himself as a regular on the international stage.

He reflected on his debut, saying, “When I got to come on against Egypt, I saw love they have for the game.

“It’s amazing the support they have for the club. They’re all very passionate for football and their favourite league is definitely the Premier League.”

And he’s hailed his uncle, JayJay Okocha, for being a positive influence on his career thus far.

“He was a big figure in Africa, as well in Nigeria,” he said. “He’s always been my idol. He doesn’t only help me on the pitch, he also helps me off the pitch, which is a key thing for me.”

Iwobi has made 12 appearances for the Gunners this season, and although he’s yet to get off the goalscoring mark, he has 3 assists to his name.

Over here in Nigeria, Arsenal is very big. I believe the club knows Nigerias has a big fanbase as well. Kudos Iwobi, hope to see you do it again againt Mahrez and Slimani’s Algeria this month. COYG.

is this because of Kanu or does it go back longer?

Hello from Canada. Arsenal are getting bigger here because of their style of play, but still too many Man U fans!

The Arsenal Canada group and the various local chapters are definitely getting bigger. Vancouver Arsenal frequently get over 100 people out to a match at 7:00 in the morning, which is considerably more than any of the other supporters groups get at their pubs. In fact, the support in Vancouver is now good enough that our pub even opens for the 4:00 am kick-offs!

Lol @ English FA… should have taken a punt and capped him when he was still young!

As a Nigerian gunner myself, I am proud to say that I have been watching and supporting Arsenal since 1999 along with many other Nigerians.

If you understand the style of football loved by Nigerians then you’ll understand why Arsenal are so huge. Nigerians cheer a good pass, dribble or skill like a goal.
Nigerians love ‘playing football the Arsenal way’.
49, 49 undefeated…

Nigeria used to impress with powerful long range shots into top corners, after a few dribbles of course. Their style used to differ from Arsenal in that. I steal remember Jay Jay’s first goal for PSG to date, Sunday Oliseh, Daniel Amokachi and their long range shots. Nigeria is fairly weak now and has also lost their style due to international football.

Nigeria is re-emerging at the moment and I believe they have the talent to take hold of the continent likeIvory Coast did while fairing better in African cup and World Cup. Consider our very own Iwobi alone, then add from the PL alone- Iheanacho, Victor Moses, Ahmed Musa, Mikel can still put in an experienced shift for them, Ighalo as well and that makes quite a good attack. Defence and the rest we’ll have to see but I think they have some good unsung stars. Then their kids just won the under 17 world cup as well so maybe 4-5… Read more »

Arsenal have a huge huge fan base here in continental Africa. You will hear of stories of Africans like some in my city Nairobi hanging themselves when we loose against one of our rivals. Not the brightest thing to do, i concede, but that gives you the level of passion we have for the club. We love The Arsenal.

Have seen on TV some bad guys in Africa come to court in Arsenal jersey too, lol. Not sure, I am proud of those. There is lot of money, Arsenal can make there as a middle class develops in the future.

The truth is that most of the so called United and Chelsea fans in Nigeria were once all Arsenal followers. Kanu made Arsenal very popular in Africa. He’s one of the reasons I became a gooner. Some of the followers left to join United and Chelsea when PL became popular in Africa. I wouldn’t call them fans because they weren’t addicted to the club back then but I believe by now they now know where they belong. I know most people say that gooners in diasporas are not real fans but trust me, they also invest their time, money and… Read more »

Arsenal are really big here too. In my heart.

*Relax relax let me at least get my coat

Comment: Gunners really big here in Zimbabwe, proud to say been a Gooner since the Ian Wright years.