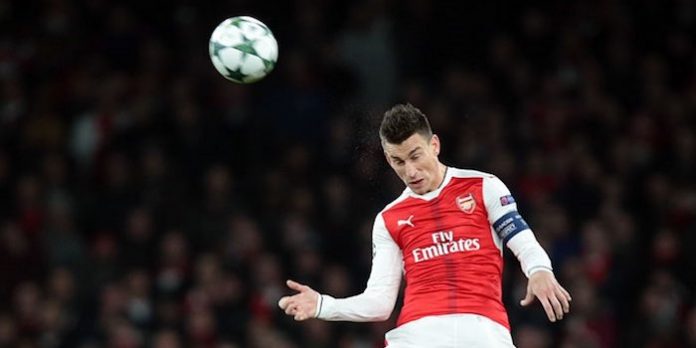 Laurent Koscielny says PSG’s second goal saw Arsenal take their foot off the pedal and stop pressing the French champions in the 2-2 draw.

Alex Iwobi’s own goal brought the scores level on the night, and the skipper says a drop in defensive intensity came about because of that.

“We were able to create danger in their own half so it was better for us to press high,” he said, “but after the second goal we stopped pressing and dropped a little bit.

It means our chances of finishing top of the group are now out of our hands, but Koscielny was open-minded about it.

“We have a lot of big teams in this competition now and a lot of great teams finish second, so it’s difficult to know,” he continued.

“They have a game against Ludogorets and we are playing Basel, so we will see. We want to finish first because then our second leg will be at home, so we want to win our last game to give us the best chance of finishing first.”

Could someone explain me why when Ramsey is on, the team plays badly? Many accuse Özil, but why is he less good now than before? Cazorla? Yes, we all love the lil magician, but if we rely on one player, we’re crap ! Someone (Xhaka?) needs to step up to take his place and play with Mesut! Ramsey wants to both Santi and Mesut at the same time, acting like a vampyre on the pitch and slowing down the pace. He was even booed by the crowd during the game when after a great forward action from Mesut, he gave… Read more »

God, this is getting boring.

I think this raises the interesting question “why the fuck did you do that then?” something I’ve asked myself many many times

wake me up when the hate is over………….That being typed, I don’t think the explosive handsomeness of Giroud’s beard is mentioned enough.

Not sure how Ozil, Sanchez, Giroud and Mustafi’s poor performances were somehow down to Ramsey. Ramsey himself actually played well, so maybe you should direct your ire to the players around him

So Sanchez can’t make a simple pass because we play Ramsey in midfield? And Ozil disappears in a bigger, more physical game (as he has done before) because of Ramsey? Thought Ramsey was actually pretty good in this match (was expecting him to be much worse). There are a lot of other reasons we are in a minor slump than Ramsey, for example that we are playing against bigger teams who usually try to play really physically against us, that’s when Ozil usually suffers.

While Santi would put someone through Ramsey would love to be put through! That’s the telling difference. All the positions Ramsey ends up taking are generally good positions to score from but tough positions to pass into. Santi is always available as an out to Ozil and Sanchez while Ramsey is the final ball. Having said that the players around him have played with him long enough to be able to understand this so it is not his fault if everyone expects him to be Santi lite. He did his job well yesterday, he showed his position is in the… Read more »

I agree with you about Ramsey problem. I don’t know why Wenger always play him whenever he is available, and he always plays badly. He can’t play a long ball, don’t have the final pass to make an assist. The only thing he can do is short pass to his closest teammates to delay the speed of the team.

Same old.. Same old.. I am just sad by the fact that we are not even creating chances at home and teams have been dominating us at home… The unbeaten run is hiding so many deficiencies…

Why not
Reply to  Goongot

It is however, Still unbeaten. The fact we and the team are disappointed by this pleases me, and is a sign that the deficiencies are not hidden at all. Yet we still have not lost for 18 games.

D
Reply to  Why not

But to say we are unbeaten, implies that we have been solid and ground out results, not had a battering by PSG and 2 matches against Manure and Sp*rs where we had no control of the game. They say results matter and they do, but footballing performances are much more important and we haven’t had one for over a month now.

Why do we never get a home advantage with referees? Some shocking decisions last night. We played shit, apart from the 20 minutes in the second half, so no excuses and didn’t deserve a win. But the ref was shocking.

Why not
Reply to  Miguel Huntos

The paradox is killing me.

Interesting comment from Wenger that there are times when you don’t win as much. Yes Arsene, its when we play shit. It also typically comes at the same times when we draw and lose more…

I’ve been a big critic of Ramsey these past couple of seasons. But reflecting on last night’s performance (free from the frustration of the immediate aftermath), fuck it, I really liked what I saw from him. He’ll never do what Santi does for us, but in terms of his closing down and his ability to make things happen he was one of the few bright spots in a pretty dire performance. Put him next to a midfield controller like Xhaka (yep, still hoping) and it will offset the more frustrating parts of his game. I can’t defend the decision to… Read more »

2 shots on target in the last two games. At least it’s 100% conversion rate.

Can someone please explain why we’re creating so little despite having the best no.10 in the world?

Are we just not playing well or is it something more?

Or teams defend Ozil out of the game? Our pressing is and has been horribly lazy in he last few games too.

It’s not just laziness, though that’s a big factor. It’s a lack of coordination, just like the first game of the season against Liverpool. You can see it from the pained expressions on Ozil and Sanchez’ faces when they’re waving people to press. It’s clearly something we’ve worked on in training but we haven’t been able to make it stick since the Chelsea game, a lot like Man Utd at home last year

I think any comparison to the Liverpool match is misplaced. Chambers and Holding (top division debut) at centre-half, no Ozil, Sanchez, Giroud.

Because Alexis is our best striker by a mile and he’s knackered. If we’re going with Giroud up front, fine, but then rest Alexis, bench him. If you’re going to play Alexis at all, just play him central. What other team in world football goes ‘hmmm, our star striker could do with a rest, but it’s a big game, a big chance to top the group, so let’s risk it. But we’ll play him out of position. On the left where he started? No, REALLY out of position on the right where he never plays for us.’

the only thing clear for me is that we don’t create combinations in the final third any more. they all got cut out before they generate any cutting edge. this is most likely not a personnel problem, more a fitness problem. i think we should be thankful that the team is getting points without getting new injuries. that should be a huge positive going forward.

The way Arsenal play and I think the major reason fans enjoy the style is that the combination play is good. An attractive passing style. You can’t have everything at the same time. It takes time to generate the understanding and finding the right partnerships. Particularly midfield. It takes time for some partnerships to blossom and some take a very short time. People can’t be expecting our players to instantly gel every week. And we have to bear in mind injuries and energy levels affect the selections. The interruptions to the forming of partnerships can be detrimental and will take… Read more »

To me there was a huge difference in our energy on offense and defense with Giroud leading the line vs Sanchez. We are so much more fluid on the attack and active on defense high up the pitch, but all of that fades when Giroud starts. I don’t know Wenger didn’t stick to the forumla of bringing on Giroud when the defense is getting a bit tired as he has lately and scored a number of goals. To me it seems when he starts we just play so much slower. I am not a Giroud hater and know he certainly… Read more »

Agree for the most part but it’s fair to say that having a mobile forward isn’t enough either. For instance, the game last weekend…

As soon as we scored the goal, we sat back and I knew they were goingto score. My question is why the gaffer had to wait sooo long to change things around. YOU could tell there was a drop in out put. I thought Ramsey was OK (and better in this position) but his out put dropped after the second goal. I would have hauled him off, traded his offensive potential for Granit. Why are we not playing Granit? I would also have injected a bit of verve with the Ox to harry them a little, help Jenkinson. PSG were… Read more »

Surely one has to start ‘pressing’ before we stop it. I was there all night Laurent and don’t recall seeing any. Let’s try it again in December please.