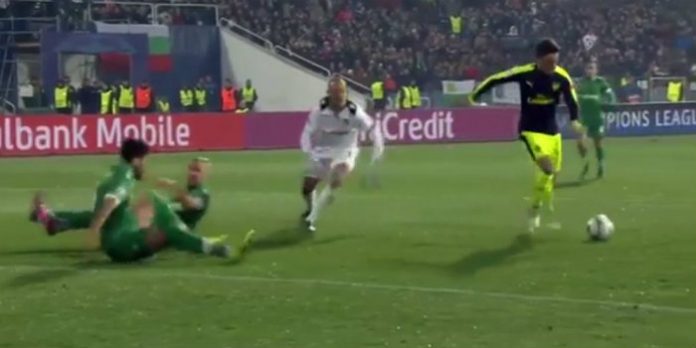 3 – Big chances created by Ludogorets and Arsenal (each).

The two Arsenal keepers have been playing very well so far this season but as with all keeper stats it’s hard to quantify how well. Both have flaws but what sets them apart is that they have a tendency to come up big against high percentage shots. For example, big chances, fast breaks, and shots in prime. In this game, Arsenal allowed three big chances, one fast break shot, and four shots in prime. Ospina saved just one big chance (the diving save at Wanderson’s feet) but he saved a shot from a fast break/counter.

Fast breaks are a new stat that I’m looking in to. I was triggered into looking at this stat when Leicester won the League last season and did so off the crazy goal-scoring exploits of Jamie Vardy. Then, when Wenger went after Vardy (and when Vardy decided to end his vareer in Leicester, Wenger went after Perez) I looked at the numbers and was surprised by his conversion rate of this type of shot, which was 50% from counters last season. Big chances are converted at a 40% rate (bulk, not just shots on target), and shots in prime at about a 24% rate. So, whenever a keeper can save a Big Chance, a counter attack shot, or a shot in prime, they are doing a great job.

Ospina has a much smaller sample (I only see Champions League v. Premier League data) but so far Ospina is only saving 50% of the Big Chances he’s faced (3/6) and just 40% of the Shots in Prime. Cech is slightly better in Big Chances with 53% (7/13) but hugely better in shots in prime with 66%.

One thing that is worrying me is that Arsenal seem to be conceding a lot of shots in great areas this season compared to last. This is something I wrote about last week and I need to reiterate it again because I think it shows a fragility in Arsenal’s defence that a lot of folks aren’t seeing (there is overlap between big chances and shots in prime, e.g. most big chances are shots in prime).

What this shows me is that Arsenal’s defense is too loose. We are conceding too many shots in good areas this season, roughly the same number as we have taken, and this puts too much pressure on the keepers and ultimately on the attackers to keep the games close. Last night against Ludogorets, Arsenal needed both: they needed Ospina to make two key saves and for Arsenal to create 3 big chances. You can’t expect to see goals like Özil’s winner every week.

512 – Passes by Arsenal
76 – Passes by Mustafi (led all players)
66 – Passes by Koscielny (second among all players)
34 – Passes by Jenkinson
24 – Number of Jenkinson’s passes which were backward (led all players)
17 – Number of Jenkinson’s passes which were to Mustafi
8 – Number of completed forward passes by Jenkinson (of 12)
38 – Passes by Gibbs
13 – Number of Gibbs passes that were backward
12 – Number of completed forward passes by Gibbs (of 16)
9 – Ball recoveries by Gibbs (led Arsenal)
4 – Clearances by Gibbs (led Arsenal, Jenkinson was 3/3)
3 – Aerial clearances by Gibbs (led all players, Jenkinson was 2/2)
1 – Aerial duels won by Gibbs (led Arsenal, tied with Jenkinson, both players were 1/2)
1 – Slip that is the only stat people will remember. This actually wasn’t scored as an error but rather as a failed tackle. If you watch the slow mo replay that’s what he attempted. He ended the match 2/4 on tackles.
3 – Tackles by Jenkinson (of 4 attempted, led Arsenal)
6 – Fouls committed by Jenkinson (led all players)
4 – Fouls committed by Xhaka
4 – Fouls committed by Xhaka that could have been yellow cards
1 – Key pass by Xhaka that should have won the game but for Alexis’ poor touch
18 – Final third passes by Ramsey (led all players)
69 – Percent of final third passes completed by Aaron Ramsey (18/26)
0 – Key passes by Ramsey
17 – Final third passes completed by each of Alexis (17/22, 77%), Özil (17/21, 81%), and Coquelin (17/18, 94%)
1 – Key pass by either of Alexis or Coquelin, and I bet you didn’t guess it was Coquelin who made that pass
4 – Key passes by Özil against Ludogorets (led all players)
4 – Champions League goals scored by Özil this season: the most in a season by Özil for any team he’s played with, all four scored against the Bulgarian side Ludogorets
5 – Goals scored by Özil in his last 5 appearances
3 – Assists by Özil in his last 5 appearances
9 – Goals scored or assists by Özil’s in his last 8 appearances for Arsenal
3 – Ludogorets defenders left on their asses for Özil’s goal
4 – Passes made by Mo Elneny
1 – Chances created by Elneny (Through Ball, Big Chance, Assist)

Someone requested Alexis’ touch map, here it is!

Sources: Whoscored.com (for the touch map), the 442 stats zone app, my personal database, outer space (for Özil, this is where he is from).

Does any1 else think that xhaka is an perfect replacement for cazorla in the long run??

No – both completely different players.

No. Jack Wilshere is the perfect replacement for Santi in the long term. But it seems unlikely at the moment because Jack seems to have grown impatient because of the constant unfortunate injuries.
I hope that he realises that he could still have a stellar career at Arsenal – although he might need to be patient for that and wait for his chance to take his place in the side.

please stop insulting Cazorla, and my intelligence. Wilshere is short, that is all he shares with Cazorla. He lacks the game sense, the two footedness, and the selflessness, and the skill to pass long and short – all that Cazorla has. STFU. Nothing personal, I am tired of this comparison and it makes me feel people are blind. or stupid. or both.
Wilshere is a wonderful player. He’s no Cazorla.

Is there anyone actually out there (or internally) that is capable of filling santis tiny shoes?
Closest internal is Elneny but even he lacks the two footedness and generally the range of pass

Was always big on Gundogan, who was the man that made Klopp’s best version of Dortmund tick. And when scouting Xhaka last season it was impossible to miss his CM partner Dahoud. There’s always talented young guys coming out of Brazil too, such as Thiago Maia, and i think this squad needs a non-defensive Brazilian.

To be honest I don’t think we can replace the mature version of Santi we’ve seen for the last couple of years. He’s a gem.

How is a cross leading to a big chance and an assist not also counted as a Key Pass?

Key passes are passes that lead to shots but not goals, those passes are classified as assists. Key passes + assists = chances created. Yes this is stupid and needlessly confusing. Blame Opta, they’re the one who made up these definitions. While I’m talking about Opta and their stupid definitions, a tackle “won” or “lost” isn’t what most people would think either. Here are the definitions they use for “won” and “lost” tackles: “A tackle is defined as where a player connects with the ball in ground challenge where he successfully takes the ball away from the man in possession.… Read more »

Even when we went 2-0 down, I still felt we could win this game. Such a change from previous seasons when it would be hard for us to recover from that! I know the terms’character’ and ‘mental strength’ are used far to often but we certainly do have that this season.

Alexis made 3 key passes and Özil was very poor in front of goal except for the fucking good, amazing & espectacular goal he made at almost the end of the game. Just saying ~

Is an assist not a pass? I don’t understand how Ramsey’s assist is not a key pass. Xhaka man, you need to cool down on the flying tackles a little. I remember when we were down in the match at a point and Özil was yelling at his teammates to push higher. He was really motivated for this one! Great character from the team and Giroud did great to make that tackle that led to the winner!

Probably the quality of the chances we have conceded so far is correlated to how much more front-footed our game has become? The more front-footed you are the better the quality of chances you create and probably the better chances you concede. I think we all look at Barca or Bayern and say that they don’t concede as many chances but the level of control those teams have is crazy. I think we are more in the mould of a high pressing team like Dortmund/Leverkusen/Monchengladbach. Scintillating football but with limited cohesion to win the ball back. I know that the… Read more »

Would the pass from Alexis to Özil for the Xhaka goal be a key pass, it did unlock the defence haha

I don’t know about you Tim, but I think there is a slight issue with our Central defense, particularly with Mustafi. I mean I’m not trying to be prick here but I’ve noticed his tendency to overcommit where he gets drawn towards a player high up the pitch, a problem that Vermaelen had. On Numerous occasions, he goes forward to make a tackle too aggressively and ends up leaving a gap behind behind. I think Koscielnly has taken the role of the sweeper now while Mustafi plays the role of the aggressor. When Kos and Per were paired, Per would… Read more »

It’s almost as if scoring more goals with more fluidity has come at a price of being more open.

Not related to the article but the Spuds just lost so…haha.

A Sp*rs loss is always related here, my friend.

Coquelin making 17 passes in the final third and Arsenal conceding big chances are consequences of each other. Our defensive Midfielder is not defending. It reminds me of Song! The defensive midfielder who was instructed by the coach not to defend. After playing well defensively for 2 seasons, Arsene has gone back to his old suicidal gung-ho all attacking game. We give up counter attacks by the millions. We were lucky in Paris but better teams are going to punish us!