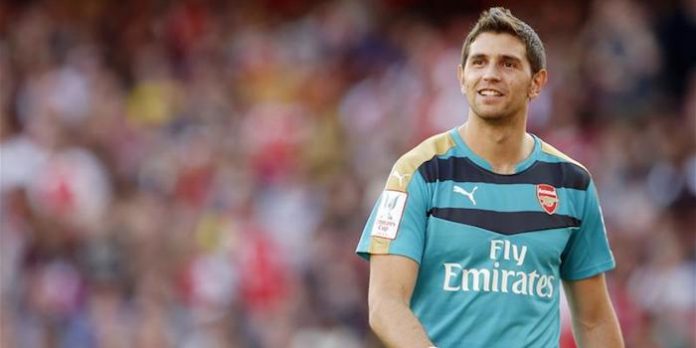 Emi Martinez says that Alexis Sanchez loves dogs so much that he keeps asking when his dogs, Atom and Humber, will be allowed breed with the Argentine keeper’s.

Sanchez clearly wants more puppies in his life, which is a completely normal thing of course, and he’s got his eye on Martinez’s female labrador as a possible mate for one of his famous chaps.

Speaking to the Arsenal programme, the 24 year old revealed that Alexis is always question about when they might organise some sweet, sweet loving.

“His labradors are both male, and mine is a female,” he said. “So he’s always asking when they’re going to breed because he wants more dogs.

“I tell him that mine is too young and to give her another year!”

More dogs, we approve 100%. And the more dogs he has, the more difficult it is for him to move house or to another country so he might as well sign a new deal because it’s just less hassle.

Arsenal, of course, have a great history of dogs and players going together. Who can forget the likes of:

And many more, no doubt, but we’ll leave that to you lot in the comments.

Thought for sure it would’ve been Shkodran Mastiffi

I thought of that but then when you say it out loud you have to say ‘stiffy’ and the juvenile part of me laughed and this is, of course, very serious business

I'm only making plans for Nigel
Reply to  arseblog

arseblog
Author
Reply to  I'm only making plans for Nigel

Brilliant Martinez! As part of his contract renewal we should offer Sanchez the chance to mate his dogs with martinez’

Shkodran Mustaffy? Staffs are my fans so they go together…

Still missing a trick! You can go even further and go for Shdogran Mastiffi!

I think Emi’s dog will need at least 2 years before she’s ready unfortunately, better sign a new contract to stay around till then!

If we get him a Leonbergkamp he won’t be able to travel at all.

If Alexis dogs are anything like him, she might really need two years at least to be ready

Pretty sure Sanchez’S dogs are golden retrievers, not labs

Yeah, they are. But something like this – https://en.wikipedia.org/wiki/Labrador_Retriever – could be what Martinez is thinking?

Talking of breeding and arsenals apparently excellent medical facilities….. would you please just breed ozil and alexis. We can then clone the offspring three times and have a front four of sanchoz, ozchez, alexzil and mesexis sanzil.

To add a financial incentive to the scheme we could probably get away with loaning them to russias national team.

Mesexis Sanzil is a Phenomenal name!!! Is he Columbian or Mexican???

Anything to keep him at arsenal

Adopt. Save a life.

The pest pug-related name i could muster

Because pugs are awesome

Don’t forget Wenger is an Alsatian

A Different George
Reply to  Morbius

Knew the title had to be a joke. We do, after all, have photographic evidence from yesterday’s game that Alexis is looking to breed with Giroud instead.

And who could blame him?

I’m sure Alexis himself wants to breed with Giroud! #ThatCelebration

Arsene should take hint from this comment of martinez and just add 3-4 cute dogs to slightly improved contract that he has offered and at least 1 of them should be a female so he can perform all the breeding experiment that he wants. lol !

There he is, the Great Dane!

The Greatest Striker That Ever Barked!

Contract Negotiations: Alexis’ Agent: No, Mr Wenger, we will need more money. Alexis deserves a lot more than what you offer. *Arsene Wenger picks up the phone, speaks, waits patiently* *You can hear a door close, followed by footsteps* *Enter Emi Martinez and his dog* Arsene Wenger: What about now? *Alexis – Teary eyed, puppy faced – looks towards his agent* Agent: I am afraid we will have to print up some new contracts Mr Wenger. Alexis wants to sign a 7 year deal, sole breeding rights with Emi’s dog and an assistant to handle the instagram pages of all… Read more »

Very dramatic, judging by Sanchez’s interview after the game, I think it would be a great bargaining tool!

So, that is why we tied Martinez to long term contract already.

Wonder if we have any cat-persons in our team.
Reading your blog makes me wonder about really weird things.

You guys are cracking me up. I quite like the thought that Alexis loves his dogs so much, he extends his contract for 3 years just so Martinez’s Labrador is ready. Haha!

All are dogs except for

This website uses cookies to improve your experience while you navigate through the website. Out of these, the cookies that are categorized as necessary are stored on your browser as they are essential for the working of basic functionalities of the website. We also use third-party cookies that help us analyze and understand how you use this website. These cookies will be stored in your browser only with your consent. You also have the option to opt-out of these cookies. But opting out of some of these cookies may affect your browsing experience.
Necessary Always Enabled
Necessary cookies are absolutely essential for the website to function properly. These cookies ensure basic functionalities and security features of the website, anonymously.
Functional
Functional cookies help to perform certain functionalities like sharing the content of the website on social media platforms, collect feedbacks, and other third-party features.
Performance
Performance cookies are used to understand and analyze the key performance indexes of the website which helps in delivering a better user experience for the visitors.
Analytics
Analytical cookies are used to understand how visitors interact with the website. These cookies help provide information on metrics the number of visitors, bounce rate, traffic source, etc.
Advertisement
Advertisement cookies are used to provide visitors with relevant ads and marketing campaigns. These cookies track visitors across websites and collect information to provide customized ads.
Others
Other uncategorized cookies are those that are being analyzed and have not been classified into a category as yet.
SAVE & ACCEPT
wpDiscuz
87
0
Would love your thoughts, please comment.x
()
x
| Reply