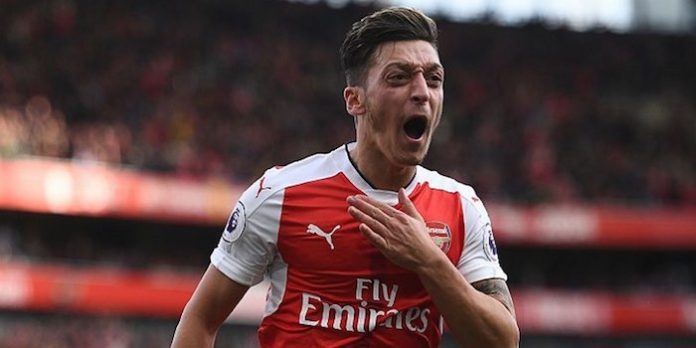 Mesut Ozil says that the players can feel the passion ahead of tomorrow’s North London derby, the magnitude of the game not lost on them.

Arsenal currently sit three points ahead of their local rivals, and a win would extend that gap at the top end of the table.

The German has been in excellent form recently, and says that a win for the Gunners would be huge.

“As a player you feel it some days before the game,” he told Arsenal Player.

“You feel the passion, you see the fans and you read in the newspaper that the derby is beginning.

“All the fans want something special, so our job on the pitch is to win the game, to take the three points against Tottenham.

“It would be huge for us to take the three points against them.”

For more on Mesut, today’s Arseblog looks at comparisons between him and Dennis Bergkamp.

You really get the sense that there’s a more pragmatic approach from the players this campaign. Ozil has been exemplary in the change of mentality.

I think a goal against Tottenham would give him a taste for goal he will want to replicate more frequently. I’ll take a neat assist too & 3 points.

Let’s kick start November with a message to the league that we’re not going to fade like years past!

Big game.
Need to Tottenham’s little unbeaten run, need to extend our own unbeaten run, and need confidence ahead of game against Mourinho, which will be equally as important, if not more.
I doubt Ramsey is fit enough to start a high intensity match, and same with cazorla, so alongside Xhaka and/or coquelin and/or Elneny need to have a really really good game in Central midfield to counter the press.

Far better chance of protecting midfield without Ramsey in it. Bring him on late if we are trouble.

With out team playing flowing football lately, having more rest than Sp*rs in Europe, let’s fire our cannons at them tomorrow.

On an unrelated note, Pep’s Shitty has lost points against Boro in a 1-1. Would be a great time for us to go top with a win!

We are not losing at home. I might as well go on to say that we are going to win convincingly and keep a clean sheet. 3 – 0 is my prediction.

A gooner
Reply to  Toni

Great time for a win, with city drawing at home to middlesborough, we can really push on ahead now

Wait what ? we were bashed after we draw with boro and now the mighty pep draws with boro. So calm down it can happen to anyone especially after playing CL in the mid week, so come one lets tomorrow be our day.

My wish dream whatever you call it we win treble Ozil Alexis and wenger sign long term contracts. OH and Maureen gets united relegated.

While you’re on that path, you might as well have Chelsea permanently disbanded.

Wilshere had a good game should have scored.
Thanks you chamber for defending against city.

Time to make top spot ours till the end of the season.

A win to top the table is really enthralling. High intensity in first 30 min and we are through. Need to start regular front four and bring Giroud as substitute to see off

Should go top with a win!

We’re in much better form. Thing to worry about though is Tottenham’s brand of zero creativity, kick everyone, shoot from everywhere shiteball seems more effective against big teams than against typical ambitionless lower midtablers.

Agreed. Hopefully they get appropriate cards for the constant team-orchestrated professional fouling. And hopefully we break their spirits by scoring early, a la Chelsea game.

Such a big 3 points we desperately need for the league as well bragging rights against the rats down the lane.
Man Shitty dropped points and Chelsea won so it’s a must win game! Why are Everton so shit?

So my missus booked our sons Christening for 1pm tomorrow(during the north London Derby)… Do I:
1) Turn up at the Church and ignore the NLD
2) Turn up and have an earpiece to listen to the match
3) Turn up and get updates on the phone
4) Stay at home, watch the NLD and organise the Divorce lawyer…

I’m lending towards option 4 myself

Stay at home and have an earpiece to listen to the match.

Option 4 to me seems to be the only reasonable choice here but, what do I know?!

Stay home, watch the match, have an earpiece tuned in to the christening.

Have the christening at home in front of the game on TV as we storm away 5-0 (religious shrine) … then put 2 earpieces in for a week afterwards so you can’t hear the wife moan about it.

My daughter is flying to Oz tomorrow at the same time as the NLD…I said to her: here’s a couple of quid get yourself a rickshaw to the airport…

Turn up to the church, get a mate to Facetime/Skype you with their phone in front of the telly. Watch discreetly. Get in the missus’ good books, and watch the game.

Watch the game. I’ll send you my number.
You can be my pro bono for the year.

5. Kidnap the vicar, hide him in the Spuds trophy cabinet – on one will look there!

Can’t afford to slip up. Chelsea are top and we need to knock them off the top. Spurs are weak at the moment without alderwereld and Dembele. Anything less than a win would be disappointing.

Can we recall Rosicky just for this one?
He always seemed to rollback the years when playing the scums!

That is twice the chavs have battered a team – were Everton really pony or something? I’m thinking spuds could do an Everton tomorrow lol they deserve a good tonking… frequently!!!

I watched the game and Chelsea are a problem. With no euro football, they are the real favorites to win the league, not liverpool.

Yeah its funny they didn’t get into Europe but the extra rest is doing them a favour!! However, how many extra games would we have to play if we got to the champions league final? There is two more group games and then a further 7, so 9 in total!!!

I wonder who teaches all the players about what to say about the Spurs.
I’m thinking we have a tutor just for this. Yes, a classy gentleman in a suit talking in a heavy accent about the culture of the club.
Wait I’m just imagining Arsène aren’t I?