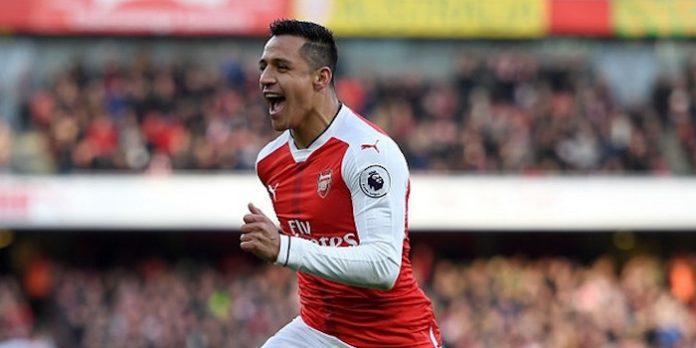 Arsene Wenger believes Alexis Sanchez is continuing to improve tactically and hailed the instinctive attacking qualities that have brought the Chilean ten goals this season.

For the first time in his Arsenal career the 27-year-old has been fielded consistently as the focal point of the Gunners attack and has reaped the benefits, most recently in the 3-1 win over Bournemouth in which be bagged a brace.

Speaking to Arsenal Player about the progression Alexis has made since moving to the Emirates, Arsene Wenger touched on how his star’s will to win and eagerness to make things happen on the pitch makes him a natural striker.

“I think Alexis adds to his game a desire to fight for the team and as well, he’s a winner, he wants to win the game and he does what it takes to win the game,” said Wenger.

“I believe on a tactical front he has improved much more, he works much more for the team and when it’s needed during games, he works very hard for the team.

“I think he has improved a lot on [running effectively]. He’s more conscious of his responsibilities and he is an intelligent player. He understands what he has to do and I believe he’s more willing to help the team.

“He has the instinct of a real striker,” added the boss. “He wants to hit you, he wants to go at you. When he gets the ball, he runs forward and he runs at any defender. He shows, maybe sometimes to excess, that dribbling quality is an important quality for a striker.

“It’s his game and you do not want to take that out of his game. His dribbling is provocative, it’s not retention, it’s provocative, to create damage.”

[Insert line usual line about us tying down Alexis to a long-term contract because he’s pretty good at football and has cool dogs.]

Let’s tie him down for the next few years.

And keep him free up front to reek havoc on opposition defences. We look very good with him as our striker (and having Giroud as a great Plan B).

Keeping Alexis (and Ozil) is so so important if we have any genuine ambition to win anything at all.

And I think our league hopes genuinely do fall on managing to keep him fit across the whole season. If we can do that then I think we do have a chance at winning it.

Totally agree, along with cazorla, Koscienly and hector. If we can keep those 5 fit through out the season then we have a good chance of winning the league. We’ve really missed cazorla in the last couple of weeks, our midfield just seems so stale without him there

Although if I’m a defender and have Sanchez running at me, my shorts probably emit that reek of which you speak.

Got my coat already.

Cant arsenal just give him some female labradors to breed with

* for his dogs to

just imagine if Wele is back from injury. Wele on the wing will get the best out Sanchez IMO!

That actually sounds like a really good idea, it’ll allow welbeck to focus on what he’s really good at – which is bursting down the flank with pace and linking up with his teammates, also releasing the pressure of being the main goal threat

We need to tie Alexis down to a long-term contract because he’s pretty good at football and has cool dogs.

Not to mention that intangible quality, the way in which he drives the whole team forward, and improves the work ethic of all those around him. It’s good for Arsenal as a club to be on their toes with regards to his future, it keeps everyone on their toes, including the boss. But yes, sign da ting.

intangible, did you say? 🙂

He needs to stop going so deep though, we need signs on the pitch like in Forrest Gump STOP SANCHEZ STOP!

Against Bournemouth, he did stay quite high up the pitch. I just think against teams of better calibre where we are struggling to create that he takes it upon himself to make things happen. He should drop deep sometimes against this sort of opposition but not as much as he does. Let’s not forget, it’s his first season as our first choice striker so it’s a learning process.

The only guy that heals his injury by playing continuously………..what a guy.

He’s like a Chilean Wolverine, but with better hair.

An internal solution to our striker-problem. Sometimes they work.

Off-topic I know, but isn’t it great news about Tony Pulis? Couldn’t have happened to a nicer guy!

He’s going to have to manage neanderthals into his 90s to pay that judgement!

After that headline I expected a much more interesting photo

From the bottom of my heart and the backs of my eyeballs, I for one was immediately thankful it is not so.

We would all be wise to at least not post photoshops of Alexis in ladies’ gear until After he extends his contract. And given the nature of contracts these days, and everyone’s retinal sensitivity, probably should never.

Reading between the lines, Wenger’s comment about Alexis dribbling to excess rings true. He is a great player with a fantastic final ball, however I would like to see him give it a little quicker at times.

Which position does Ozil play in that formation?

Granit, Mustafi and Lucas brought in this summer, the former two have settled in very well and quickly (mustafi when you consider Kosceilny had a horrendous adjustment season)

He has his faults the gaffer, but he knows a whole lot more than some of the noisy empty vessels that periodically like to hold banners up against him.;)

As far as striking options is concern, I feel we have two ways to break teams down. Against teams charitable enough to come at us and present space, Alexis up top with Iwobi and Walcott flanking. Against teams who cede space and withdraw into a shell, use the sledgehammer with Giroud AND Alexis wide, Ox on the other flank. I don’t feel we should aspire to vary too much beyond this (Subject of course to injuries). Adding say Ramsey into the works across the front 3 destabilises the understanding between the players on hand amongst other things. Rambo is better… Read more »

GIroud – as a striker, clearly waaay more effective than some care to imagine (same facile critics that like to lay in on Per or Flamini before)

Granted he isn’t TH14 but he has been a pretty good striker for us.

Now we have 3 options Alexis, Giroud and (when he finds footing) Lucas. Not too bad.

Time to make up the GD this season. It may well come to that!:P

I like Giroud as much his next supporter, but even I can’t imagine a world where he averages 2.33 goals per appearance as you’ve stated. Perhaps you mean he scores a goal every 2.33 appearances? In which case, that makes him significantly less prolific than RVP and slightly less so than ade.

santori, can you remember when Jon Jensen scored 1 (beautiful) goal in his 99 games for Arsenal?
does this mean you’ll be claiming that he averaged 99 goals per appearance?

I’ve always wondered if we would benefit from playing Giroud and Sanchez together much the same way Giroud and Griezzman were deployed in the Euros… Granted I know this would shake up our midfield arrangement. Any thoughts?

A golden balloon would be just the right level of cheapness for that trophy.

Gonna play devils advocate here….
Didn.t Alexis play un a front 3 with Barca and in a front 2 with Chile, so it.s not the biggest leap in the world to move up top for us esp. considering how awful he was on the left when he came back from injury last season.
And whilst Pulis is a massive bellend and treated Palace shabbily he did still keep them up and earn the money he has since been ordered to repay

No, he is not a Real striker. He is an Arsenal striker.

If he can restrain himself from going deep too much and work on his weaker foot more, he’ll be right up there with Suarez and Aguero. Sensational on his day, and we’re really lucky to have him. Dreading to think were Liverpool would be if they had got him ahead of us. One of Wenger’s best ever signings, and cheaper than Andy Carroll too 😉