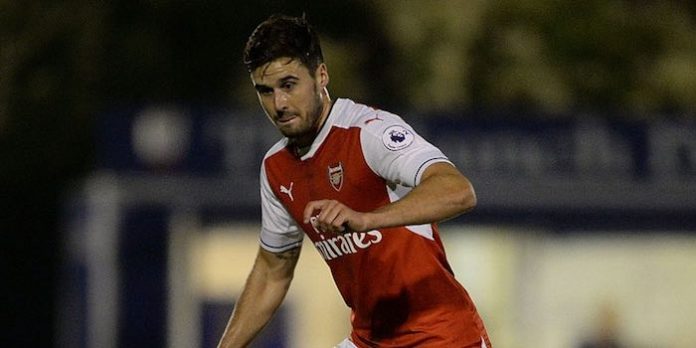 Arsene Wenger says he won’t use Shkodran Mustafi at right-back in the absence of Hector Bellerin as he doesn’t want to break up the impressive centre-back partnership the German has forged with Laurent Koscielny.

In the absence of Bellerin – ruled out for four weeks with ankle ligament damage – and Mathieu Debuchy – just returning from a calf problem – the boss says he’ll likely turn to either Carl Jenkinson or Gabriel for tomorrow’s game with Manchester United.

“Hector is Hector,” Wenger told Arsenal Player. “He has strong points and is a very strong player. Our team likes to go forward so we’ll try to keep these attacking options open.

“The options are basically Jenkinson – because Debuchy will play his first game back on Friday with the under-23s – and also Gabriel because he played a few times at left back for Villarreal.”

“I do not want to destroy what works to put a player somewhere which is not 100 per cent his position,” explained the boss when asked if Mustafi might shuffle to the right of defence.

“You have to keep your strong points in the squad and our central defence has worked well, so let’s not destroy it. Sometimes, to correct one position, you don’t have to change two.”

Arseblog News suspects Jenkinson will get the nod tomorrow; not only is it a position he knows, but he also offers us a decent option going forward. We’re struggling to envisage Gabriel bursting to the byline and delivering a delicious cross for Alexis to head home…although we’re willing to eat our words.

Tbh, I’m not the least worried about RB if Jenko is in charge of keeping Lingard/Depay quiet. He’s shown he’s a pretty solid backup to el Hector.

Martial/Rashford drifting into the channel might be more of a challenge for him.

Jenks has proved to be an effective player going forward. Let’s hope he can do the business in defence first and foremost!

That was four years ago and I think it was his first start ever for the club. We also had more than half a dozen of our first XI out injured. It’s pretty damned unfair to hang that result on Jenks.

Comment:if its jenko, i hope giroud plays upfront bcoz he can cross well for the hfb to smash his header

I laughed painfully rememvering all we have been through.

and Mathieu who?
new signing?

He has to go with Jenks with this one, just feel we would lose a lot of our key attacking play down our right hand side if Gabriel slots in there.

Why doesn’t anyone mention holding?

I think he also mentioned Coquelin but not AM-N.
Should we ask why he doesn’t mention everyone else?

I’d rather use Gibbs there instead of Gabriel tbf. But right now it should be Jenkinson who get’s the nod.

It Is What It Is
Reply to  AngelGooner

Erm…he did play a season and 10 games or so with West Ham.

He’s just coming back from a medium-long term injury. He’s a fit and capable deputy who needs games to find form and consistency. He’ll flourish.

He is alive, Debuchy is alive

Debuchy scored the opener for our u23’s away to spurs u23’s today as the young guns ran out 2-0 winners. Mavadidi scored the second with a stoppage time penalty.

So they’re shit at all ages. Never too young to burn down your own home.

Gabriel surely much better than Djourou at the right.

Jenks has something to prove at the old toilet- and you know he’ll give 100% for the team. I’m more concerned about who will play in front of him on the right if Theo is off with his new child.
Expect martial or Mata on their left tomorrow- as jose will set up to not lose first and foremost. A loss to us at their place makes his position almost untenable.

Moronho’s place as a member of the human race is untenable.

Rob Holding has some pace, footballing ability and not a bad passer. Think he could do a job on Martial. According to transfermarkt he can play right back as well

I 100% agree. holding has looked good every time he pulls on an Arsenal shirt and I recall at time of transfer he was positioned as a fullback as well as center back. I Think AW might be pulling a fast one, trying to surprise Mourihno at last minuted.

i want Gabriel back there with a kicking the shit out of them.

I keep on getting redirected to a video about NBC Sports highlights. Is this happening to anyone else?

So, Arsene said he doesn’t like to put a player somewhere out of position ? – is he feeling okay ?

In the interview it sounded more like he didn’t want to break up a strong CB pairing unless he was moving one of them to a more usual position, rather than just about a player being used in their ‘secondary’ position.

It Is What It Is
Reply to  Georgeycharles

If you are referring to Mustafi at RB, then I’d ask why take the chance/ almighty gamble, on a mismatched back line for the first game of Ector’s five week lay off? It’s a squad ting, and it helps prepare Jenkinson for PSG and other fixtures…..except we are about to do the same in those games. That would defeat the purpose of having 25+ players at our disposal. I am happy for Holding though, ‘cos it shows he is our 3rd choice CB at this moment in time. This places Gabriel at 3rd for RB, and 4th for CB. There… Read more »

Well, I’d still give him the nod over our previous Brazilian full back.

To be honest, I’d give a bundle of sticks the nod over that guy

Gabriel, not in form, scares me as much as Sandro used to. Carl has to be the option

Interesting that Wenger is considering Gabriel. He mentions he played Lback before. If I’m not mistaken, Mutafi has played Rback for Germany. My issue with Jenko is he is not technical. BUt if he can put in a no nonsense shift and keep it tight defensively, we can still push on left flank with Mionreal and likely Alexis. What we will miss regardless is definitely the width provided by Bellerin and the threat he has with his pace. Whoever plays ahead of Jenko (Be it Walcott or Ox) will have to be mindful to support Jenko defensively too. The other… Read more »