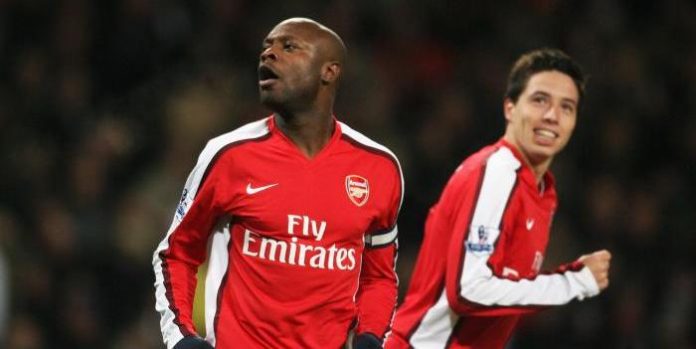 Ok, so it’s not really Arsenal related in terms of news, but it’s the Interlull, it’s quiet and this is quite bonkers. William Gallas has suggested that Samir Nasri tried to have him tasered.

The two were far from friends after a run-in on international duty. As a young player, Nasri sat in Thierry Henry’s seat in the team bus and had a confrontation with Gallas when told to move.

Later the two were teammates at Arsenal, with Nasri revealing that they went a year without speaking to each other. So this week, speaking to a show called Locker Room on RMC Sport TV, the former Gunners captain told a tale which suggested Nasri tried to have him attacked with tasers.

This is the bit, translated as best we can through Google Translate (any French speakers who want to correct/improve it, please leave a comment below). The incident took place in 2009 outside a Paris hotel where there was some kind of shindig ahead of an international meet-up.

Gallas: “What you need to know is that I was staying at the hotel with my family. I was with my cousins for a meal, it was the eve of a rally of the French team.

At the end of the meal, I leave the hotel and there, there are people who come to meet me and want to talk with me. Initially I did not want to, then I recognised a person who was often with Samir at the Arsenal training ground.

A few days previously, we’d had an altercation in relation to something he said, and I did not appreciate it. This person wanted to me to go and see Samir who was in a car down [the road].

I was about to follow him but my cousin, who is a policeman, told me in Creole not to go there. At the same time, I took a small look to the side and I see someone squatting with a bag … in the bag, there were tasers. I do not know why.

But luckily I was with people that day, because I do not know what could have happened.”

Thanks to @TriboKing for the heads-up

Frimpong: Samir Nasri was an idiot

Arsenal to earn UEFA handout thanks to Nasri & Fabregas

It would have been very unusual for Wenger in his Arsenal team to have, along with the Ade vs TGSTEL clashes.

These days it’s all about the Bromance at The Arsenal.

Where is nasri now btw, still with manciteh?

Sunbathing in sunny Seville, the girl needs a tan indeed.

probably sunbathing with his snood on..

Travelling the world in search of something he’s missing…

nasri is playing for sevilla – loaned out. Apparently he has been tearing it up there and has been in great, great form.

Both massive teats. Paticularly Nasro, but will never forgive Hallam for the cheek to take the number 10 shirt. What the fuck!?

Hallam was a brilliant player at his peak. Nasro had the potential but sadly failed to reach those lofty heights.

Let’s hope Alexoe and Ozzy do what these couldn’t.

I think you missed the most significant auto-correct… unless you do really think of them as massive teats?

Cazorla's Both Feet
Reply to  Mesut

Bizarre might be a bit of an understatement on this one. Also, a bag full of tasers? Would one not be enough to take him down??

You can never be too sure, I guess.

Even more bizarre than Mourinho’s press release that Gallas threatened to score own goals if he doesn’t let him move to Arsenal.

to be fair I wouldn’t believe a word mourinho says..

Maybe it was a bag maltasers

Being Toure, now I understand why you would think of maltasers rather.

Agreed. Not shocked at all!

Should have tasered him in the nuts. Probably would have made him a better player.

I suspect that The Penis of William Gallas would have found this most invigorating.

Gallas: “I’m a massive cunt and so is Samir”

Great players? Maybe. Great people? Apparently not. Not sure how much either were ever really committed to the Arsenal cause too.

Not great players, no way. Giant tools, not committed to any cause other than their own

The boss seems to like Gallas and speaks kindly of him. Good enough for me.

Yeah but then he went to sp^ds

Stories like this make me even more glad we seem to have truly moved on from the early Emirates era. A good few years of this kind of stuff doesn’t even surprise anyone when you consider we had a team filled with the likes of Andre Santos, Eboue, Denilson, Squillaci, Bendtner.

Our team nowadays gets slated a lot but it’s easy to forget that it’s definitely a level above what we used to have – the competition have jumped up a notch too however.

true, but in all honesty….i think the 2007/2008 team would beat the team of today. That movement off the ball that they had when attacking….glorious.

I’m not sure if that is a coincidence, really…

Google translate has got it pretty spot on. There’s no bad translation which changes the story.

This was in response to a interview the night before with Nasri before where Nasri claimed he came to see Gallas at the hotel with two friends, but Gallas was surrounded by a posse of seven. Gallas clarified his version of the facts last night with the taser story. This show called “Le Vestiaire” (Locker Room) is fantastic because Manu Petit and William Gallas are regulars and they share fascinating stories about their time at Arsenal and Wenger. A few examples – Manu doing a rainbow flick on Tony Adams – Gallas’ reason to pick number 10 – Ian Wright… Read more »

are there any translations of those stories?

Nasri is definitely a weasel-y enough cunt to set something like this up. And Gallas is definitely a stroppy enough twat to instigate something that warrants a massive tasering by a birdshit-haired weasel and then cry about it 7 years later instead of just giving the weasel a slap.

Ah, those cheeky French rascals. If they’re not busy blackmailing one another over illicit sex tapes they’re ganging up to tazer each other.

Thanks mate. I don’t usually laugh out loud and this week I really need to laugh.

It Is What It Is
Reply to  Clive St Helmet

It’s the interlull, so here goes… There has been a socio-cultural problem between the players of North African and West African+Caribbean descent in the French team. It’s a theory based on observation, and I don’t mean to further incite peeps. Nasri is from Marseille, and I can only presume the chatacters he would have been exposed to from an early age. Not condemning the city or its inhabitants, just highlighting it’s criminal history. Ben Arfa vs Cisse is another example. Benzema’s comments about being considered French when he scores, and North African when he’s being a blingy, off-form prat, adds… Read more »

Naa, Im not buying this. It would have been out of this world. Might as well have hired assasins Nasri, if he was planning this? What in the hell would he have had planned for the after…..

How we’ve narrowed our french ‘fries’down to three

Glad to see the back of Nasri, what a thunderous cunt.

So that’s where Nasri’s neck went to…
It got tasered into the back of his throat.

*did I even spell their names correctly? Is it even worth Wikipediaing?

Honestly,if you want to totally incapacitate Gallas there’s no need for the tazers, just give him the captain’s armband and watch him stagger to the floor paralysed as you score a last minute winning goal past him.

Why don’t you sit in the centre circle and cry about it. Dickhead.

Gallas may have been a tit and pretty poor captain but he was a damn fine player. Think he just spent too much time at Chelsea b4 we got him?

These mischievous french rascals and their little treats! This story made me think about this young Traoré and how he equipped himself going to a North London Derby in 2007. Without taser, but something he saw fit and proper for the occasion
http://metro.co.uk/2007/09/18/gunners-youngster-caught-with-knuckle-duster-138173/

Both Gallas and Nasri were and are supreme cunts.

Thank you and Goodnight.

He’s obviously a very dangerous lesbian and should be locked up.

I remember bumping into Gallas in a hotel bar a few years back where he was meeting lady “friend”who had clearly never met.

The link though to this story is that Gallas and Nasri are a pair of massive tits, whilst she had a massive pair of tits, and i mean massive!! Special request massive!

Are we to take it that this friend was a lady of negotiable affection?

So..we don’t actually know that the crouching taser guy has anything to do with Nasri who’s in a car down the road right ? – just saying..

Though I accept, Nasri is a massive cunt

They should turn this into a film

Footballers write books all the time where the fuck are these bits in those books. When you hear of Arsenal being such a family based setting you have to wonder how these two nut jobs even lasted that long Arsenal. All you have to say is Good redence. Fuck those two dim wits

Nasri was waiting for Gallas inside a car down the road. Reports claimed that the car did not have a shin.

what a shame those lot wore Arsenal Jerseys, Nasri, Cesc, Rvp Song, all these guys thought they were bigger than arsenal when they got a bit of form, after Arsenal has endured their childish football till they got form, now i look at them wherever they are & just smile, Arsenal made them look better than they were!