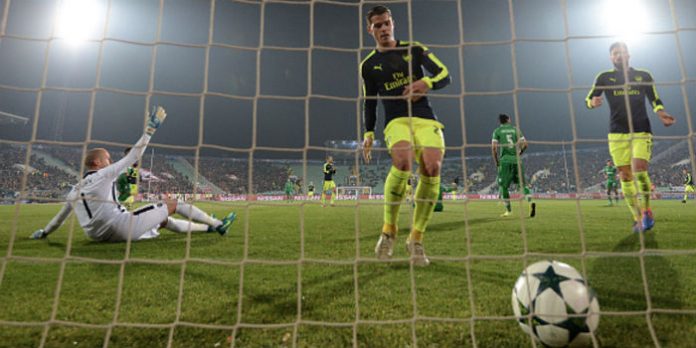 Granit Xhaka says it was important for Arsenal to maintain their good form against Ludogorets as they look to build momentum going into Sunday’s North London derby.

Last night’s 3-2 victory in Sofia means the Gunners have won 10 of their last 11 games and stretched their unbeaten run to 15 games; a fine run of form that leaves them level top on points of both their Champions League group and the Premier League.

“We expected that kind of game,” the Switzerland midfielder told Arsenal Player. “We knew that it would be difficult here, and that many teams have had big problems here in the past. In the first minutes we weren’t awake, but after that we came into the game better.

“The home and away games were very two different matches. It’s always different to play a team at home as opposed to away. Today Ludogorets played a very good match, but what’s important is that we won the game.

“It’s not just important for us players but for the whole club and for the fans. Keeping this momentum up ahead of Sunday was vital and of course we want to beat Tottenham.”

Sp*rs remain the only side not to have lost in the Premier League this season. Not that the legacy of the ‘Invincibles’ is under threat or anything, but it would be delicious to put our neighbours in their place on Sunday.

Over to you Mesut.

Such a great player, but he will most likely get sent off against Sp*rs lol

Kos needs to teach Xhaka how to win the ball without fouling, haha.

Hoping for a Xhaka thunder strike for the winning goal against Sp*ds (or is he still suspended?)

He’s available having served his suspension against Reading, Middlesbrough and Sunderland.

Why not a Xhaka thunder strike to top off a 6-0 spanking of the Spuds?

Mesuit will bring those twats back to earth.invincibles my arse

Sounds like he understands the importance of fucking up the shits on the lane already.
Get me a 35-yard screamer Granit, as you hit the winning goal on the 65′

See id like spurs to go the season unbeaten, but with us still finishing above them. Would be delicious.

They’d be called the “the gap-minding invincibles”.

It’s nice thought, but requires that we don’t win this weekend, hence I’ll certainly pass on that.

Furthermore, you don’t have to wish for St.Totteringham; he’ll appear for as long as the best manager in the world is with us. Given that, why on earth would one wish something positive on Sp*rs?

That would mean we dont win on sunday or away at the lane. So no… that ssouns terrible.

November has started on a winning note, hopefully the month will end on the same note.

Don’t say that! That statement could also mean we’ll only win the first and last games of this month.

I think it’ll b vital if Xhaka can avoid silly fouls,otherwise he is a great player.

We’ve got a strong balance in our midfield now. Xhaka, Francis, Elneny, Ramsey, Cazorla. Amazing. Against Spurs, I d go for Cazorla and Xhaka as our defensive midfielders.

I have been reliably informed that the last time Spurs went 10 games unbeaten in the league was way back in the 1990/91 season.

They finished that season 10th. May history repeat itself. COYG.

If we don’t lose on Sunday we will have a 10-game run unbeaten in the league ourselves. Of course, I’m expecting a win, which will prevent an 11-game run by Sp*rs.

The heading should read xhaka targets sp*ds slap. Loved his blatant foul last night. Hope he thumps one in on Sunday and then slices down a sp*d or two.

ALL OPTIONS are available : There is no PLAN B. All these PLAN B players have come in and done well. Giroud 3 goals in2 matches. Where would we have been even with Alexis up top against Boro, we may have struggled to finish them off without Girou’ds direct threat and presence in and around the box. We struggled to score the second even with Alexis on the pitch before his introduction. We have played BOTH GIroud and Alexis before and Alexis has plundered plenty of goals two seasons ago in the left wing It is limiting to suggest that… Read more »

I don’t think anyone is suggesting that we can only play with Sanchez as CF.

I think the mitigating factor for selection this weekend will first and foremost be injury/fitness.

Santi may still be an “If”.

Walcott and Bellerin would be a huge bonus if they are good to go.

Whatever the case may be (Giroud or Alexis or BOTH) , we have plenty of options even with Lucas and Welbeck out.

That may be the key to producing a better November.

What i like is that Xhaka and a few others now show teams that they cannot foul us and get away with it. They hurt our player, we hurt them too, just a little later. See, i feel that some of these challenges on our players are deliberate. Yea, i said it.
Some oppositions resort to hurting our players to put them off the game and give themselves a chance.

I think that is a pretty uncontroversial thing to say; of course many teams have to resort to cynical fouls when Arsenal are by and large technically superior. The difference is now we can give some of it back!

Xhaka v Wanyama ?,hope he doesn’t change the way he plays, Viera was like him at the beginning of his Arsenal careers