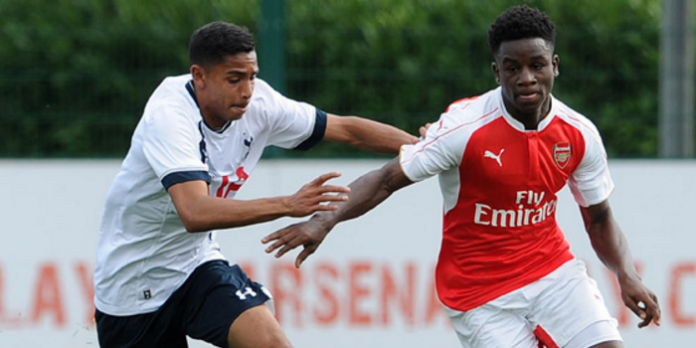 It certainly isn’t expected to be an easy tie, with Blackburn having a talented academy side who are able to cope both physically and technically.

Arsenal, meanwhile, have some excellent prospects of their own in this age group. The likes of Jeff Reine-Adelaide and Chris Willock are no longer eligible for this competition, but coach Kwame Ampadu can call upon starlets such as Reiss Nelson (who has been one of the key performers for the U23s this season), Vlad Dragomir, Donyell Malen and Edward Nketiah.

In midfield, meanwhile, Arsenal are likely to deploy Marcus McGuane and Josh DaSilva, two players who have vast experience of playing for the U18s.

The concern for Ampadu, however, will be that Arsenal’s defence doesn’t exactly inspire confidence that the club can enjoy a lengthy run in this competition this season.

Right-back Jordi Osei-Tutu (pictured above), for example, is a threat going forwards but is prone to lapses in concentration defensively, while the same can be said of left-back Tolaji Bola.

At the heart of the defence Joseph Olowu is calm in possession and specialises in bringing the ball out from the back, although he can occasionally get caught out. The first-year scholar is likely to be partnered by Kostas Pileas, who is rather error prone.

The above information suggests that Arsenal goalkeeper Joao Virginia could be very busy indeed, and the hope will be that the attacking prowess that the Gunners possess will be sufficient to see them progress to the fourth round.

If they do manage to reach the next stage of the competition then Arsenal will take on Aston Villa, who boast one of the best youth set-ups in the country.

Success certainly won’t be straightforward for Arsenal in the FA Youth Cup this season but for now they should focus on Blackburn and hope that their attacking stars can make an impact.

As long as Vlad is in there, I’m happy

Defensive weakness? Good to see the youth team following the example set by their senior counterparts

Name four Premier League teams who have conceded fewer goals than we have this season. Go on.

So cute to see you bring up stats to deflect from reality…we are shambles defensively even with mustafi in the side. Loosing ground with the leaders because of it…Hopefully we turn it around soon

I like how on my iPhone the headline contracts to: Defensive Concerns As Arsenal Get F…