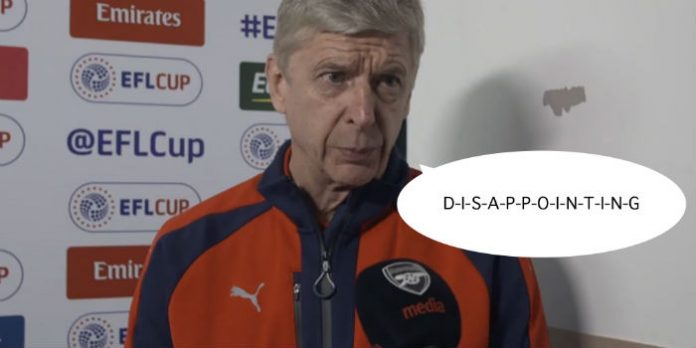 Arsene Wenger used the word ‘disappointing’ 11 times in the space of three minutes to describe Arsenal’s poor performance and subsequent exit from the EFL Cup at the hands of Southampton.

The Gunners delivered a limp performance in attack, disjointed showing in midfield and were far too open in defence on a night when two first half goals were enough to seal victory for the visitors.

Here’s what he said to Arsenal Player about the defeat…

“That what we did there was not Arsenal. It’s not the way you can stay in the competition and that we want a different response. I think it was there, but overall it’s a disappointing night and I must say, Southampton deserved to qualify and well done to them. They were ready from the start on and we were not.

“It is a learning experience but it’s still disappointing. People will say I made many, many changes. But look at the names of the players who were on the pitch tonight. We had plenty of Premier League games on the pitch.

“I felt we had a squad that could win it [the Cup]. We had the luck to play at home. It’s disappointing to have a crowd like we have, you can give them some satisfaction in this competition as well and the way we started the game, I think it’s disappointing.

“I don’t think I can moan about the momentum in the Premier League, that is important for us. I knew that in the League Cup that could happen, but it’s disappointing to lose the game more than the run we have. The run we want to keep in the Premier League, but I am very disappointed tonight because there are questions on important things. You know, when you turn up in the first 45 minutes we played.”

All in all, it was a cack night.

Couldn’t care less that we’re out of this. Focus on non-pony tournaments.

Spot on. It would have been nice to have won but we could ill afford extra 2 games in Jan vs Utd or Pool when clearly focus is somewhere else. Not happy with performance but happy with result. Let’s move on.

People need to realise that he’s probably the most disappointed after yesterday’s defeat. “You see this, my heart, after every defeat there’s a scar in this heart”. Long he may be our manager. #OneArsèneWenger

Iwobi should play as number 10 under a striker, same story for the jeff should play cm or cam and any match for them on flanks ifluences their carrers
Ox and maitland nails are the best option for this stiuation on RB
On LB moneral and gibbs are soo bad soo we should buy a player or giving a chance for a youth player maybe could be like bellerin ex marc bola

But what do you think he’s really feeling?

He said plenty without really saying how he felt…

I expected he’d be a tad…maybe…disappointed?

I’ll see myself out now…

Isnt this his end of season speech?

The players were just rubbish last night he summed it up perfectly by saying even if we had played for two hours we still wouldn’t have scored.

Disappointed obviously but who cares about the league cup. Let the non cl partakers scrap for it

ManU care about the League Cup. Because this this is the only trophy they can potentially get.

Typical Arsene Wenger! With his mentality, Arsenal will never win the League Cup again until he leaves! I’ve said it time and again! Did you see the team fielded by Man Utd? And Man U are bigger than Arsenal by far if you consider their achievements! Mourinho is right in every way about Wenger when it comes to building a winning team!

This is satire, right?

I think the Manchester United team selections were more a case of Mourinho “desperately needs to find any wins to cover up their position in the BPL”.

Is that you Duncan?

Yeah right, Manu with moureen is doing so great that the legue cup is probably their best chance for wining anything this season. That might also give you a clue on why manu are fielding the strongest eleven in a least important competition. But I guess you are just gutted with Arsene and you use every oportunity to bitch about him even when it is totally uncalled for.

You missed a ” disappointment” in the last paragraph. There are 11 actually

It seems that we lacked the mental strength to get back into it.

I have to say I don’t mind, but that probably says clearly that Wenger has managed Arsenal for the majority of my life.

I’m disappointed that Wenger’s disappointed.
He’s the kind of person who notices positives even in a 4 day old corpse..

Wenger has never won the League Cup or Champions League for that matter in TWENTY attempts….why are people surprised when we crash out every year? Nothing will change until he’s retired.
Sad fact.

But just you wait, oh yes… come thenext manager and we’ll be prioritising the shit out of the league cup… just like mourihno…

Because like Man U this year it might just be the only cup we stand a chance of winning….

Why Wenger, why don’t you prioritise the lowest priority competition?

We’ll thrush West ham to wash away our disappointment .COYG.

Who the fuck is that Duncan Castles fellow? Absolute nonce

I understand why Arsene is dissapointed, but not why so many fans are. The EFL cup is a chance for the players in the bench to get playing time. Nothing more. Now let’s concentrate on West Ham, and games that matter.

Two games out of the way in our quest for fourth!

“It’s disappointing to have a crowd like we have”

The boss just pointed out the elephant in our stadium didn’t he?