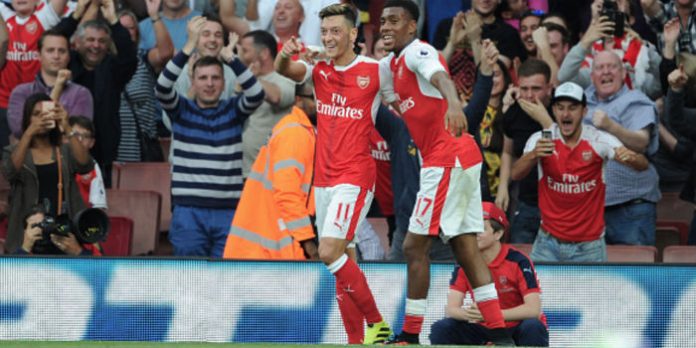 Alex Iwobi says Mesut Ozil and Alexis Sanchez often take the mick out of him in training but it’s just their way of helping him improve.

The partnerships struck up with Arsenal’s star duo have been an eye-catching part of the Nigerian international’s game and he admits he still has to pinch himself after a whirlwind breakthrough year that has seen him progress from life in the academy to high-profile first team regular.

Speaking to the Guardian’s Amy Lawrence about his development, Iwobi noted:

“When I sit down and actually think about what I have done, to score in the Under-19s a year ago and then to score my first Champions League goal for the senior team is mad.

Tuesday’s close-range strike – Iwobi’s first of the season – was laid on a plate by a majestic assist by Ozil and there’s no doubt the World Cup winner’s efforts are appreciated by the respectful young pretender.

“I have to call him ‘my boss’ because he assisted me,” Iwobi explained.

“Alexis likes to take the mick out of me when I don’t score in training. They are funny. They will tell you what you need to work on but in a jokey kind of way.

“They do advise me, saying I just need to compose myself, relax and the chances will come. They try to help in the best way they can.”

All very nice to hear from a young lad who seems to have his head screwed on the right way.

It’s well worth checking out the rest of Amy’s interview with Alex. There’s lots of good stuff about coming to terms with fame, playing for Nigeria and an insight into the hard work that preceded his speedy ascent to the first team.

Lets hope they don’t give him contract renogiation hints….

I am so happy about his progress. I see him doing more greater things in Arsenal.

Awesome interview, Iwobi seems like a proper guy. Being from Leeds, and as such a Leeds fan, one thing helped me develop my interest in Arsenal was always Wenger and the attitude that he seemed to spread to his players. Also who couldn’t love anyone who was in any way related to King Okocha? Iwobi looks like a real force, onwards and upwards mate!

I don’t think Iwobi’s performances have warranted the amount of games he gets. He leaves a lot to be desired in terms of decision making.

In terms of goal scoring, he needs improvement. A winger must score between 10 to 15 goals in average.

Give the boy a break, he’s on his first season for goodness sake!

He can learn so much from those two, and let’s hope they give him a springboard in that respect. Seen him getting a fair amount of stick from some of our fans lately and it seems very harsh. People seem to be so obsessed with the instant success that they expect him not go through patches like all players of his age. He isn’t going to be Alexis fucking Sanchez right now so people need to allow him space to grow. It’s so clear that he has bags of talent and is grounded enough to want to get better. That’s… Read more »

This is good to hear. A refreshing reminder that they (Sanchez and Ozil) are not selfish money grubbers but leaders on this team.

I think we have Iwobi, Ox and Walcott (LUcas as well) still not fully consistent.

Wenger will look to rotate them to get the best out of them. The competition should spur all four on.

Just love the idea of Iwobi’s mum ‘making’ him do kick-ups in the living room. I’m guessing this is because he was intent on doing them in the kitchen.

He is extremely talented and a top lad. Still struggling a bit to find his game at the top level, so setting him up for a tap in was a nice touch by Ozil (and freakishly brilliant vision).