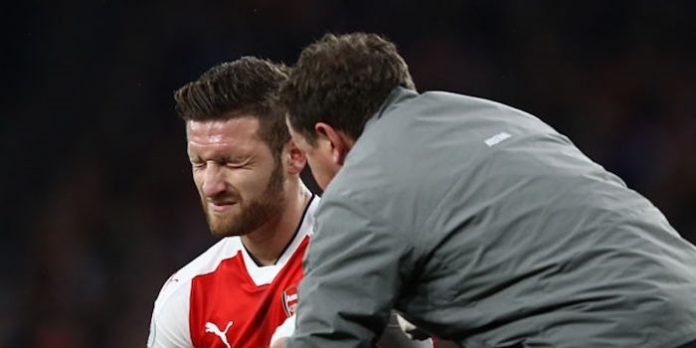 It looks as if Shkodran Mustafi will be out of action until NEXT YEAR after suffering a hamstring injury during today’s 3-1 win over Stoke.

The German international pulled up after about 25 minutes clutching the back of his thigh, and was replaced by Hector Bellerin.

Speaking afterwards, Arsene Wenger was a little flustered by a question as to the severity of the injury:

I asked Arsene about Mustafi. "It looks quite a good hamstring strain". I was baffled. He later clarified: "it is a bad one".

Before saying, “The minimum for that kind of injury is 21 days. That means he will have a nice Christmas.”

It is a blow with so much football to play over the festive period, but with Hector Bellerin back, Gabriel looking more confident, and Rob Holding in reserve, it’s not as bad as it might have been.

Quality signing. We shall definitely miss him

Certainly, but with Gabriel, Holding and potentially the BFG, we have competent cover.

Seeing this in writing reminds me.how much quality depth we have all across the back. Been a long time since we’ve had that

Shit! Time for Gabriel to step up. I think he will!

i like holding more. he is more composed than gabriel

I prefer Gabriel. He’s played well and deserves a chance to show what he can do. Holding is still raw and will take time to develop.

In training, but not back until new year I think.

He’s getting there…. slowly.

He will certainly be missed Loved his pass into Theo that almost gave us the opening goal. Though worried, I think Gabriel is looking okay so far and we have got Holding who plays with so much composure So we should be able to cope. I know we hype up our own but Bellerin is very very good How soon before he’s officially considered best right back in the world?

Not sure anyone’s really ahead of him right now apart from 33 year old Philipp Lahm, so I’m guessing a year or so max.

I think he has to establish himself at international level first, and that’d mean displacing at least a couple of very good right backs so not sure I see it happening just yet.

Holding? Either way I am liking the depth.

Pity for Mustafi, he has slotted into the team so well. Wenger was completely justified in waiting to sign on him. What quality. What I like about him as well is he also has an eye for the forward through ball. Clearly Wenger knows in the modern game, the Cbacks need to be creators particularly for us because we tend to have to play in opposition half for most parts as they cede territory. For the first time in a while however, I was not anywhere anxious with Mustafi having to come off with a knock (MInimum is 21 days)… Read more »

It’s a shame but we’ve got good backup options at CB. It’s likely it will be Gabriel due to Experience but Holding looks very composed beside Koscienly

See you in March, friend

Hammock time for you Hank, say hi to Mary Ann for me.

Haha down at the hammock district

Arsenal fans in such good mood these days. Nothing seems to bother us

Time for Gabriel to have a chance to show why we signed him in the first place. And playing regularly will help him keep his mind off of his recent loss hopefully.

Gabriel, Holding and in a few weeks, Mertesacker. A couple of years ago, we would be playing someone like Bielik. BIG BIG change!