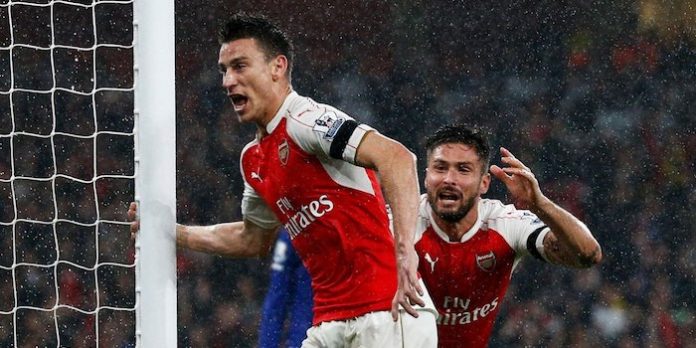 Via Get French Football News come reports from RMC Radio in France that Arsenal have agreed contract extensions with Olivier Giroud and Francis Coquelin, while negotiations are at an advanced stage with Laurent Koscielny.

Laurent Koscielny is in advanced contract negotiations with Arsenal about extending until 2020. (RMC)

The on-pitch skipper this season was reportedly close to signing new terms last month, and this would be a real bonus to tie him down for, more or less, the rest of his top flight career.

Coquelin signed a new deal in Febuary 2015, and has been rewarded for becoming a consistent presence in the Arsenal midfield with a new long-term contract.

Giroud, meanwhile, has extended his current deal by a year. It was due to expire in 2018 but will now run to 2019, and only last week his agent said the Frenchman was committed to Arsenal and had no intention of looking to move on in January despite only starting twice this season.

It does seem like the club are moving to secure players onto new deals. Earlier club secretary David Miles said that talks were going well with star duo Mesut Ozil and Alexis Sanchez, while the manager spoke last week about deals for Santi Cazorla (1 year extension) and Alex Oxlade-Chamberlain.

Let’s hope all goes smoothly with all of them.

Christmas gifts from France even though RMC usually blab about things they don’t know. Who other than England to give the Arsenal to the Forces Françaises Libres ?

A nogo for Sanogo? wth Arsene

What? Are you seriously expecting it to be sanogo, debuchy, and some unknown youngster?

Great news… It’ll be even greater when Mesut and Alexis commits as well. Looking forward to that day.

Follow this news up with a win later and then it will be an all around lovely day.

How on earth has the Coq not yet been called up to the senior French squad, not to mention capped?

A Different George
Reply to  Ebo

I agree that Coquelin should play for France, but they do have a load of very good ball-playing midfielders. The emergence of Kante has further limited the already limited opportunities for a defensive player like Francis to play alongside, for example, Pogba. (There was at least one game in the Euros, I can’t recall which, where Kante was simply incredible. I think he has been the key to Chelsea’s recent form.)

I second that. And before Kante’s rise, Matuidi had been quite brilliant. He’s slowly losing that now.

Unfortunate for him, but selfishly as a gooner it works well for us.

Also unfortunately for him France is quite flush with powerful midfielders right now.

Contract talks are so much smoother in FIFA

Down with this sort of thing.

Wonderful news. Most pleased Oli is staying despite his agent sayin hes happy. Had no fear about Kos as hes already publicly spoken about not leaving arsenal and as our captain he is adored and respected by fans. coq is an asset to any team and its great hes staying. Hopefully sanchez and özil news comes next.

First time in a good few years I want everyone to stay on.
I had quite a lot of players on my ‘deadwood’ list in years gone by, whether it be attitude or talent.
If we can keep this group onboard, we can do something very special with this squad.
Just a case of filling holes in the team as age catches up with a few of them.
Good times!

That’s good news for us the gunners,
And eagerly waiting for their brilliant display tonight

Put to rest all the media concocted rubbish about GIroud being discontented. They have to sow dissention amongst our ranks like how they are now trying to paint Granit as a ‘liability’. The they include the ex Liverpool cretins McMannamn, Murphy, Owen all people who seemed lobotomised but for the fact there isn’t much up there to perform one with anyway. Lest I forget Viera had a number of red cards in his career with us . GIroud can be massive for us this season and into the next. Ditto KOscielny. Another media perpetuated myth is that Wenger only buys… Read more »

I think everyone’s forgetting that Wenger’s contract is expiring the quickest and he needs to be the first one to sign. However, I feel this is similar to the 2014 situation. If Wenger wins something or challenges consistently in the league and goes far in the Champions League and the FA Cup. If not he may call it a day himself. #OneArseneWenger