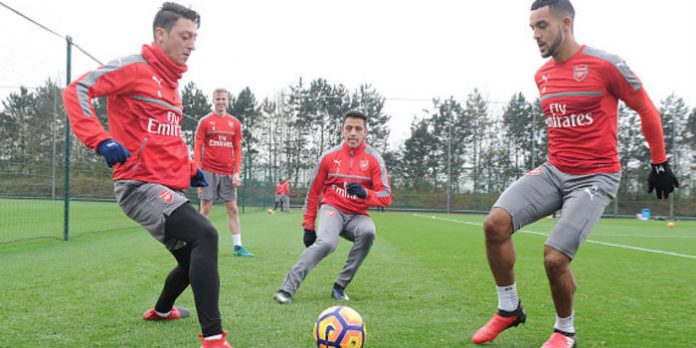 Theo Walcott says the brilliance and passion of Alexis Sanchez and Mesut Ozil inspires the whole Arsenal squad but that hasn’t impeded teammates from the occasional frank exchange in the dressing room.

So far this season Ozil and Alexis have 22 goals and 13 assists between them; an impressive tally that has helped the Gunners to the knockout stage of the Champions League and to second place in the Premier League.

Speaking ahead of Tuesday’s trip to Goodison Park, Walcott touched on his relationship with the star duo.

“When you see Mesut and Alexis, you think, ‘I want to be better than you’,” he told the Evening Standard.

“You see how hard they work and you think that you want to do the same. You can see that in the whole team, everyone wants to do more.

“Some of the things Alexis and Mesut do on the pitch are incredible. I have played with some fantastic players in my long Arsenal career, and Alexis is definitely one I really enjoy playing with and genuinely enjoy every minute on the pitch with him.

“Sometimes we might have a bit of a discussion among each other, that is what you want and it is that respect for each other. Do we have a snipe at each other? Now and then. There was a particular moment at Hull, but that will stay in the dressing room.”

The Evening Standard speculate that the incident behind the heated exchange was Sanchez’s spontaneous decision to assume penalty duty during the 4-1 win at the KC Stadium, despite regular taker Santi Cazorla being on the pitch; a situation exacerbated by the fact the Chilean then had his effort saved.

Walcott added of the burgeoning team spirit at London Colney: “It is good, it shows the passion we have in the team now.

“We have winners and I think Alexis is a winner, he has been to Barcelona and won everything and he obviously wants us to win as well. If the passion is there, the team perform much better.”

They will be loved even more once signed up for the next few years.

Theo has been quite good himself this season learning from the two of them and the same can be said for Ox. World class players make others around them better too and what we have now at the club I haven’t seen since the Invincibles squad.

Makes us all happy and hoping silverware will be coming too.

I think midfield is an area that we still have to stabilise.

However, as a whole squad this is as good if not better as any we ever had.

Agree- Mesut and Alexis have 22 and 13 assists, but let’s not overlook Theo has 10 goals himself (and I think a couple assists) so it’s 32 goals between the three of them. Not to minimize the impact of those two, but Theo’s hardly an also-ran this season.

and from right wing – ive said it before and will say it again – only Gareth Bale has better numbers than any other British winger. and i stress British cause Theo is no Neymar or Douglas Costa but he is very effective when on form.

Don’t know if cannoneer is more appropriate than sniper, but it made me think of this: https://www.youtube.com/watch?v=j1Ewc_XLFX0

let’s hope Theo is over his “consistent in patches ” mindset

I often wonder how that dynamic is in the dressing room, especially amongst players who don’t speak much English like alexis and Gabriel. Like assume the players were having a go at alexis after that failed penalty, how would that work, would there be a middle man translating the exchange

I’m assuming that up until this season, Arteta used to do it multiple times in different languages.

Only language missing is Brazilian/Portuguese and Gabriel speaks Spanish.

“If the passion is there, the team perform much better.”
#BrilliantTheo-ries

It is noticeable that when Walcott scores it seems as if Ozil and Sanchez do not join in the celebration with him usually while when Lucas scored vs Basel they were both there right away smiling with him on each of his goals. I know Alexis gets frustrated with his teammates while he is pressing hard and then nobody works with him as you can see from his body language. There is also a great deal (especially from Giroud) throwing their hands up in the box when someone else takes a shot (kind of like Ronaldo does all the time) among the team. I am sure that is normal competitive juices flowing and is similar across many teams, but is quite noticeable when watching Arsenal play.

Frank exchange? Swap you Frank Lampard for Frank McClintock says Theo. You will in yer bollocks says Alexis. Anything for a Frank Worthington chirped Oxlade.

Alexis has infected this team with fury and desire.

yes i agree we need more of that in our team

Good. I’ve noticed it on the pitch too. Whenever there’s a misplaced pass or a bad decision. I’m liking the urgency of our play and commitment from every player this season.

Still wish he would do less of these toe curling interviews.

“But that will stay in the dressing room”

Hmm, apart from when I’m talking about it now to the press.

I like Theo being interviewed he’s generally quite candid and will answer questions honestly. You can see there is a competitive edge through the team, a strong squad does that, no renting on laurels because Iwobi, Lucas and Chamberlain can come in, that’s before mentioning Welbeck.

I fancy us tonight, we’ve a great record against Everton and we’ve gone another gear or two in the last 3 games

We really need wenger to keep our top players for the good of arsenal fc , ok he made a big balls up with rvp but we need to get on with it.We got big games coming up if we can beat everton and man city away like we did last season then we should av believe

Its great for the team that we av got more then one player who can score goals for the team , yes its good for a player to get 3 in a game but the goals are not just coming from the same player keep it up arsenal and well done theo keep it going boy