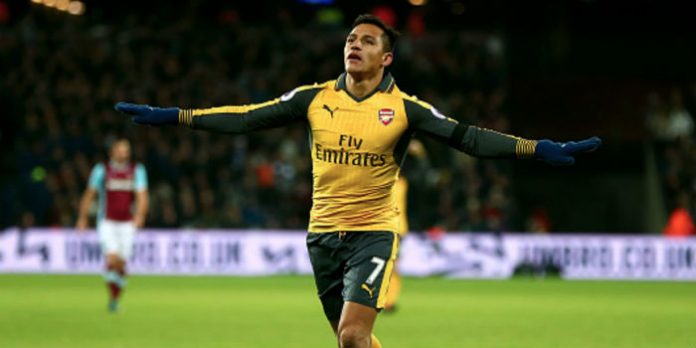 It’s rare that you see a football manager admit they got something wrong, but Arsene Wenger appears to have done just that, saying he was too hasty to write off previous experiments with Alexis Sanchez as a centre-forward.

The Chilean is having a storming season thus far with 13 goals and 7 assists to his name, and it looks like he’s exactly the player we needed there.

It’s not the first time he’s been played there though, and the Arsenal manager says his previous efforts might have been cut short prematurely.

“I always saw that in Alexis and I must honestly say that when I played him there last year or two years ago I was wrong,” he said.

“The times I tried him through the middle were not convincing and I even remember against Everton I changed it at half-time.

“Sometimes when you have too many players you cannot attempt something which isn’t immediately conclusive because you’re under pressure.

“If it doesn’t work in one or two games and you have a top player on the bench, you’re tempted to change it very early.

“However, this year it clicked very early in the season because he took advantage of the fact Olivier Giroud was not here and not ready, so I was able to give him a run of games and he’s accepted that role very well.”

Not only is he scoring and making goals, he has changed the way the team plays for the better, so it’s working out well so far.

Let’s hope it continues until May.

Let’s hope it continues way beyond May and to next season and the season after that etc.

Converting wingers into strikers could well be one of Wenger’s most memorable legacies.

There’s no coincidence that this successful spell as our front man is occurring alongside Ozil displaying incredible form. Their partnership on the pitch is a joy to behold.

I don’t think Ozil had quite settled and certainly wasn’t performing as consistently when we previously tried alexis up top. I’m certain that has a lot to do with it.

Long may it continue

Let’s hope this transforms into thropies this season

The same was said in the Sky Sports bit where Henry interviewed Wenger. He explained back then that the reason Alexis wasnt moved forward sooner was due to a couple of failed attempts in recent years. What is different here is that he mentions the pressure of those situations, perhaps the fans’ impatience with him and the team during those times had some bearing?

If something doesn’t gel immediately there are acrimonious scenes. Same with young players coming in, pressure to be world beaters from the off.

The idea of AW changing something due to fan pressure is laughable. He does what he thinks is right, support from the stands or no. honestly, I thought he was right to cut the Sanchez up front experiment short when he tried it previously, but like everyone, really glad he went back to it this season!

big ups to arsene for converting like he’s done successfully with many others.

Is it rare or is it when we’re doing well he’s a genius and when we have a dodgey result of two yes sounds out of touch? Judge him in May I guess.

Please Mr Blogger, there is this base ball video advert that kept coming up anytime I want to read news here and interrupt everything. How can I stop this please?

I am a bit surprised about this. Pep played Alexis as a striker in Classicos in his first season, and he played in the middle in his last season at Barca when Messi was injured and did very well. He also has a roaming role for Chile (where he goes wherever the hell he likes). I thought Arsene bought him to be a striker rather than stuck out on the wing. He’s one of those players you’ve got to free of responsibilities and let him roam.

It is different to play as a lone striker in la liga, it is not as physical. Also barca were used to playing with a “false 9”, we weren’t when he was tried as a striker the first time.

He may have played the odd game as a striker but that was never his position while at Barca, I could well be mistaken but there is a certain Lionel Messi, who unless injured, pretty much owns that position at barca, whether as an up front striker or deep laying or false 9 or whatever people call it. Not that they will complaining about it but, since Messi’s debut, Barca have had a real problem in the striker’position, as attested to by Etoo, Ihbrahimovic, and Villa to name a few players who have struggled there. I think Alexis conversion is… Read more »

In some ways I disagree with Wenger. Sanchez wasn’t ready before, and moreover the players around Sanchez, especially Ozil and Theo, have changed the way that they’ve played. Ox and Iwobi have also done their parts in helping up front, and I’m not even sure that Coq was back with us back when he tried this two years ago. Bellerin certainly wasn’t either.

In short our midfield and attack is FAR better than it was just two years ago when this was tried by Wenger. All of that has helped Alexis roam and do his thing more effectively.

The reason he has done well there is because all the team have done better this year. The defence and midfield are stronger – we’ve just spent around £60m ffs! He’s just been jammy that Oli was out for a few games and Theo came back strong!

Agreed. On top of sachez is an incredible player with incredible workrate. This season we have stronger back bone with addition of mustafi in defense. The coq is more mature, elneny is a tidy and relieble player, resurgence of theo and xhaka’s passing ability.

Whereas cazorla and ozil are their usual classy selves.

To be blunt, l don’t think we will b where we are now if we stick with ramsey, wilshere and per. Imho, nowadays, they are very good squad player, but not ones we expect to make the team plays better.

He reminds me so much like augero of city every team needs a player like Sanchez…speed..aggression..will to play his heart out

IT IS SARCASM PEOPLE!

Hope he signs new deal and make him captain

I can’t be the only person who still thinks this is wrong can I? He’s really struggled to hold it up at times and been bailed out by Giroud from the bench. Sanchez is my favourite player, and the best since Henry in my opinion but I still think he is better coming from deeper!

Sell Ozil and buy a striker that can score goals and create goals and play maybe as a world class right back, just ocassionally and if needed.

Sell Ozil? Are you a Tott by any chance?

You are aware he is currently joint top scorer in the league. So my guess is yes you are the only person who still thinks this is wrong.

Hope he signs. Though it seems that nobody has an idea of what type of sums we are speaking for Alexis and Ozil. 200 000- 250 000/week feels like the standard of players of their level in other PL clubs. Those sums we can also afford and should probably pay in this case. Over 250k and you start to think is it worth it, you know they could also lose form in the future.

That’s a really good point by Wenger, we did have other options when we tried before. Not sure we’d have experimented with Sanchez up top this season at all, if not for the failed pursuit of Jamie Vardy, Giroud and Welbeck’s injuries and Walcott’s surprising decision to go back on the wing

The real thing is
Alexis is speaking english now

Bloggs, could you include a discussion in the next arsecast on why you feel we’ve clicked recently.

The team isn’t particularly settled but something has clicked.