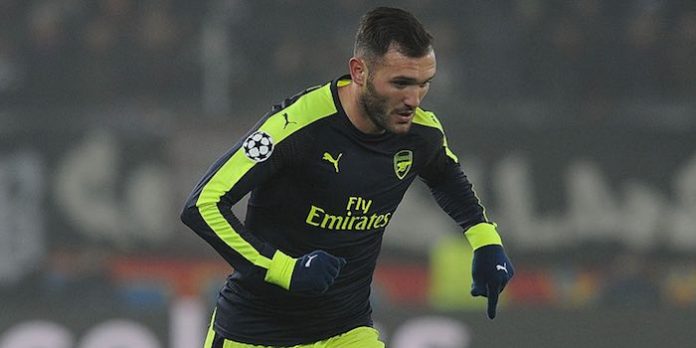 With a 47 minute hat-trick last night in his first European start for the club, Lucas Perez scored as many goal as Sp*rs have in this season’s Champions League.

The 28 year old was drafted in to play on the right hand side, and showed he’s something of a fox in the box, on hand to snap up opportunities when they arise.

He scored twice in the opening 16 minutes, before bagging his hat-trick 2 minutes after half-time. It was a selection decision which worked out well for Arsene Wenger, who was pleased with the Spaniard’s impact.

“The first two looked like quite easy goals, and were what we call tap-ins in England, but they were created by the team and you have to be there to finish,” he said.

“The first goal is a real striker’s goal. He scored more than 20 goals in Spain last season and he has shown why. He has an eye for goal and good movement in the box, which is why he scores.”

Happy to finish first in the group and for being able to help the team with my first Champions League goals #UCL #Arsenal ⚽️⚽️⚽️ pic.twitter.com/GMMRrV3MpK

It means that in just 5 starts and 3 substitute appearances he’s got 5 goals and 3 assists. Let’s hope he starts another 500 games with 340 as sub.

Could have sworn it was a “smell” for goal in the original i/v.

Ozil practising for Shawcross’ head in that picture.

Or John Terry’s…He can speak to Diaby for some tips.

Francis Jeffers is crying into his cornflakes this morning.

Ozil looks like a brilliantly deranged puppet-master, ‘dance for me, ball, dance…’

Lucas or Walcott on the right for Stoke? Or use both on either flanks?

Possibly too soon to start Lucas again, what with the recent injury. I think Ox deserves a start, probably in place of Iwobi, and with Walcott on the right for balance.

And soon we add Welbeck to the mix. I guess he will just have to embrace the role of left wing.

Perez looks like a smart player when it comes to anticipation and positioning, allmost abit like Müller.

So happy we didn’t end up signing Vary and have Lucas instead.

Alexes ..giroud ..perez …wellbeck when fit ….Walcott ..ozil..chambo..iwobi..plenty of goals there back to the days of invincibles

I still think he has 4 assists, including the one vs Soton.

Plays in a similar way to Theo on the right, with even more emphasis on getting into those central areas which works well with a CF like Sanchez. I still see Perez as more of a CF but it’s good to have goals spread around the teams like this!

Lucas should now start on the left. I think he is much more aware in front of the goal. My team for this weekend would be
Lucas Alexis Theo
Özil
Ramsey Xhaka
Monreal Koscielny Mustafi Gabriel
Cech

Hehehe… The headline is a bit of understatement given that he is fresh off a hat-trick. Wenger really has a way with words.

Perez seemed to barely celebrate his own goals. But had the widest grin when Iwobi scored! The man is happier for the kid than himself.. he was happy depor got a great fee for him so they could go invest. He has to be among the top 5 selfless people to have pulled on an arsenal jersey. #heartofgold

And even if Lucas doesn’t score another goal this season. I am so glad we got him instead of that racist pos vardy.

Wenger is a complete imbecile.

Instead of pumping out the dosh for Vardy he waits till end of window and gets a second rate panic buy in Lucas Perezski…WENGER OUT!

Wenger has been reconsturcting the team since he realised the Denilson generation was not mustard. He started adding to spine with experience with expedient buys like Per and Arteta,c rucial in stabilisng the ship when we were faced with key departures for 3-4 seasons. 3-4 seasons ago, he started to slowly add quality. Santi, Ozil (42.3m panic buy), Alexis, Cech, now Granit and Mustafi, were players brought in at sunstantially higher price points (or should be) considering we finally freed ourselves from the shackles of austerity following stadium move and crucially sponsorship re-negotiations. Whether we could have done this slightly… Read more »

This team reminds me of the invincibles. Whoever gets picked upfront scores. I remember Reyes, RVP, Henry all firing on all cylinders. Been longing for that feeling forever now.

What about kanu and bekampg?