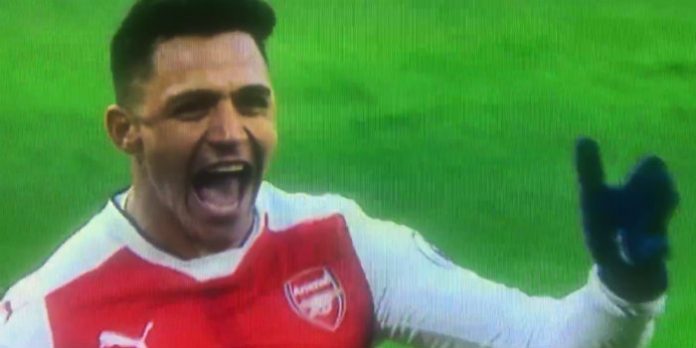 As you can see from the shots chart (which maps a very basic xG metric) Arsenal jumped out to a strong start against Sean Dyche’s men notching about 1.5 goals worth of shot quality in the first half. Arsenal kept that pressure on in the second half all the way until Özil’s corner was back-headed in for Mustafi’s first Arsenal goal.

Then came the flat spot. It’s not unusual for Arsenal to settle into a defensive posture for five minutes or so after scoring a goal but that flat spot for Arsenal lasted for over 30 minutes. This is no doubt largely due to Xhaka’s red card. Burnley stepped up their attack after Arsenal were reduced to 10 men but only 0.5 a goal’s worth.

It’s actually kind of pathetic that Burnley couldn’t generate more against 10 man Arsenal. But, that’s when Jon Moss stepped in! Awarding Burnley 8 minutes of added time and a penalty. That penalty gave Burnley almost an entire goal’s worth of shot quality.

Sadly, Moss’ work was undone by the linesman who (incorrectly) missed that Koscielny was offside and (correctly) flagged for the high boot to Koscielny’s face. Arsenal were awarded their own penalty, which sent them over 3 in the shots quality metric.

I like this graphic because it shows us quickly how much the red card and penalties changed the game.

*Of course there is no guarantee that they would have taken as many shots as they did last season, though Arsenal are actually taking MORE shots this season (15.6) than last season (15.1). Still, the point is nearly miniscule differences in finishing make huge differences over the course of a season and change whether a team is a title contender or not.

I wear no socks

Bertieme
Reply to  I wear no socks

With the Xhaka / Ramsey MF starting to gel, Xhaka red card is a blow not only because it leaves us very light in that area.

I still think Arsenal are still trying to walk the ball into the net.
Until this changes ie they go direct ,they will struggle to score against well organized sides
and lose to the likes of MC/MU/Pool/Spurs and othe r counter attacking teams
with speedy strikers.

When you play possession in the opposition third, you really CANNOT shoot because of the ten men that have fallen back in formation for defence. So if you play possession-based, you walk it in (and you need to be a bunch of high quality players that can ball-play ‘errorlessly’) because that’s the only way you’ll find a shot at goal.

Does anyone know when Elneny is back? Will we have him for Chelsea?

Their final group stage match is on Wednesday. There’s a possibility that they go out if they lose the match against Ghana, but they might still end up going through. And with a draw or a win they will go through. So no one really knows when he’ll be back.

Nice to see that hoary old walk the ball in chestnut getting a mention.
Everyone struggles to score against well organised sides and everyone is vulnerable to teams that can counter well at speed.

So if Arsene bought Griezmann we’d basically clean up?

Xhaka: “The next three games will define our season.”

Well, Xhaka did this for the 5th time if I am not mistaken. He got sent off twice and he conceded 3 penalties(2 for sure) since joining Arsenal. Now he said he wouldn’t want to change his style of play and I’m fine with it, but someone needs to take time and help him to channel his aggressive no nonsense way of play in the right direction, otherwise he’ll cost the team too many points and too much stress for fans.

Jon Moss is an a**hole. He needs to retire, and quickly. It’s clear that he has a major bias against our players.

The worst thing Jon Moss did was letting Burnley timewaste all day long with their throw-ins, free-kicks and goal kicks taking 15-20 seconds on average. Then when Coquelin leaves a free-kick for Cech to take after we were 1-0 up Moss makes the “no timewasting gesture”. That made my blood boil. If anything timewasting is hurting the sport. Also Alexis should have had a penalty in like the 10th minute when he was shoved in the back and the Mustafi one was very much like the one Burnley got. Still, we shouldnt have to look at the referee. We should… Read more »

If an opposition player did to us what xhaka did I would be calling it a red card too. Check the camera angles. While it might not have been the reddest red I’m not surprised it was given… Such a brain meltdown, so unnecessary 🙁

was thinking the same thing. I always wonder why goalies never gamble and just stay right in the middle sometimes. Maybe fake diving then just try to react from the middle. Both penalties (and almost all of Santi’s) would have been saved. Seems like players are all going down the middle now…

Well, that penalty Cech ‘saved’ against Maribor was actually the striker hitting the post.

You have to admit Burnley penalty was blatantly a penalty and for us it was not a high boot so much as a low head but as Keown pointed out it just evened things out because Mustafi was obviously fouled in the box with nothing given. Both Xhaka challenges were yellow cards. Barely any contact with the player in each case. Guilty of stupidity anyway as was Coquelin for that stupid challenge that gave them a penalty.

If you kick someone it’s a foul. If it’s in the penalty box it’s a penalty. If kos hadn’t ducked to head the ball the contact would have been with his shoulder.

The burnley one and the mustafi one were both definite penalties.

All three were stupid,needless challenges.

And whether the linesman missed that Koscielny was offside is irrelevant to the award of a penalty for dangerous play, according to the opinion of a referee (can’t remember who) who was prepared to comment on the decision. A high boot with studs exposed like that is dangerous play, and in the box that’s an automatic penalty, irrespective of whether the ball was (or should have been) in play at that moment. In fact, Kos moved back onside just as the ball was kicked. It would have taken a video replay to establish whether he was offside or not at… Read more »

Incidentally, I’ve just heard a discussion on the Arsecast Extra as to why the high boot penalty didn’t result in a red card as well. Might this because of the “no double jeopardy” guidelines in force this season?

No, that’s not it. The change to the laws for cards for penalty kick offences applied only to “DOGSO” incidents (denying obvious goal scoring opportunity), and then only to fouls committed with the feet – i.e., sliding tackles or tackles from behind. For offences committed with the arms or the body, such as handball preventing a goal or barging someone over from behind chest-to-back, that’s still a red card.

I don’t think Mee’s challenge on Koscielny warranted a red card, although I do believe he should certainly have been booked.

Xhaka got a straight red.

Not sure how you get 2 thumbs down for stating a fact! Both Xhaka red cards have been for fouls in nothing areas of the pitch; he’s not even “taking one for the team”. We also saw at least one other wild lunge yesterday in midfield touchline area that could have had same result if only he’d made contact. His penalties have also been for offences against players who were facing out of the area – totally unnecessary. Coq, Mustafi, Nacho and Kos are all guilty of hanging a leg out at players in the box rather than making proper… Read more »

I thought the new offside rule was that if the player has a part of his body that can be used to play the ball within the laws of the game that he was offside, but I could be wrong.

It’s as if 7 minutes is the new 5 mins added time and 5 mins is the new 3! Since when did they decide this. Great finish tho, it’s what keeps us coming back for more

Excellent work as always. But, our penalty was a penalty regardless of off side. The rules for dangerous play wipe out any offside infringement.

Agree with you but Moss didn’t show a card to Mee for his foul. Therefore, according to Moss that foul was an ordinary foul and so should have been cancelled out by Koz being offside. Moss had a terrible game but really it was not particularly worse than any other ref performance this weekend. Hull had a clear penalty against Chel$ki which was not called, for example.

You’re mixing up two laws. Discipline, meaning cautions or dismissals, is not affected by an offside. But subsequent fouls are. This exact issue was raised in an “ask the referee” forum a few years ago, albeit in a different scenario. This was the question: “I was the Center referee for an A division match. There was a through ball for the attacking team, the forward run through to dribble into the penalty area. The keeper runs out to stop the ball, and missing it completely, and collided with the attacking player and took him out of play. I was near… Read more »

So Moss and crew f***ed up that call even more egregiously than I thought. They missed the offside, mistake 1. Mistake 2, they called the foul on Mee which because of mistake 1, was allowed to stand when it shouldn’t have. And regardless of those mistakes, they failed to dismiss Mee for dangerous play, kicking an opponent in the face. THREE mistakes on one incident; only PGMOL would condone that. LOL

Unlike many others, I have no problem with Cech’s not stopping any penalties recently. Goalkeepers aren’t supposed to stop penalties! Penalties are supposed to be pretty much automatic goals for the attacking team.

If that’s all anyone’s got to bash Cech with, then I think he must be doing a pretty fine job.