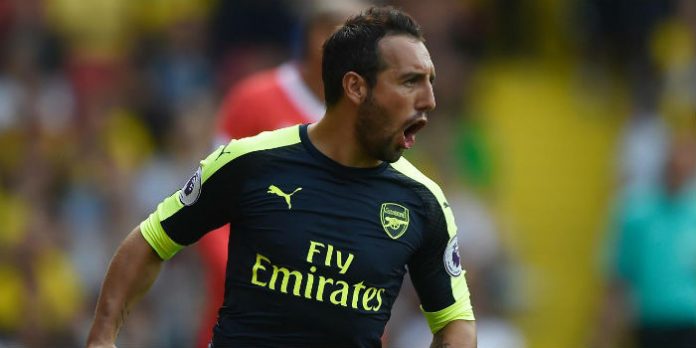 Arsene Wenger has revealed that Santi Cazorla has had another medical procedure to help cure his ongoing Achilles problems, and has cast further doubt on the Spaniard playing again this season.

The midfielder underwent surgery back in December, but further treatment has been required, meaning he’s going to be sidelined for much longer than first thought.

Last week the Arsenal manager said he was unsure when Cazorla would play again, and delivered more bad news on Friday.

“He had a little procedure,” he said, “and I have a meeting with the medical people today to see what it was.”

“Certainly he will not be available in the next six weeks, that is for sure.

“I hope he will be back this season but you have to count six weeks preparation and right now he’s not at that level.

“Let’s hope he can come back in the next three or four weeks on the pitch.”

Not much we can say other than get well soon, and let’s hope he can find his way back to fitness quicker than it appears right now.

6 weeks, like seriously…?
We clearly miss him in the engine room and no replacement with the same skill available for us at the moment

Does it sound as though the player is deciding on his own treatment rather than the club? “He had a little procedure,” he said, “and I have a meeting with the medical people today to see what it was.”
A bit bizarre.

It’s his body. Of course he’s deciding his own treatment under the consultation of experts.

He is the magic that makes our team click. I feel with him missing we are missing a massive link between defence and attack. Get well soon you little diamond

im with u there mate, get better soon boy arsenal need u back☺

I believe our title push this season would be much better if we had this little guy in midfield still.

For me our title push ended when he got injured. We’ve not got anyone who can evade the press like he does, he’s so important to us.

Agree that he’s so important to us for evading the press — and so much more. Still, I’d like to believe in this squad’s title hopes whether or not he’s on the pitch.

Yep, since he’s been out we’ve regularly been getting caught out by The Sun, The Daily Star and even NOTW

I agree. And gutted for santi to say the least. Arsenal are a far inferior team without him. Wenger needs to find a like for like replacement for santi. Even with the current plethora of central midfield players available their is not one who can fill the void that santi leaves.

Hope it went well. Good luck with the recovery. Hope to see him on the pitch when fit. We miss him v.much.

One of my favorite Arsenal players. Wish him a speedy recovery and long may we be bless with his perpetual happiness, thigh grabs and of course, amazing play.

With this injury I believe we’re favourites to win the Injury League once again!

Cazorla’s career in doubt you might as well say.
Was hoping to see him play for us in the latter stages of the season. Bummer

The way Wenger wants to play demands that Cazorla start every game. I think our game is predicated on technical superiority and without Cazorla it becomes very difficult to make a compelling argument against the best of the best. In fact, I think there are almost no players in the world who are as gifted technically as our little magician. Without him , we are shorn of technical security and efficiency with the ball. If we are to make the jump to the tier above (Real Madrids and Bayerns of the world) we need to find more players of his… Read more »

He’ll be back in mid-March for run-in, cup final and Cardiff. Why did we not have a recall clause in January for Jack? Silly stuff. Speaking of stuff, let’s stuff Swansea and watch Leicester cane Chelski and Everton come from a goal down to beat Man-shitty 2-1. Please let ours be a stress-free away win 4-0 after the last two weeks. COYG

Stay strong Santi, there’s a lot yet for you to contribute, and I’m looking forward to it!

I hate to say i said so, but it was pretty obvious to me that his Arsenal career was over. But i was shouted down and voted down and asked to go and see the movie on Achilles and learn about some Greek mythology. You didnt need all that to know that a 32 year old suffering a knee ligament and an Achilles in one season needed to belQ we very carefully managed the following season or his career at the top level is over. Instead, we played him week in, week out, till the inevitable happened. Achilles is known… Read more »

Wow. Why don’t you apply for the physio role at Arsenal, I mean you know eeeeeeeverything.

Argh fuck Billy, this is bad news. Our midfield is only ever at its best when Saint Santi is there pulling the strings.

Best wishes, Santi! I hope you have a speedy recovery and are back on the pitch soon.

Injuries happen, its part of the game but it was a very stupid decision to have played him as often as he did. You must manage the fitness of key players but Wenger would never change.

November 2017: Carzola to be out for 3 months following an injury sustained in a game we should be equipped to win without him….

Why not
Reply to  Higihaga

Ok. So now the manager is also to blame for the strength of someones achillis tendon. People get old, people get injured.

Anything to blurt out what you want, right.

Higihaga
Reply to  Why not

What did I blurt out? I said injuries are part of the game. No matter how careful we managed a player’s fitness, they could still get injured but we should have done our part to reduce the risk. Age is not an excuse.

I don’t believe that we need a new manager he is not the one diagnosing the players and making fitness schedules. Wenger is on the other hand relying on his medical staff and their ability to do their respective jobs. Unfortunately it seems like year after year arsenal are cursed with an over abundance of injuries to key players. Especially when one looks at the other top teams. I though we had this fixed but obviously not. Wenger can be blamed for some things but not this.

The ultimate responsibility lies with him! He’s the boss, they all report to him. He needs to combine medical advice with his experience. He overplayed him early on.

we need that smile on the field, and in our lives!

These ‘little’ procedures have an amazing habit of ending seasons. I think Sanogo is probably the next OA at this stage…

Hope he plays again this season,but starting to look like rosciky all over again ,such talent going to waste fingers crossed

Shades of Abu Diaby. He is done

We have a replacement, but he’s loaned out. His name is Jack Wilshere.