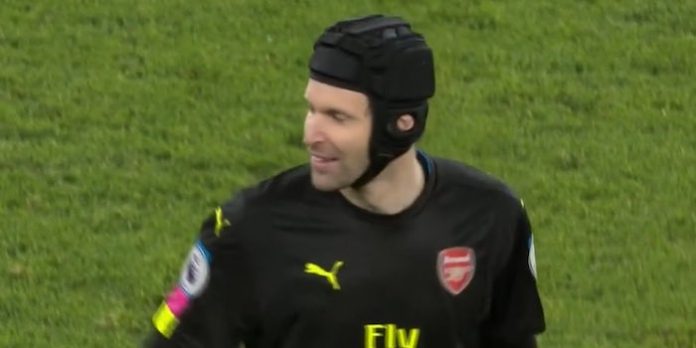 Petr Cech has hailed Olivier Giroud after his beautiful goal yesterday, and said the French striker is the kind of player any team would love to have.

Giroud has now got 7 goals this season from just 4 starts, and he’s notched crucial strikes against West Brom, Manchester United and Sunderland in that time.

His opener in the 2-0 win over Crystal Palace yesterday was something special though, and the 34 year old goalkeeper, who has seen plenty of great goals in his career, was quick the laud the finish and the man who made it.

“I always keep saying that he’s one of those players who you love to have in the team, because he’s a handful and he can score important goals,” he said.

“As we know, he scores important goals, no matter if he starts or if he comes off the bench. He’s always a threat.

“When you score a goal of the year on the first day of the year, you put the bar really high!”

And Cech pointed to defensive solidity which provided us the platform for three points.

“What was most important was that we stayed solid at the back and we didn’t concede,” he continued.

Good run of games coming up. Lets hope we keep winning then beat Chelsea early February. We have a strong squad, no Santi, Mustafa, Ramsey starting, let’s keep it going.

Though there is only a fine line for many between ‘love to have’ and ‘love to hate’.

The word “Fickle” comes to mind.

That goal, three points and a clean sheet. What a way to start the new year. Giroud and Čech both showed how important they are to this team. Long may it continue.

santori
Reply to  The Little Mozart

You don’t say. Cech kept us in it in a shaky spell from minutes 60-70 Plenty of room for improvement. We could have been punished in that spell but for Wenger’s master stroke in nicking the keeper off of Chelsea. Along witih Santi, these were absolute coups that most people tend to gloss over. Think of the teams that could have benefited (and had the money to pay for) such players. Yet some still think they know better about transfers than Wenger.:D We need to also be sharper in front of goal and hit those shots like we really mean… Read more »

Giroud wonder. He is a very sublime striker, not blessed with explosive speed but deceptively very agile. When a man does well he deserves praise. STOP HATING. GUNNER 4 LIFE.

The other thing is considering his game isn’t centred around ‘pace’, he may be able to keep at it at this level for a good two to three seasons more.

Wenger doesn’t do things without a long term plans. He has built and bought around the squad with plenty of the future in mind.

Cech coming out of his goal more now which is nice, probably wenger asking him to command his area as there were some goals conceded where he could have come out and stopped the cross. Hope he finds a balance in that aspect.

Van Persie (makes sign of the cross) really came into his own at the age of 28-29 … I wonder if there’s still more to come from Giroud? Here’s hoping…

And a shout out to Cech who brings so much maturity and experience to this side. Earlier this season after a champions league game he came out on to the pitch to chat with Ospina and congratulate him on a fantastic performance.. what a lovely man he seems to be.

Giroud is at his peak right now.

He continues to improve his game and we may see similar efficiency from him in front of goal as RVP.

Per games played for Arsenal, he has been one of our best scorers ever.

With the amount of pace around him, Giroud does not hinder any mobility in the team. Indeed, he is an important asset not only to play off of but who is also now finding his own creativity in front of goal.

A shout to Flamini. He may have lost the foot race to GIroud ( Must be the weight of all the money he may one day sink into Arsenal and buy over from Kroenke) but he was a quality player for us. Much like Per and Giroud, highly underrated. Flamini held for us last season alongside (The difficult to play with) Ramsey over a period where we were shorn of many of our best assets. That midfield managed over wins against City and Olympiakos. Ironically it was when those top assets returned that we lost our goalscoring edge and Ramsey… Read more »

What a majestic piece of skill that was from Giroud. I’ve seen a lot of football in my life, but that is definitely up there with the best goals I’ve ever witnessed. I remember seeing one just as good back in my playing days, Frankie Smith was our outside right and he beat six players and did a Cruyff turn around the keeper before smashing it into the top corner just because he could. That was one made all the better by the muddy pitch and the old-fashioned leather ball with laces in it. Frankie was a real character though.… Read more »

Trust me, I search for your name on articles all the time, Pete. Please, o please, never stop your rambling.

Can the people that thumbed down Rambling Pete please have a word with themselves. Thank you.

That’s the sort of (good) gibberish alas diminished to in the presence of such “world class” talent.

If Zlatan did it (and he did), the media would be having a wank. Instead Souness will try to paint it as a huge slice of ‘luck’.

Luck is a necessary ingredient but there is nothing lucky about the audacious creativity in attempting it. Its the sign of a maturing player at his peak.

Anyway, a couple of sentence spacing might make the gibberish have a slightly more readable sheen to it. Try that.:D

I don’t get the “Plan B’ nonsense. Giroud scores goals, brings our speedy assets into the game, holds the ball when we play out from deep. Why on earth would we only use him as a sub? Doesn’t make any sense. This is a player in form who has scored 8 in his last 6 starts fro us, 6 in last 4 PL. He has strength in the air but also scores plenty through feet. He has added an audacious creativity to his game. He thrives to bring in players who are quick that love to play off of him… Read more »