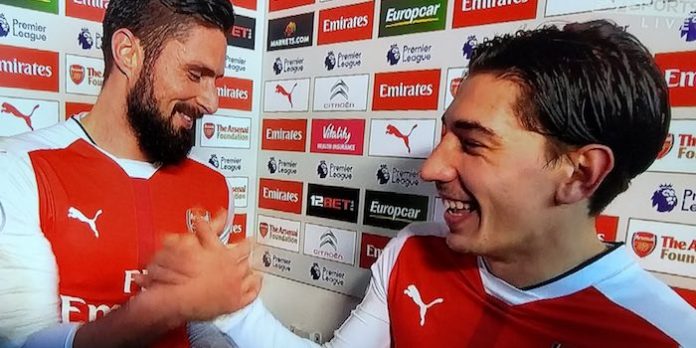 Olivier Giroud and Hector Bellerin spoke to Sky Sports after the 2-0 win over Crystal Palace today, talking about the win and, of course, that amazing goal from the French striker.

If you haven’t seen it, check out the links in the match report.

How important the win was

Bellerin: It was important to keep up with everyone else, we have a few games we need to win and get on a good run if we want to be up there. It’s a great start to the year.

Giroud on the goal

Giroud: Alexis gave the ball a bit behind me and I tried to take it with my heel. I had maximum luck! Yeah, I had good balance. It was a great feeling, I wanted to score early from Nacho’s cross but I was a bit short.

So it’s nice that I succeeded to get a nice one for the team.

Was Henrikh Mkhitaryan’s similar goal last week in his mind?

Giroud: I tried to deflect it, in this position you can only try this one thing, so it’s nice for me and nice for the team. It’s definitely one of my best.

[We enjoyed him absolutely not answering the question!]

Bellerin on the goal

Bellerin: Woah, I couldn’t believe it. It was a great goal. I’ve seen Oli do stuff like in training, so we know what he’s capable of.

It was also the first goal of the game, we had a lot of the ball, a lot of chances, it’s nice when you finally get one in.

On the Bournemouth game on Tuesday

Giroud: We need to keep going, we need good momentum to stay up there, the teams in front are doing very well. We need to respond, and it’s nice to win the first game of the year.

What a hit. What a way to ring in the new year.

Giroud’s Scorpion on-side goal is the best ever!

Keep going. That’s exactly it. We need another 3 points next game which is in two days or less. Superb shift by Giroud not just on but off the ball as well. He’s scored 8 goals in his last 6 starts. Clearly all those saying he is a “Plan B’ are talking out of their arse. The big man is “world class”. Had Zlatan scored that goal they would be wanking off to it in the media. Thought Granit was also superb today (particularly with Ozil missing. He is an exceptional addition by Wenger as is Mustafi. Wenger has made… Read more »

All those numpty fans giving up on the title already, take that. Fighting spirit. The whole league positions can change so quickly with half the season still to go. Look at United, they are only 3 points off City. City have dropped to 5th, Liverpool are only 3 ahead of us and we have to chase them down now. Chelsea may be running away with it (or if you believe the twit Savage, we should give the title to them over half a season), but they could drop too. Two draws in quick succession and they are only 5 off.… Read more »

The kind of ridiculous questions they ask on S** Sports (re comparisons to the Mkhitaryan goal), everything is just set up for drama and a ‘narrative’, isn’t it?

Unbelievable goal. Up there with Dennis v Newcastle and Jack v Norwich.

might also mention, Henry vs Spuds, vs Liverpool, vs Scum Utd 😉

Wow!..that’s what everybody can say, including the anti olli pundits!
contender for goal of the season, in my opinion.

Can’t describe how I felt… that birthday gift (for me) made us (my daughter and i) scream a bit loud…. what a tremendous collective goal and extraordinary finish !!! Thanks guys 😉

Such a wonderful goal, oozes with class. Finished with aplomb and the skill of a seasoned ballerina.

Bad cross, much luck, but bravo, Olivier! It won’t challenge Mesut’s goal against Ludogoretz though… by far…

Ian wright, his comments when asked to pick between Ollie and Mikitharyan’s efforts is just unbelievable! He was a fantastic player, but he’s starting to annoy me

I’ll give you a comment – one was offside and other was beautiful.

That cross from Sanchez was tailored with great intentions with an eye for the spectacular and of course GIROUD NERVER DISAPPOINTS!!!

A lot of luck but also a lot off skill… hats off to oli what a goal. definitely goal of the season so far its going to take something really special to beat that

‘MKHITARYAN’S GOAL WAS THE TRAILER, GIROUD’S WAS THE WHOLE MOVIE’. I love this one!

The only thing better than O.G.’s voal was the sound of the massive *GASP* from the Emirates crowd when they showed the first replay. Wonderfully chilling stuff.

Anyone else find it amusing that this comes just days after Wenger’s comments about the EPL not producing the spectacle so far this season?

Bellerin [after Giroud had admitted he’s never done anything like this before]: …It was a great goal. I’ve seen Oli do stuff like in training, so we know what he’s capable of.

What a funny character, that Bellerin is. Must be great in the locker room.

I think I`ll give it to Makkaattahryan as he plays for a very shit team, impressive that he can score goals at all for a team that sucks so badly, Giroud on the other hand has an easy job for a superb team from London, the best city in the world.

What a goal big olie great asset and great profesianal get in you gunners and do 1 sp**s your shite.

Great goal up ther with Bergkamp,Henry and Wrightys best but that is all Giroud will be remembered for just like Rene Higuita

…..only Higuitas was better and Bergkamp, Henry and Wrighty won titles and doubles.

I wish Giroud had responded to Sky’s Mkhitaryan question with “Yes, I concentrated to stay onside.”