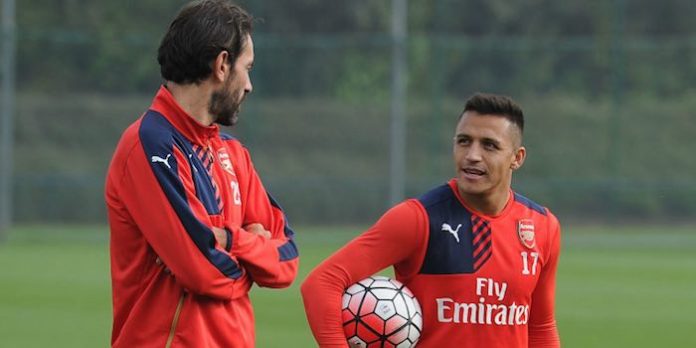 Robert Pires has praised the nerve of Alexis Sanchez after his 98th minute Panenka penalty secured three points in the 2-1 win over Burnley on Sunday.

The Chilean grabbed his 17th goal of the season to win the game in dramatic fashion, and the Arsenal legend paid tribute to the forward in an interview with La Tercera.

“You have to have balls to take penalties like Alexis,” he said. “He doesn’t know what pressure is.

“You have to think that the 98th minute was being played and Arsenal weren’t winning by a three or four goal difference. It was one-one.”

Pires also revealed he’d spoken to Sanchez about his future, but it sounds as if there’s no decision been made yet and that it’s still between his people and the club.

“I spoke to Alexis last week and asked about the renewal,” he said. “He told me he didn’t know, that he only cared to play.

“The renewal is not a subject for Alexis. He doesn’t know what is going to happen, he just wants to play and enjoy.

“All we want is for Alexis to remain at Arsenal. I hope he renews his contract because he is a wonderful player. Alexis is the engine of the car.

“I hope he stays forever.”

I have to balls too!

I did masively shit myself when I saw him lining up to take the peno, because as the Sky Sports graphic depicted he’d only scored (I think) one out of his last 4 or 5 peno’s and I cant imagine that wouldn’t of crossed his mind once or twice before taking it. So opting to chip it down the middle took balls the size of baked potatoes, because if he missed it …the scenes would of been unbearable.

When the ref pointed to the spot I said something like “it must be Ozil or Giroud, not Alexis.. Oh, f***, there’s nobody left on to take it ahead of him. Oh God, he’s due to slot one, right?”

Yeah – I genuinely didnt watch the penalty live, my heart just couldn’t take it. As Alexis was lining it up I proceeded bury myself into my dogs bed as he was snoozing, much to his bemusement, and both myself and my labrador waited for my brothers reaction of either joy or burning intense rage.

I got mauled by a dog once… now I sometimes feel a little tingly, and not in a nice way, I tend to get overly excited, and sometimes I punch people in the face for no apparent reason.. I used to love swimming, now I am terrified of turning the tap on. .. where am I, is this real. .so anyway… yeah.. I love dogs

Pires talking dirty, i’m off to the jacks, back in 5.

Thats not even clever

If by too much you mean someone trying too hard to be funny then yes..

This panenka was balls, but little balls compared to the one he pulled to win the Copa America for Chile in 2015.

Remember, Chile had never won a tournament, ever. This was the most important moment in their sporting history. Incredible nerve. National hero.

Not really. He took that when Argentina had already missed two. There were two penalty takers behind him to pick up the pieces. For us, it was our season on the line.

Doesn’t feel like a good sign when I hear that. Usually they know if they want to stay.

Maybe he meant he didn’t know anything about what’s going on with negotiations?

I’d take that as a good sign if he meant what I hope he meant.

Jesus fucking Christ that clip is dark.
Been a while since I saw the Shining – probably shouldn’t have recommended it to my 8th grade students, on reflection

Hey, some of us are Christians on this site. Blogs sort it out. If i said holy f**king Allah i would expect muslims to be offended.

I’m there are people of all faiths and none on this site, and I would always ask that people are respectful to that, but ‘Jesus Christ’ etc is just an exclamation of surprise/shock. It’s not meant as anything more than that.

That wasn’t what he said and you know it. Maybe in the UK it’s nothing but here in Africa using that word in as a middle name for our Lord is highly derogatory. Good thing we don’t kill for our God neither do we fight for him. He’s merciful

Indeed, here in the UK it is nothing. Even in catholic Ireland where Blogs lives, too….
If it’s highly derogatory in Africa (what – the entire continent by the way?) then don’t use it there,
God is merciful indeed, so no need for you get offended on his behalf.
Peace.

Here in the western world most people stopped caring about that nonsense a long time ago.

Godfrey – as I said above, there are people from all faiths, and it’s nobody else’s place to belittle that.

If you don’t believe, fine, but let’s not turn this into some kind of pointless argument.

Well said Blogs. Respecting peoples rights to believe what religion they want to believe is fundamental to the world being a much happier place.

Yes, in the UK and Ireland it’s used all the time, not considered blasphemous or offensive.

For example, the kids are running around making noise.

“Jesus Christ, keep it down!”

or I drop the iron on my foot:

Or, if we won the league on the last day “JESUS CHRIIIIIIISSSSSTTTT!!”

I beg to differ. A sizeable minority do find expressions like those offensive. Even today when they’re sadly in common use.

Mr. Blogs ended his live blog (just after the made penalty this article centers on) with the phrase “Jesus Fucking Christ” To me it seemed more appropriate than his usual thanks for your time sort of ending but I know that phrase is not for everyone.

I didn’t watch the match live (Arsenal vs Bunley), followed it on the live blog and I must say I was totally disappointed when I saw the closing remarks cos am a man of faith. I couldnt stand to look at the page any longer. I still love blogs though (well, unless he continues to use the expression on his blog)

Sorry blogs, I’m originally from Dublin and just because it’s said quite often doesn’t mean its ok. If i, or everyone else used a racist term every time we were shocked, surprised, or angry doesn’t mean that its right. I believe that Jesus Christ died to pay for my sins, so i don’t want to come to this site and see His name used in such a derogatory way. I am also positive there are many other Christian Arsenal fans who feel the same that come on this site.

I have never in my life heard anyone get upset by this when used as an exclamation. And I grew up and live in a catholic country, often surrounded by deeply religious people who were never upset it. In fact, many of them used it.

Anyway, point noted, but let’s not make this into something it’s not.

Hey mate, I personally worship Jesus Fucking Christ, and your insistence on leaving out his self-given middle name is an act of defamation. Please respect MY beliefs too.

So this post is allowed is it -_- I have to say bloggs I’m slightly disappointed…and not surprised a Catholic thinks its ok to blasphamise the heavenly father seen as the catholics changed and admitted changing the holy day, the sabbath to a sunday. 10 plagues man 10 plagues

“All we want is for Alexis to remain at Arsenal…”
Love him, gooner through and through.

All I’ve got to say is: https://www.youtube.com/watch?v=2rAjily7rME

One can say that his balls were never in question. *I’ll see myself out*

If he had balls, he would sign the contract and stop crying when we are 4-0 up!!

Comments closed on this piece now because people just can’t help themselves.